St Photius the Metropolitan of Kiev 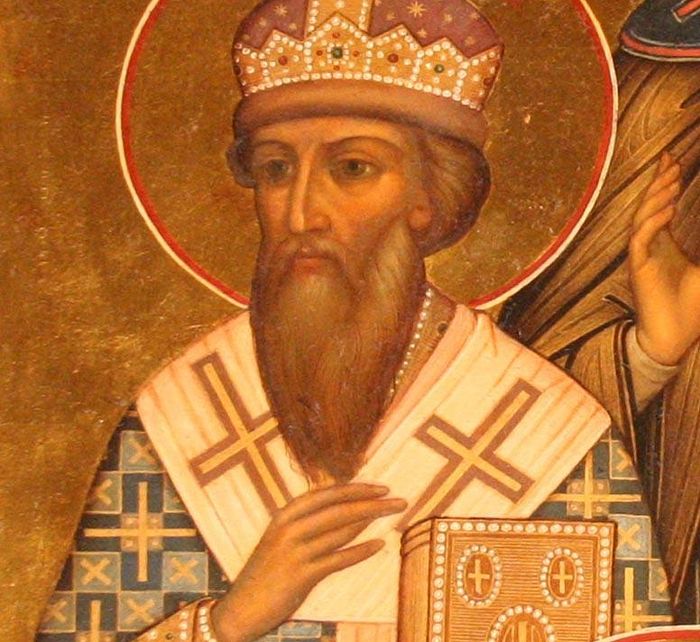 Saint Photius, Metropolitan of Kiev and All Russia, was by birth a Greek from the Peloponnesian city of Monembasia (Malbasia). While still in his adolescence he entered a monastery and was tonsured under the Elder Acacius, a great ascetic (afterwards the Metropolitan of Monembasia). In 1408, when Photius was in Constantinople with the Patriarch on church matters, the question arose about a replacement for the Russian See after the death of St Cyprian (September 16). The choice of Patriarch Matthew (1397-1410) fell upon Photius, known for his learning and holiness of life. On September 1, 1408 St Photius was made Metropolitan and in the next year arrived in Rus.

He spent half a year at Kiev (September 1409-February 1410), concerning himself with settling affairs in the southern dioceses of the Russian Church, then included within the principality of Lithuania, or more precisely, of Lithuania and Russia. The saint perceived that the throne of the Metropolitan, the spiritual center of churchly life in Rus, could not remain in the Kiev lands, where everything increasingly fell under the dependence of Catholic Poland. On the day of Holy Pascha in 1410, Metropolitan Photius arrived in Moscow following the example of former Russian Metropolitans, who transferred their residence first to Vladimir, then to Moscow.

For 22 years the saint labored in the difficult service of archpastor of the Russian Church. In grievous conditions of war, fratricidal strife, and pillaging incursions of Tatars he knew how to highly advance the spiritual significance, the material prosperity and well-being of the churches under the See of Moscow.

Favorable conditions in the Church allowed St Photius to render great assistance to the increasingly impoverished Patriarch of Constantinople, and to strengthen the international position of the Russian Orthodox Church and the Russian realm.

The enemies of Orthodoxy tried to subvert the churchly-patriotic service of St Photius more than once. In the spring of 1410, when St Photius arrived in Vladimir from Moscow, Khan Edigei, having laid waste this portion of the Russian Land for two years, undertook a new campaign with the intent of capturing the Metropolitan himself. A Tatar detachment, headed by Prince Talychoi “the Exile,” suddenly and quickly took Vladimir, but God preserved His righteous saint.

The evening before, not suspecting danger, the saint had gone off to the Svyatoozersk (Holy Lake) monastery beyond the city. When the Tatars attempted pursuit, he concealed himself in a small settlement, surrounded by impassable swamps, at the River Senega. Unable to capture the Metropolitan, the rapacious Tatars plundered Vladimir, especially the Dormition cathedral church. The doorkeeper of the cathedral, Patrikii, endured terrible torments and accepted a martyr’s death from the plundering Tatars, but he did not reveal where the church sacred items and treasury were hidden.

Through the efforts of Metropolitan Photius the canonical unity of the Russian Church was restored. The separate Lithuanian metropolitanate, established by Prince Vitovt for the southern and western eparchies [dioceses], was abolished in 1420. In that same year the saint visited the returned eparchies and greeted the flock with an instructive encyclical. The wise and erudite pastor left behind many instructions and letters. Of great theological significance was his denunciation of the heresy of the Strigolniki, which had arisen at Pskov prior to his time. By his wise efforts the heresy was put to an end in 1427.

Important Church historical sources compiled by St Photius are his “Order of Selection and Installation of Bishops” (1423), “ Discourse on the Seriousness of the Priestly Office and the Obligations of Church Servers,” and also the “Spiritual Testament”, in which he tells of his life. Another great work of the saint was the compilation, under his guidance, of the Obscherussk (All-Russian) Chronicle (about 1423).

On April 20, 1430 the holy archpastor was informed by an angel of his approaching end, and he reposed peacefully on the Feast of the Placing of the Robe of the Most Holy Theotokos at Blachernae, on July 2, 1431. His relics were uncovered in the year 1471. Two sakkoi (robes) of St Photius are preserved in the Armory Palace of the Moscow Kremlin. Venerable Euphrosyne the Abbess of Polotsk

Venerable Euphrosyne the Abbess of Polotsk
St. Euphrosyne of Polotsk, the first Eastern Slavic woman to be canonized by the Orthodox Church, stood at the birth of the tangible representation of a spiritual heritage of universal human values.