An "Open Letter" from Athonite Fathers to the Holy Community of the Holy Mountain of Athos is calling for an immediate convocation of the governing body of Mt. Athos in order to condemn the "false council" of Crete and cease the comemoration of the Patriarch of Constantinople on Mt. Athos. 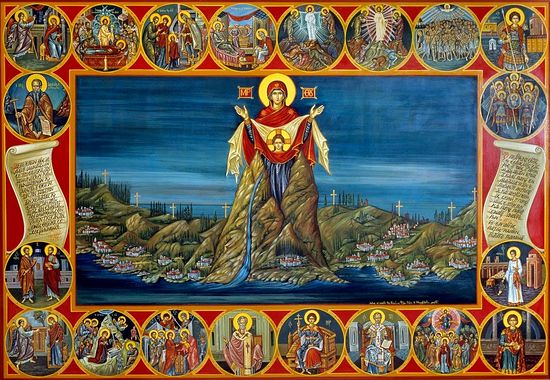 OVER 60 Hieromonk and monks, with a disciple of Saint Paisios, Elder Gabriel of the Kelli of St. Christodoulos (Holy Monastery of Koutloumosiou) at their head, have written an open letter to the Holy Community of Mt. Athos calling upon the Abbots to reject the Council in Crete and stating their intention to cease commemoration of the Patriarch of Constantinople on account of his leadership in the "false council" at which the pan-heresy of ecumenism was given a green light and bolstered in word and deed.

The Athonite Fathers briefly list 12 points of divergence of the Cretan Council from Orthodox Tradition and Faith, promising to return in the near future with an extensive analysis of council and texts in question. Referring to the controversial section 6 of the text "Relations of the Orthodox Church with the Rest of the Christian World," the Athonites see this as acceptance of the Papal-Latin parasynagogue as a "church". Furthermore, as they point out, the text's positive estimation of the decisions of the Dialogue with the Latins (especially the texts produced in Munich in 1982, Bari in 1987, New Valaam in 1988 and most particularly in Balamand in 1993) signifies acceptance, on the part of those bishops who signed the text in Crete, of the "ecclesial character, apostolic faith, authentic mysteries and apostolic succession" of the "Papal heresy." "From this alone," the Fathers write, "it is apparent that this Council has fallen away from Orthodox Faith and Confession."

With regard to the role played by the Patriarch of Constantinople in the promotion both of "the pan-heresy of ecumenism and in particular of the false council of Crete," and the need for the Athonite community to cease his commemoration "until such a time" as the heresy is condemned, the Athonite Fathers write characteristically:

"The Patriarch of Constantinople stands as the chief inspirer and promoter of the Synodical text and as such for us Athonite Fathers, but also for all Orthodox Christians, priests and laymen, he has been shown to be, in word and deed, a Heresiarch, as once was Arius, Nestorius, Bekko, etc., as distinguished clergy and theologians have clearly demonstrated. This is the case not only on account of [his promotion] of the pan-heresy of Ecumenism but also on account of [his promotion] of the Pan-thriskeia [religious sycretism], shown in and word and deed and through common prayer [with non-Christian religious leaders]. He teaches strange dogmas, unorthodox and anti-patristic, and thus, for this reason, according to the words of our Lord, "And a stranger will they not follow, but will flee from him: for they known not the voice of strangers." (Jn. 10:1-5)

In conclusion, the Athonite Fathers write:

"Holy Fathers, the Orthodox Church and Orthodox Christians have been declared undesirable and singled out for harassment. Already at the heretical false council of Crete all those Orthodox Christians who stand opposed to it and reject it, whether they be bishops, priests, monks or laymen, were characterized as "heretics," "zealots," and "hyper-Orthodox." Will we allow this false characterization to pass into the popular conscience? With much humility, fear of God and love for our Orthodox Church we entreat you and ask that we may all stand together so that a truly Holy and Great Orthodox Council may be called in order to reject this false council [of Crete].

Venerable and Respected Fathers of the Holy Community, Holy Abbots, 100 years of extreme oikonomia and tolerance of the ecumenist, latinizing, unionist Patriarchs and bishops has brought about a terrible erosion of faith and fed heretical deviations. The damage and corruption which has been brought about by this falsely-called "oikonomia" in the mindset of the Orthodox clergy and laity is of astounding proportions. We entreat you once again: struggle to guard the Holy Deposit of our Orthodox Church and Faith."

The full letter in the original Greek can be found here: http://aktines.blogspot.gr/2016/07/blog-post_62.html Seraphim Collins7/17/2016 5:51 pm
Thanks to God for these brave Athonite monks and the Russian Church who reject this 'first step' on the One World Religion' bandwagon.

Cherian Varghese7/16/2016 5:53 pm
Shameful that attempts to reconcile are treated like this!!!
Patriarch Barthlomov and the Hierarchs are to be commended for the bold step at Christian fellowship and unity taken in spite of such hateful condemnation.

anthony7/14/2016 6:40 pm
And about time too! Its high time the Phanar is brought to book in relation to his heretical antics. A real council needs to be convened where ecumenism is condemned outright as a heresy and those refusing to repent of this accursed heresy be anathematised. No ifs. No buts. Dr Demetrios Tselegedis asked Elder Ephraim of Katounakia about ecumenism. The elder prayed over the issue and received a response - that in the form of a foul spiritual stench. There was the answer. Ecumenism has an unclean spirit. Again as St Paisios said - you cannot mix gold with trash.