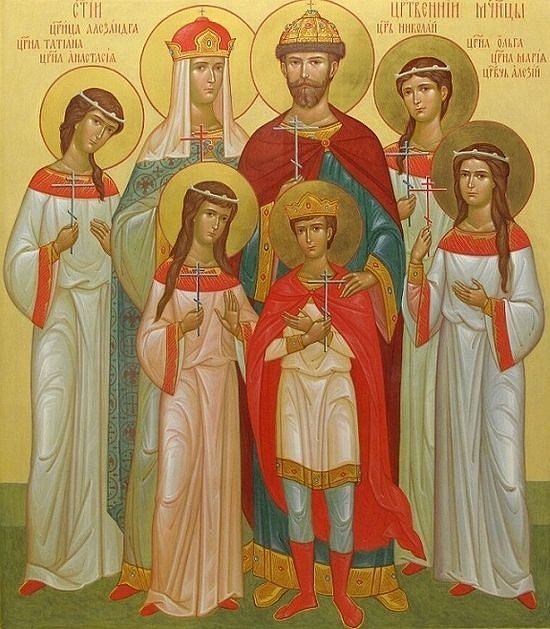 At one time, even fairly recently, the date July 17 in the so-called “new style,” was marked as a day of sorrow, because on this day the Russian people and the Russian diaspora remembered the great evil act when the Royal Family was brutally killed in the basement of Ipatiev House. This was a day of mourning, but no longer! Now the Royal Family has been glorified as a family of holy martyrs. Never forget that when the Church glorifies a saint, the act itself does not create the saint, it only declares to the people that this person or this group of people have been glorified in God.

In the collection of the Lives of Saints we see a wonderful example. Once there was a man who occupied a very lofty position, he was renowned and wealthy, but he left to join a monastery, to become a monk, and took up the life of the ascetics, in fasting, prayer and deprivation. Others lived nearby who shared his way of life, many of them were more severely ascetic than he. Yet the faithful began to flock to him, benefiting from his inspired spiritual discussions and guidance, and the Lord glorified him with the gift of sagacity and miracles. One of the monks asked his elder: why is this so? “This man is an ascetic, of course, but he is no better than the others, in fact, there are others who lead stricter ascetic lives, but are not granted the gifts of discernment or miraculous works, with such spiritual talents. Why did the Lord bestow these upon him, then?”

The elder responded: “This is why: all the others, when they entered the monastic life, became ascetics, but in essence did not much change the world, they simply became monks themselves. So their way of life was not the same as it had been in the world. They did not deprive themselves of very much: they had already lived modestly, without great means, just like everyone else. But this person, renowned, wealthy, at the top tier of social life, took the ascetic step of denying a great deal more of the world than others. He denied his high calling, he refused the honor, he renounced everything else, and that is why the Lord has now bestowed upon him these gifts, for his denial of the world was much greater and more profound than that of other monks.”

As far as the glorification of the Royal Family is concerned, we must never forget from what great heights these people descended!... They went to the depths of terrible suffering, for we know from their biographies what they had to endure! At the beginning, when this wicked deed was committed, their holy names were abundantly covered with filth, oh, what kinds of things they would say about the Royal Family! But all of this, like a shell, has broken and fallen away from them before the entire world, and truly, this family is seen as a purely-Christian family, shining with good works, especially during their years of slander and sorrows. From what great heights they had fallen! Or to better put it, from what great heights did their enemies cast them!

We know that as they endured terrible denunciations and suffering, they shone with remarkable meekness, goodness, all-forgiveness and good will. We know that for this reason the wicked enemies who were in charge constantly changed the guards; they would appoint the most base, the most perverted and amoral people as their overseers. At first they would mock the helpless captives, but later their meekness and kindness, their remarkable good will so affected them that they would gradually soften and become friends with their prisoners. It was for this reason that the personnel would be constantly changed, because their hearts would soften towards their captives.

They continued this ascetic feat even to their deaths, in the spirit of goodness, in the spirit of Christian love, until they were cruelly murdered. The Russian Church properly glorified them as martyrs, because they were killed as such, and they showed themselves to be true Christians their entire lives. The Church has now canonized them, and while before we prayed for the repose of their souls, now we lift our prayers to them, so that through their intercession at the Divine Throne, our persecuted nation, which they loved so much, would be granted mercy by the Lord, that He free her from this terrible yoke, both material and spiritual, which they endure today. NEW BOOK: The Forgotten Tutor: John Epps and the Romanovs
The highlight of the book are the reproductions of the letters, cards and drawings created by the grand duchesses for their beloved tutor, and published for the first time in The Forgotten Tutor.

Thirty-three Portraits of Grand Duchess Elizabeth
Photogallery
November 1, 2014 marks the 150-year anniversary since the birth of Royal Martyr Elizabeth Feodorovna, one of the Russian people’s favorite saints, and honored all over the world.
Comments

GEORGE-ALEXANDER, COUNT TIMOK8/24/2016 3:13 pm
MAY OUR LORD RESTORE THE MONARCHY IN RUSSIA SO AS TO BESTOW ON HER AND THE RUSSIAN PEOPLE THE BLESSING OF HOLINESS.
×