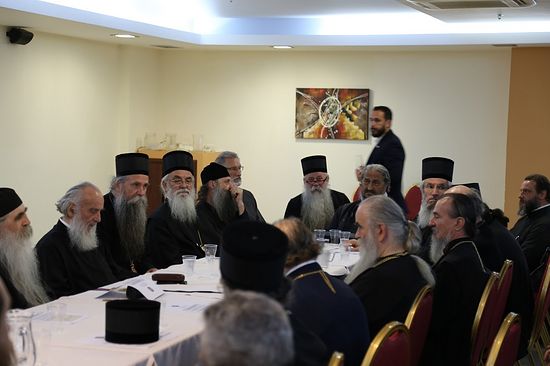 An overwhelming majority of twenty-five Serbian bishops who took part in the work of the Crete Council refused to sign the controversial document called “Relations of the Orthodox Church with the Rest of the Christian World”. The information which appeared in various media has been confirmed by Bishop Irinej of Backa in his letter, published on the Romfea news website.

“I would like to point out that I was not the only Serbian hierarch present at the Crete Council who declined to sign that document (and this stems from the publications of some “well-wishers”). The text was not signed by a majority of our bishops. More than that, the document was not signed by many other hierarchs either,” said Bishop Irinej.

“Consequently, the document is invalid. According to the principle of pan-Orthodox consensus (to which we have strictly adhered since 1961), if a bishop does not sign a document, while his signature is necessary, then this document becomes invalid,” Bishop Irinej of Backa stressed.

It should be noted that right after the Crete Council the above-mentioned document appeared on its official website with the list of all the delegation members of the Serbian Orthodox Church below it, so one gets the impression that the Serbian bishops had unanimously signed this and all other documents. However, in reality only a minority of bishops signed the aforementioned document, which included Patriarch Irinej of Serbia.

Serbian Orthodox Holy Synod seeks postponement of Pan-Orthodox Council
"Our Church feels it difficult to participate in the summoned Holy and Great Synod, and proposes that it be postponed for a certain time: while our pending gathering at Crete, with the help of God, would be regarded as a pre-Synodal inter-Orthodox consultation with the aim of additionally preparing the Synod and improving its texts."
Comments

Наталья 9/20/2018 4:42 am
However, in reality only a minority of bishops signed the aforementioned document, which included Patriarch Irinej of Serbia

Are you trying to say the word Excluded?

budhi ahmad7/23/2016 4:46 pm
Ignorance back darken the eyes of those who feel themselves as the leaders of their own when the devil to snatch the throne as did Lucifer to sit on the throne of God. I am very sad to know all of it. Hopefully they realize.

Priest Nicholas Young7/23/2016 3:38 pm
Seems to me that we need another Synod to review the documents produced by the Synod at Crete.
×