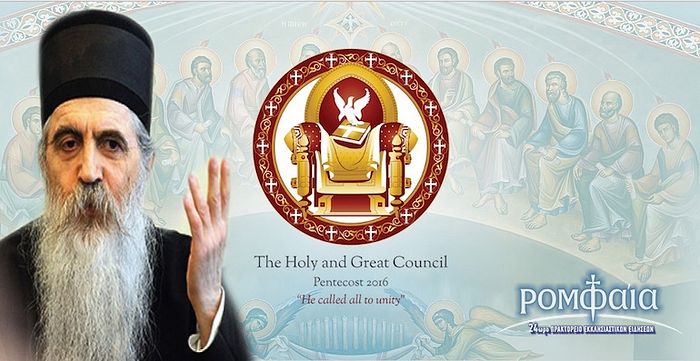 Metropolitan Irinej of Bačka, who took part in the Crete Council as part of the delegation of the Serbian Orthodox Church, explained on the pages of the Greek site Romfea precisely why he refused to sign the document entitled “Relations of the Orthodox Church with the Rest of the Christian World.”

Vladkya Irinej thus confirmed the information reported in Greek media that he was one of those who did not sign the document.

“I did not sign the document ‘Relations of the Orthodox Church with the Rest of the Christian World,’” writes His Grace Irinej, “because the episcopal members of the Council had the right to express themselves, but not the right to vote. At the Council instead of the rule adopted by the Apostles and commanded by the Holy Fathers of ‘one man, one vote,’ another rule was in force: ‘one autocephalous Church, one vote.’ In other words, only the primates of the Local Churches have the right to vote.

From this rule, in his opinion, flows the following:

“Therefore,” concludes Vladyka Irinej, “the difference between an Orthodox bishop and a heterodox observer at the Council is simply that the first can speak at his own discretion, while the second sits silently: neither one could decide anything.”

The only thing a bishop could have done is to not sign a text that does not express his convictions.

“But the main reason I didn’t sign the document is its ecclesiologically ambiguous and dubious contents in a few places which border on heretical teachings,“ Vladyka Irinej explained.

The publication of the open letter of His Grace Irinej of Bačka and the recent statement of Metropolitan Amfilohije of Montenegro on television confirmed that these two delegates of the Serbian Orthodox Church refused to sign the aforementioned document. It is important to note that both bishops played one of the key roles in the work of the Serbian delegation and were present during all of the meetings in the presidium together with the Serbian Patriarch, Irinej.

The statements of these two delegates simultaneously state that the number of Serbian bishops who refused to sign the document “Relations of the Orthodox Church with the Rest of the Christian World” could be much larger.

Delegation of Serbian Orthodox Church will go to Crete, but could leave the Council
Above all, understanding the greatness and significance of the Council, our Church wants, in the spirit of ecclesial creativity, to contribute to the Holy and Great Council’s fulfilling of the criteria and measure of those true Councils which took place in the history of the Orthodox Church, thereby justifying its title.
Comments
×