The Church of the Archangel Gabriel, Nazareth 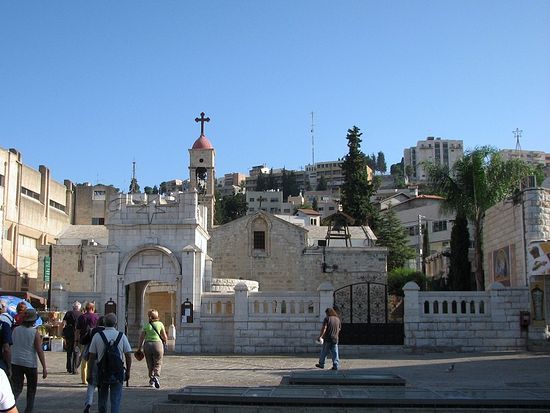 When the Virgin Mary as a young girl was one day in her hometown of Nazareth contemplating the coming of the promised Messiah, the Archangel Gabriel (commemorated today, July 13/26) appeared to her with the glad tidings of the Annunciation:

And in the sixth month the angel Gabriel was sent from God unto a city of Galilee, named Nazareth, to a virgin espoused to a man whose name was Joseph, of the house of David; and the virgin's name was Mary. And the angel came in unto her, and said, Hail, thou that art highly favoured, the Lord is with thee: blessed art thou among women. And when she saw him, she was troubled at his saying, and cast in her mind what manner of salutation this should be. And the angel said unto her, Fear not, Mary: for thou hast found favour with God And, behold, thou shalt conceive in thy womb, and bring forth a son, and shalt call his name Jesus.

To this day, in the city of Nazareth—one of the last cities in the Holy Land with a sizeable Christian population—there is a church dedicated to the Archangel Gabriel. Inside the church is a well that tradition designates as coming from very spring at which the Annunciation took place. This tradition, which originates in the Protoevangelon of James, began to spread from the second century.

There is evidence of a church built in this place only since the Crusades (12th century). However, most likely there was an earlier church built here already in Byzantine times. The current place of worship, owned by the Greek-Orthodox Church, was built in 1750 by Orthodox monks, on top of the ruins of the medieval Crusader Sanctuary destroyed by the Muslims. In 1767, the wooden iconostasis was placed in the presbytery, along with valuable icons of the Jerusalem school.

In the last century, between 1977 and 1978, two Romanian artists decorated the walls of the sanctuary with biblical scenes.

Crossing the church leads to a crypt at the bottom of which flows the water from the spring. The walls of the crypt are decorated with four trefoil arches and covered in marble and enamel. A niche at the side of the altar preserves the spring that flows directly from the rock (from Sanctuary Nazareth).

The fountain of the Virgin and the St. Gabriel 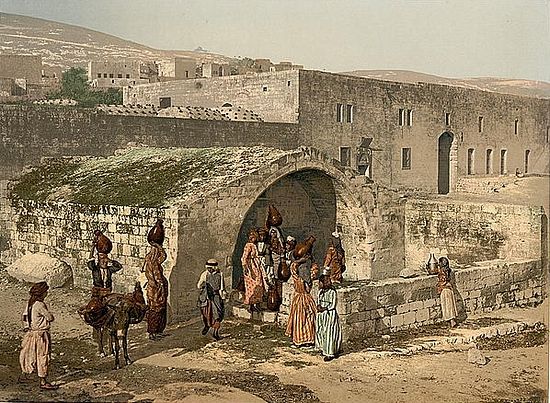 Along the road heading north, in the direction of Cana, there is the “Fountain of the Virgin”, much loved by the Nazarene people, who for centuries have seen the women of the village, armed with posts, collect water, in the tradition of Mary.

This monumental fountain received the water from a spring around 160 meters further north, alongside the mount “Gebel es-Sik”. Today three water outlets are closed, and after many centuries the fountain has lost its function as a meeting place for the local people.

In ancient times the fountain was probably placed just outside the center of the village, while for a few centuries the spring was enclosed in an underground chapel inside the Greek Orthodox Church of Archangel Gabriel, built to the north west of the fountain. For the Greek Orthodox, this is the church in memory of the Annunciation. And thus the local Orthodox people call it simply, “The house of Mary”.

Remembered as far back as the 12th century, the church is amply described by the Russian abbot Daniel: “Then we left this town and went a little way to the north east where we found a wonderful well which was deep and very cold, and to reach the water you must go deep down on a stairway. And above this well there is a church dedicated to the Archangel Gabriel, and it is round.” The local tradition is based on the Protogospel of James, who splits the Annunciation of the angel into two sequences: the first at the well where the Virgin came to collect water. This text tells the story of the annunciation—the place where the Virgin Mary fetched water. The Orthodox have accepted this book as a tradition, and therefore built their church near the site of the Well:

And she took the pitcher, and went out to fill it with water. And, behold, a voice saying: Hail, thou who hast received grace; the Lord is with thee; blessed art thou among women! And she looked round, on the right hand and on the left, to see whence this voice came. And she went away, trembling, to her house, and put down the pitcher; and taking the purple, she sat down on her seat, and drew it out. And, behold, an angel of the Lord stood before her, saying: Fear not, Mary; for thou hast found grace before the Lord of all, and thou shalt conceive, according to His word."

Another version has the even taking place in the house:

And she took the cup and went out to fill it with water. Suddenly, a voice said to her, Rejoice, thou that art highly favored, the Lord is with thee: blessed art thou among women. And Mary looked around to the right and the left to see where this voice came from. And trembling she went into her house. Setting down the cup, she took the purple thread and sat down on the chair and spun it. Suddenly, an angel stood before her saying, Fear not, Mary: for thou hast found favour with God. And, behold, thou shalt conceive in thy womb, and bring forth a son, and shalt call his name Jesus (from Sanctuary Nazareth and Biblewalks). 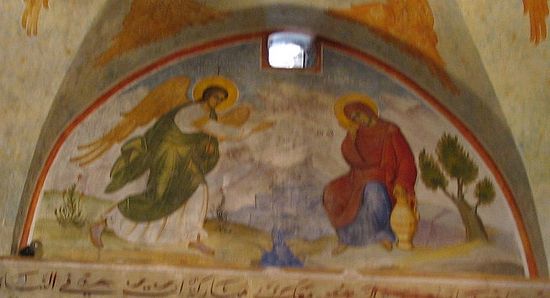 A section in the wall painting in St Gabriel Church, with an illustration of the Annunciation 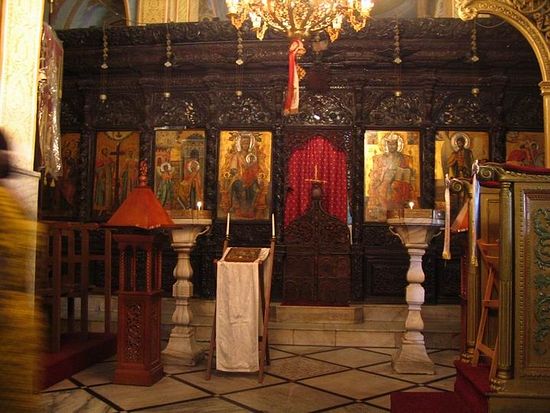 The Church in the entrance level is impressive and charming, as can be seen in the following photo 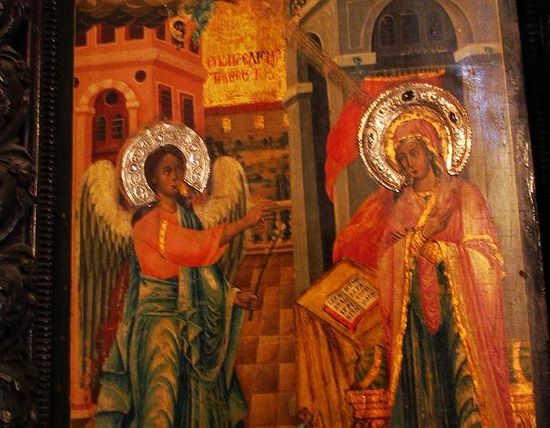 The "Templon", the decorated covered screen with icons and paintings, separates the hall and the altar behind the center table. Some of the paintings on the screen are seen in the photos below. 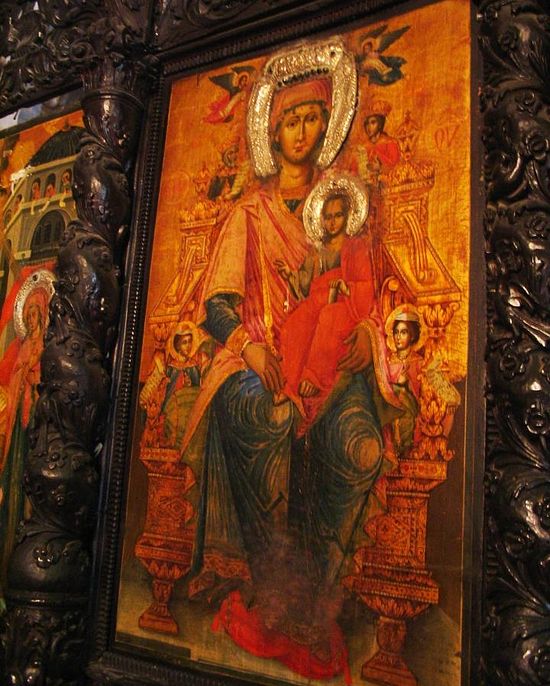 Mary and infant Jesus are one of the paintings decorating the wooden screen. 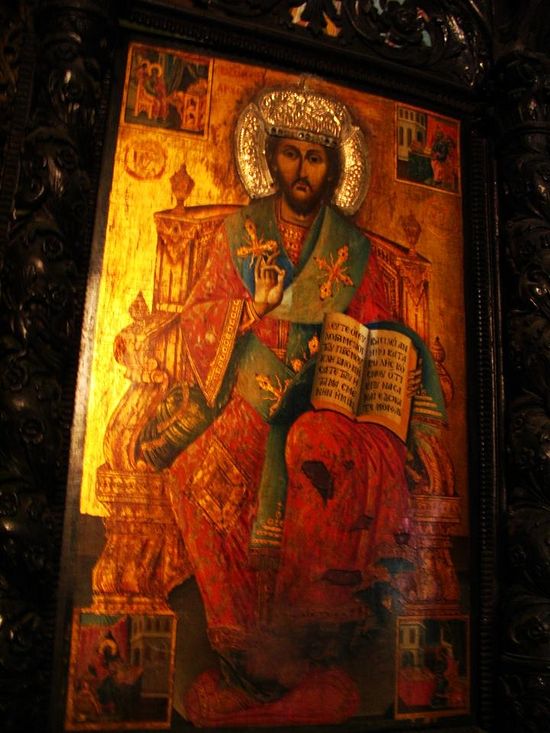 Another icon on the wooden screen. 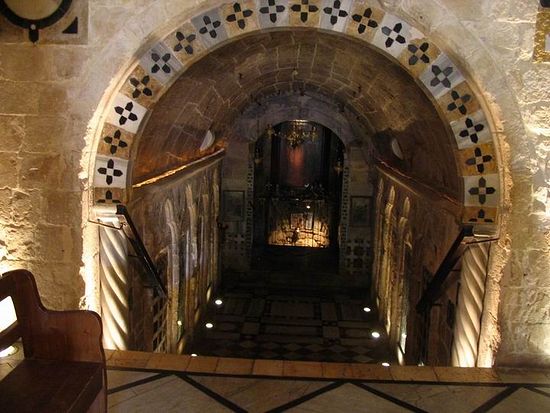 In the ground level, at the edge of the hallway, there is a gentle flow of water. This spring is believed by the Greek Orthodox to be Mary's Spring, the site of the Annunciation. 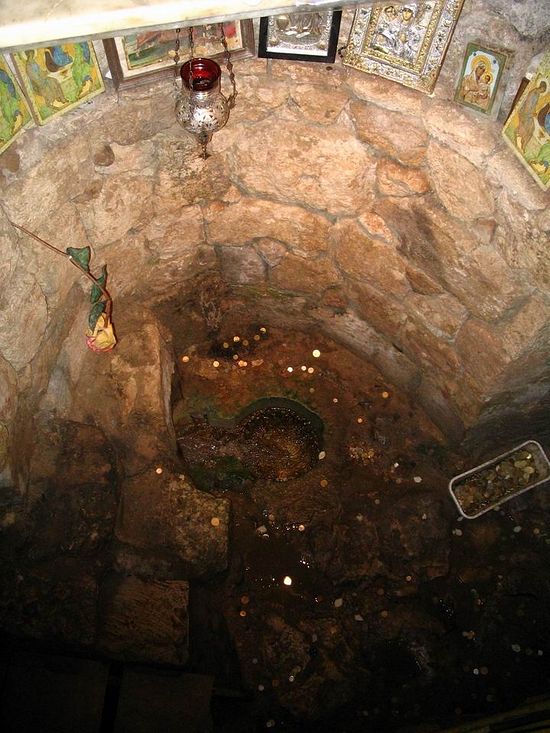 A detail of Mary's spring. The waters flow outside via pipes to the trough known as Mary's well. 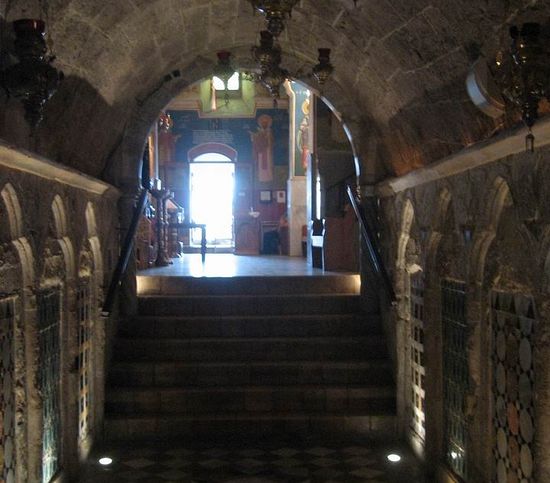 The photo shows a view from the spring towards the entrance to the church. Ancient Palestinian monastery under UNESCO consideration
At the foot of a mountain in Bethlehem's Kidron Valley lies the Holy Lavra of Saint Sabbas the Sanctified, also known as Mar Saba Monastery, the most famous monastery in Palestine. Built 1,500 years ago by Mar Saba and 5,000 other monks, it has recently been nominated for inclusion in UNESCO's World Heritage Sites.

“Russian candle” begins to shine above Jerusalem
Reconstruction of the bell tower of the Russian Holy Ascension Convent in Jerusalem situated on the very summit of the Mountain of Olives (Mount Olivet) has been completed.

Ever wanted to visit the Holy Land? Report says 2013 Christians Tourism highest ever!
The inevitable questions that get asked about travelling to Israel are issues of safety, security and travel. Some myths need to be dispelled.
Comments

Bogusłw R. Zagórski10/23/2021 6:57 pm
Gentlemen, it is not a comment, but a question. Can you kindly give me the formal name of the Church in Arabic language and letters? Thank you for your attention and kindness. Best regards - Bogusław R. Zagórski

Julieta Benefield2/10/2019 4:03 am
I visited the Church of the Archangel Gabriel in July 2018. I love the paintings/photos and history. I have a question, are visitors allowed to go downstairs and pitch water directly form the Spring?
I bought small bottles at the store located next tot he Church and filled the bottles with water - the water was from a large container. I was hoping to fill the bottles directly flowing from the Spring.
The Gift Shop/Store next to the Church carries oils and souvenirs. I bought 5 large bottles of Oil: 2 bottle of Nard, 2 bottle of Jasmine and one bottle of Rose of Sharon. I love my Oils.
Does the store have a website?
×