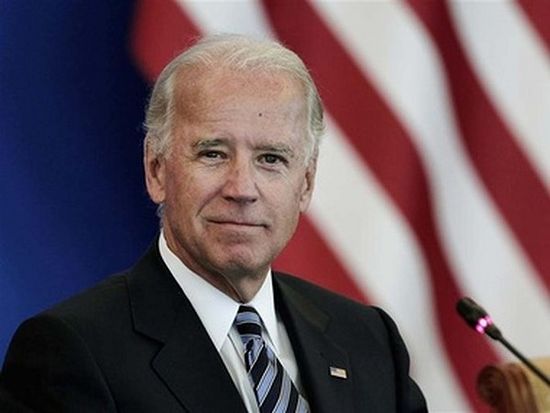 Biden performed the ceremony at 4 p.m. yesterday inside the vice president’s residence, located at the U.S. Naval Observatory.

Biden reportedly obtained a license from the District of Columbia before officiating the service for Brian Mosteller, the director of Oval Office operations, and Joe Mahshie, a trip coordinator for Michelle Obama.

He then tweeted out a picture of the two men holding hands as he looked on approvingly. 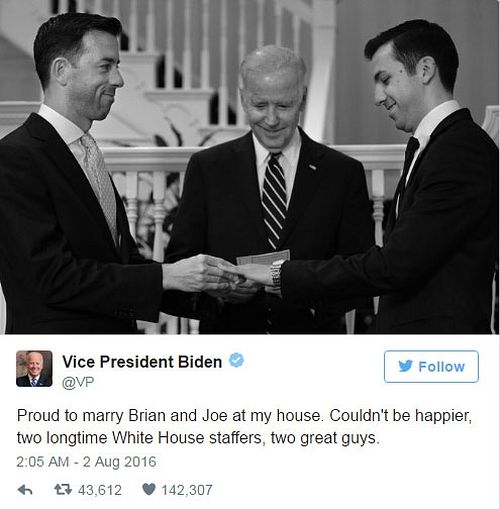 Biden announced his support for redefining marriage in May 2012, before Barack Obama officially changed his position on the issue, adding that the TV show “Will and Grace” had done “more to educate the American public” about homosexuality than anything else.

“The situation involving Vice President Biden and his marrying of two homosexuals gives further evidence of the decay that is occurring within the Catholic Church in America,” Judie Brown of the American Life League told LifeSiteNews. “Had the bishops, years ago, enforced church law and made it clear to Mr. Biden, among others, that public defiance of church teaching would result in denial of the reception of Holy Eucharist until such time as the Catholic in question repents of his sins of defiance, we would not today be hearing of outrages such as that exhibited by Biden.”

James A. Smith Sr., vice president of communications at the National Religious Broadcasters, likened Biden’s views on marriage to his stance on abortion:

Brown remains hopeful the Catholic Church will rein in dissident politicians who flagrantly violate the faith.

“Where is his bishop?” Brown asked. Judge says Alabama must perform gay ‘marriages’
Fr. Mark Hodges
Judge Granade’s injunction is permanent, preventing judges and any official "who would seek to enforce the marriage laws of Alabama that prohibit or fail to recognize same-sex marriage” from doing so. Uncivil war hits the U.S. South over religious freedom
“I think the attorney general is a national embarrassment, quite frankly,” Staver told WND on Jan. 31. “Does Mr. Cooper really, honestly, want to open up women’s public bathrooms and showers to men and put the privacy of women and young girls at risk? Is that really what he wants?” Mississippi’s Senate just approved a sweeping ‘religious liberty’ bill that critics say is the worst yet for LGBT rights
The passage of the bill comes days after Georgia Gov. Nathan Deal vetoed a similar measure that had provoked outrage from Hollywood, the National Football League and a number of big businesses. North Carolina, meanwhile, is dealing with backlash to a recently-passed law that bars local governments from extending civil rights protections to gay and transgender people and prohibits transgender people from using public bathrooms according to their gender identity. Another Baker Under Gay Agenda Threat for Refusing to Bake Wedding Cake
Edie and David Delorme own the Kern's Bake Shop in Longview, Texas — known around town for their petit fours and sugar cookies — and also their custom-made wedding cakes.

825,000 Signatures Collected for the Traditional Family
In order to emphasize the importance of family in the society, the initiators of this project aim to collect a higher number of signatures than required by law. We mention that 500,000 of valid signatures from citizens eligible to vote are required according to the Romanian law to be collected in order to initiate a revision of the Constitution.
Comments

Z!9/21/2020 6:29 am
I speak for millions of Orthodox Christians deeply embarrassed by Joe Biden types - Homosexuality is a serious abomination, a monumental sin, Amartia! St John Chrysostom denounces homosexual behavior as truly a demonic and rebellious act against God’s Plan; it’s outside of God’s Order. What’s most despicable is in the church, there’s wolves in sheep’s clothing pretending to be priests, bishops, metropolitans who are closeted practicing homosexuals. No wonder millions among the Faithful are walking out
×