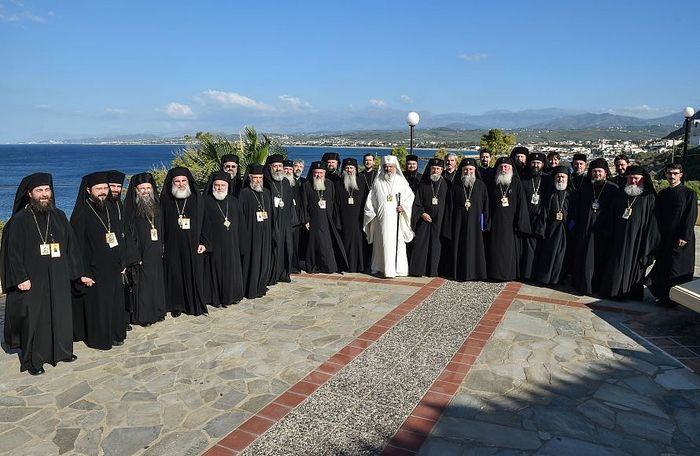 The website cuvantul-ortodox.ro has recently published the translation of a letter signed by His Eminence Hierotheos Vlachos, Metropolitan of Nafpaktos and Agios Vlasios, on the position and performance of the delegation of the Romanian Orthodox Church at the Holy and Great Council of Crete.

We render below the text of the letter (see here the original text in Greek):

“As member of the Delegation of the Church of Greece I attended very attentively all the sessions of the Holy and Great Council recently held at Kolymbari, Crete.

I wrote and I will write again about my remarks and impressions on the Council’s sessions. Here, I only want to point out the important role the Patriarch of Romania, Daniel, played at the Council, and the Romanian Patriarchate, in general.

During the sessions, it was the Patriarch of Romania who sustained his opinions with good theological command, experience from the (ecumenical) Dialogues, and determination. In certain cases he was very persistent and made an important contribution to the formulation of article 21 of the document entitled “Relations of the Orthodox Church with the Rest of the Christian World”. He repeatedly said that he would not sign the text unless certain corrections were done. He has also expressed, many times, his opinion not to finish the discussions and that this text should not be signed, but remain open for the following Holy and Great Council. In one case, he did strongly express his dissatisfaction and said he felt the participants acted under constrain.

When the text was finalized and read in plenary, the Patriarch of Romania noticed that it was not correctly translated into French and that his remarks had not been introduced. Then he said that he would not sign the text unless the corrections were made. This stopped the entire process in order to correct the text again.That was done after a long time.

Out of all the primates present, the Patriarch of Romania, Daniel, showed he had the best theological command and capacity to sustain his opinions. He also had the capacity to make alternate proposals when his proposals were not accepted.

Yet, the Regulations stipulated that, in case the proposal of a certain Church was not accepted by the other Churches, the text had to remain as it was, so that not all the proposals were accepted. In general, the Patriarch of Romania impressed all the members of the Council with his theological knowledge and how he approached the themes to be discussed.

The Metropolitan of Moldova, Teofan, also made important remarks and spoke in an Orthodox religious spirit, based on the teaching of the Church.

I think that the Church of Romania impressed all with its presence. When the Council’s records are published, this will be fully confirmed.