What does the Transfiguration of the Lord teach us?

On August 13/26 the holy Orthodox Church celebrates both the Leavetaking of the Feast of the Transfiguration of the Lord and the great Russian bishop St. Tikhon of Zadonsk. Thus we offer today a homily of the great hierarch on the great feast. 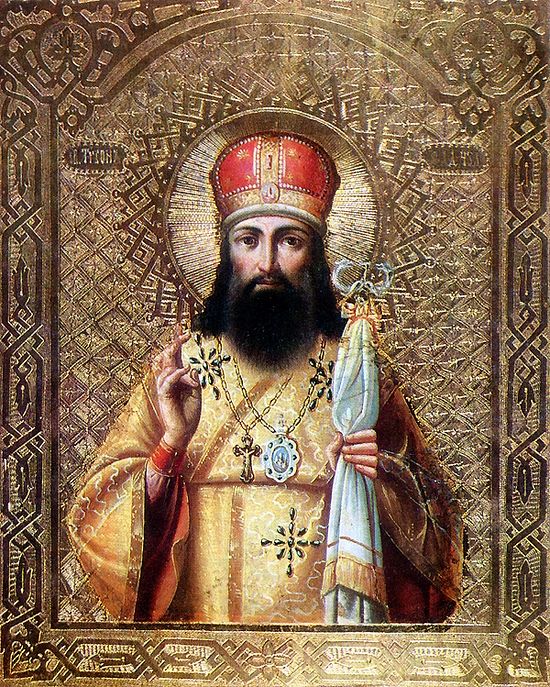 You ask that I would tell you about the saving actions of our Savior Jesus. Alright … It will be good for us to study this. We are pilgrims, our homeland is not on earth; the earth, as a journey, we pass through, and all things earthly we abandon on earth, and with oneness of soul we depart from here. For this sake and about this we dream and take care that our soul is healthy, and with it we permanently depart, and into our homeland enter.

Our Savior, having told the apostles that He must suffer and die in Jerusalem for our salvation, some time before His suffering took with Him three apostles—Peter, James, and John—and lead them upon a high mountain, where before them He was transfigured: and His face was illumined as the sun, His garments were white as light, and there appeared to them in glory the two prophets Moses and Elijah with the Lord conversing. Then they heard a voice from the cloud of light overshadowing them: This is My beloved Son, in whom I am well pleased; hear ye Him (Mt. 17:2-5). The apostles, hearing this voice, fell upon their faces, and were exceedingly afeared.

Firstly, the Lord revealed to the apostles by this saving action that He is the radiance of the Father, God and Lord, and King of glory, although concealed in the humble image of man: visibly He is as a Man, like unto any other, but inwardly He is God. The apostles had earlier seen His glory in miraculous deeds, but here they saw His glory with their own eyes, when His face was revealed to them as the sun, and His garments … as light, as they bear witness: and we beheld His glory, the glory as of the Only-Begotten of the Father (Jn. 1:14). The glory of Christ was shown by His works, which no one but God could do. But here His Divine glory visibly appeared when His Divine face was illuminated as the sun, and His garments shone as light, and to which the voice of the Father testified.

Secondly, He showed that He goes of His own will to the suffering of which He foretold. Having understood that He is God, for Whom all things are possible, it is easy to comprehend that His suffering is voluntary. For who can persuade God to suffering, God Who is over all, and Whose word the waves all obey? His indivisible love and grace for us poor ones roused Him to it. He thereby exhorted the apostles that they, having seen their Lord and Teacher suffering, not be tempted, and not be afraid, and not lag behind Him, knowing that He was willing to suffer, and any kind of suffering. He was able to cease all evil actions of His enemies but did not want to, for He wanted to suffer through and endure everything that fallen man might be saved.

Thirdly, the apostles, as they saw the Savior in glory, so saw they the prophets having appeared, communicating in that glory. From this it is clear that in eternal life the glory of the saints will be like unto the glory of Christ: they will be like unto Him … and see Him as He is (1 Jn. 3:2). Here shone the face of Christ like the sun; then shall the righteous shine forth as the sun in the kingdom of their Father (Mt. 13:43), and He shall change our vile body, that it may be fashioned like unto his glorious body(Phil. 3:21).

We also see what joy and sweetness there will be there. Peter felt such joy and sweetness within himself, having seen the glory of God, that he did not want to descend from the mountain, but wanted to remain there: Then answered Peter, and said unto Jesus, Lord, it is good for us to be here (Mt. 17:4). It was but a part of the glory of God, as much as they were able to see, that they saw, but into such joy and sweetness they entered; what joy and gladness will be there, where the holy glory of God will be manifest, where we will see God face to face! (cf. 1 Cor. 13:12). But he who wants joy and to be a partaker of this glory must have tribulations and to unite his reproaches here to Christ. With Him (Christ) we suffer, and with Him we will be glorified (Rm. 8:17), and we must through much tribulation enter into the kingdom of God (Acts 14:22). You see that not simply through tribulation, but through much tribulation must we enter therein.

Fourth, this voice of the Father: This is My beloved Son, in whom I am well pleased; hear ye Him—concerns not only the apostles, but all of us. Then God proclaimed from the cloud to the apostles, but through them this voice comes to us; to us God speaks: This is My beloved Son, in whom I am well pleased; hear ye Him! As many times as we read or hear His holy Gospel, so many times we hear the voice of the Son of God speaking to us, Who teaches us of nothing else but the path to salvation, which all who want to receive it must tread to the glory of God, revealed in part on the mountain. And he who hearkens to the word of God does not hearken to man, but to God Himself; and he who does not hear the word of God and does not live according to the word of God, the same man God, Who speaks through His Word, does not hear. Let us listen to the Son of God, as the Heavenly Father exhorts us, and having laid aside all earthly cares, may every one take up his cross which will be given by Him, and follow after Him that He may guide us to His Heavenly Father; as we go so will we comprehend; may we suffer with Him, yes and with Him be glorified; not being ashamed to bear His reproach, and He will not be ashamed of us when we He comes in His glory. Remember us O Lord in Thy Kingdom! In Memory of St. Tikhon of Zadonsk: "He Who Does These Things and Teaches Them Shall Be Called Great in the Kingdom of Heaven"
Archbishop Mark of Philadelphia and Eastern Pennsylvania
"So brothers and sisters, let us listen to the holy Gospel, and look at St. Tikhon of Zadonsk and all the saints. I was searching in my heart and wondering if is there any saint we simply recognize for their teaching, because as we listen to the Gospel today, those who teach and do not do shall be called least in the Kingdom of Heaven, but those who do and teach, the doing before the teaching, and actually the doing is teaching—St. Paul talks about being living epistles—shall be called great in the Kingdom of Heaven." To Bring All Things to the Knowledge of the Truth: A Homily on the Feast of the Transfiguration
Fr. Christopher Rocknage

Prayer on the feast of the Transfiguration
Archimandrite Iachint Unciuleac
Come to us again, O Jesus—do not listen to Peter! Come down from Tabor and come to our homes, into our hearts! Come here, where we are suffering and laboring for our daily bread! Come here, where we are crucified by people, demons, and passions! If Peter does not want to come down, leave him on the mount and come to us, to our hearts!
Comments
×