In Memory of St. Tikhon of Zadonsk: "He Who Does These Things and Teaches Them Shall Be Called Great in the Kingdom of Heaven" 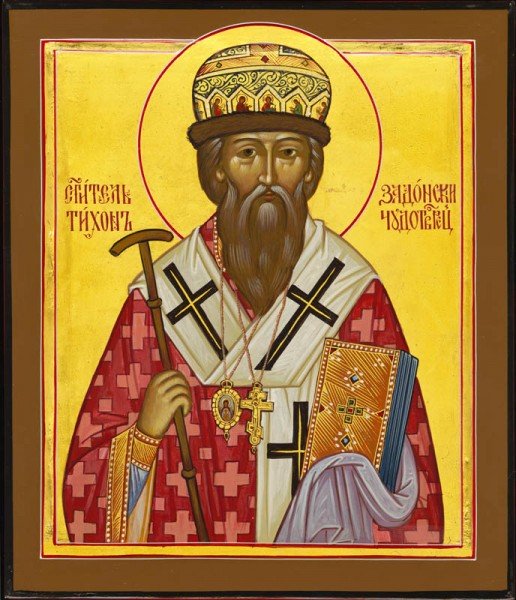 In the name of the Father and of the Son and of the Holy Spirit, three Persons, one God. Amen.

As we celebrate this glorious feast of the monastery, and as we remember St. Tikhon of Zadonsk who brought us together, we heard the Epistle and the Gospel. This section of the Gospel is from the Sermon on the Mount and it ends with the words, that he who does these things and teaches them shall be called great in the Kingdom of Heaven, but who does not do them and teaches them shall be called the least in the Kingdom. As we look at the life of St. Tikhon, he was not only known for his teaching and his writings, and teaching at the seminary and establishing seminaries, but as a person who lived what he preached. It was a part of who he was.

And I think of the many years that I studied the Scriptures, the fathers, the writings, and before I became Orthodox the Greek and the Hebrew, and Church history, and so on and so forth—it doesn’t amount to anything unless we put it into practice. And I can remember going to a church before I was Orthodox, and I was struggling in my own journey because I had studied all of this at seminary and still knew that I was lost. 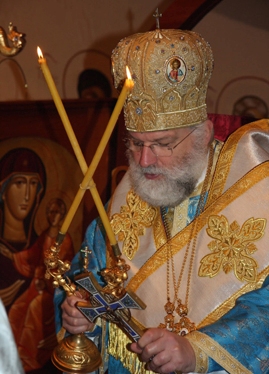 The Most Reverend Mark
And there was this little old lady who went up for confession. She was probably 85 and she was hard of hearing so her confession was rather loud and everybody in the church could hear. And she was weeping. She was pouring out her heart before the priest about a relationship she had. And as I sat there, not trying to listen, but I could hear and I saw the humility. And this woman probably could not explain one line from the Creed. She would make comments such as “when the Theotokos went to church she went to the Orthodox Church.” But I looked and I saw that she had something I didn’t have, because I had my theology on my shelf—she had her theology in her heart. It was a part of who she was. And even though she may not have been able to give an exposition of the Orthodox faith, even though she may not have been able to explain the Creed in obedience to the Church’s teaching, she knew that she needed the Church, she needed the discipline of the Church for her salvation, and she came to participate in that.

So brothers and sisters, let us listen to the holy Gospel, and look at St. Tikhon of Zadonsk and all the saints. I was searching in my heart and wondering if is there any saint we simply recognize for their teaching, because as we listen to the Gospel today, those who teach and do not do shall be called least in the Kingdom of Heaven, but those who do and teach, the doing before the teaching, and actually the doing is teaching—St. Paul talks about being living epistles—shall be called great in the Kingdom of Heaven.

St. John Chrysostom, in one of his homilies pertaining to the Sermon on the Mount, in this particular passage, says if we teach and do not do, people will laugh us to scorn, because if it’s such wonderful theology, such wonderful teaching, then why don’t we practice it ourselves? And I can tell you, having worked in mental health, having been a priest, having been a bishop—I’m probably not telling you anything new—it’s always easier to give advice and know what another person should be doing than to do it ourselves. But as we accept the salvation that God earnestly desires us to have, let’s follow the examples of the saints that have gone before us, like St. Tikhon of Zadonsk—that we not only teach the faith by our words, but we teach by our actions. And let us make sure we make every attempt to teach by our actions before our words.

Let us offer the holy oblation in peace. St. Tikhon of Zadonsk Monastery Celebrates Its Patronal Feast
On August 12-13 the monastery of St. Tikhon of Zadonsk in Waymart, PA celebrated its patronal feast with a festal Vigil and Divine Liturgy. Abbot Sergius (Bowyer) and the monastery brotherhood were joined in the celebration by His Eminence Archbishop Mark of Philadelphia and Eastern Pennsylvania who presided at the Divine Liturgy, dean of St. Tikhon’s Seminary Fr. Stephen Voytovich, as well as a dozen area priests and other visiting clergy, many of whom had been students of St. Tikhon’s Seminary and were trained and nourished in the monastery church.