Temperature of Holy Fire around 40°C in first few minutes 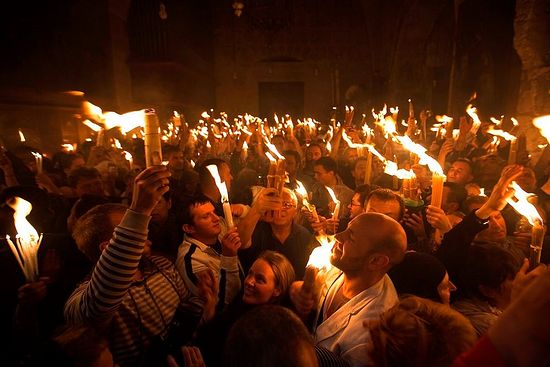 The temperature of the Holy Fire is around forty degrees Celsius for several minutes after its descent, so believers can freely take it in their hands and “wash” their faces in it during this time because it does not burn, Archpriest Gennady Zaridze, Chairman of the Association of Orthodox Christian Scientists and rector of the Church of the Protecting Veil of the Mother of God in the Voronezh region, said in his interview with RIA-Novosti.

“I used a pyrometer and it registered the temperature of the Holy Fire right after its descent: at once I ‘washed’ my face with this Fire (and it did not burn!) and measured its temperature. And it turned out that the average temperature of the Fire that I was holding and the Fire being held by my neighbors was forty-two degrees Celsius. Fifteen minutes later I measured the temperature again and it had reached 320° Celsius by that time,” the archpriest who has been researching miracles using natural-scientific methods for many years related.

Fr. Gennady Zaridze visited the Holy Land in April 2016 for Pascha at the invitation of the St. Andrew Foundation and with the blessing of Metropolitan Sergy of Voronezh and Liski.

“I don’t have the slightest doubt that the Holy Fire is a work of the grace of God. It is a sort of divine mercy on the sinful world designed for preserving and strengthening faith,” the pastor noted in his interview with RIA-Novosti. He added that there were cases of healing miracles during the Holy Fire’s descents.

The archpriest stated that back in 2008 Andrei Volkov, a scientist from Russia’s National Research Center (Kurchatov Institute), had come to Jerusalem before the descent of the Holy Fire. He brought an instrument with him which registered various spectra of electromagnetic radiation. On that day he was the first person (even before the patriarch went out to the faithful with the Fire) to learn that the Holy Fire had descended because his instruments showed a very strong electrical discharge. LIGHTING BEHAVIOUR OUT OF THIS WORLD, NO MANMADE LIGHTING EXIST
https://youtu.be/j_gvLmDpsYk

Nick Grigoropoulos9/4/2016 2:02 pm
As a skeptical person I always consider all the other possibilities before concluding a miracle. However when I first laid eyes on the Holy Fire I knew from that very instant that this is real. I had no need for further examination or proof, my soul knew it immediately, there was a spiritual connection. Therefor I do understand skeptics and taking measurements and all but what I fail to understand is common sense and their spiritual discernment. I have read few articles claiming it to be a hoax but theses articles sound deliberate and an attempt by wicked people to discredit the obvious Truth. The resurrection of Jesus Christ is real and don't let anyone steal that from you. Jesus is the real Messiah but only a few realize and have opened their hearts to notice and believe.
×