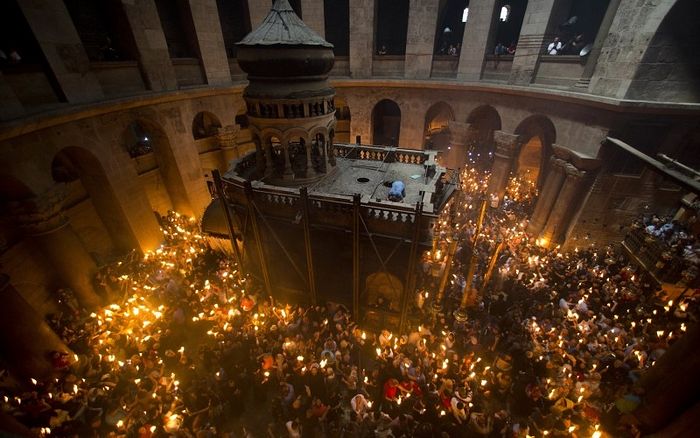 According to tradition, the Holy Fire ignites from the tomb of Jesus Christ at the Church of the Holy Sepulchre in Jerusalem. It has been descending on the church for more than 1,500 years and it is believed that the year when it fails to light will be the last year in humankind’s history.

In those first few moments after it descends, the fire is only slightly warm. Pilgrims can easily take it in their hands and wash their faces in it, without hurting either their hands or faces.

Is this miracle? Some people, especially non-Orthodox Christians, have their doubts. But there was no doubt in the minds of the 100-plus pilgrims from Russia that they were witnessing a miracle: that was what had brought them to Jerusalem two days previously, on Friday. In total, thousands of Christians gathered in Jerusalem to light torches and candles from the holy flame on the eve of Orthodox Easter. 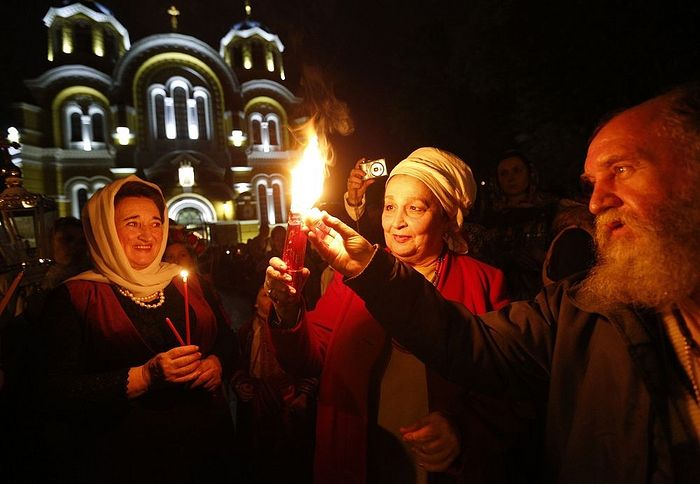 
Orthodox priest Fr Gennady Zaridze from the Russian city of Voronezh was among them. He was there to receive God’s grace transmitted, as he believes, by the Holy Fire. But he was also there as a member of the union of Orthodox scientists to conduct an experiment: he measured the temperature of the Holy Fire with a very accurate device that uses lasers.

I was near him during the experiment and had the chance to see it for myself, close up. As a Catholic, I admit I was sceptical. But the results were surprising. The temperature immediately after we received the fire from the Patriarch of Jerusalem and All Palestine (around 2:34 pm Jerusalem time on Saturday, April 30) was 42°C, but 15 minutes later, at 2:49 pm, it was 320°C.

For Fr Gennady, these results offer a clear scientific argument for the existence of Divine energy in the flame, emanating from God.

A delegation from the St Andrew foundation, led by Vladimir Yakunin, took the Holy Fire from Jerusalem to Moscow, for the Easter service at the Christ the Saviour Cathedral.

The flame’s journey encompasses dozens of Russian cities, as it will share its light, the light of God’s grace, with believers across the country – from Sevastopol to Yakutsk, in addition to other Orthodox churches abroad. Holy Fire has descended in Church of Holy Sepulchre in Jerusalem
At the ceremony in the church was present, in particular, the delegation of the St. Andrew the First-Called Foundation, which, closer to midnight, will deliver the fire to the patriarchal Paschal service in the Church of Christ the Savior in Moscow. The fire will also be sent to dozens of Russian regions and countries both near and far.

(Photos) Orthodox Christians Prepare for Holy Fire Ritual in Jerusalem This Saturday
Known as the Miracle of the Holy Fire, believers contend that a fire is mysteriously lit in the exact spot where Jesus was entombed over two thousand years ago.
Comments