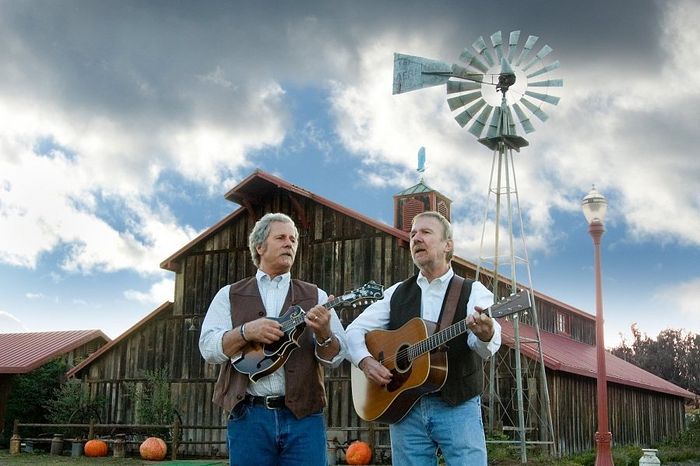 Like many Americans, Chris Hillman can tell you exactly where he was when some of the most tragic moments in the nation's history unfolded.

The Southern Californian singer/guitarist/bassist/mandolin player was just 18 when President John F. Kennedy was gunned down in Dallas, and despite the shock rippling through the country, he and his bluegrass band played their scheduled gig that night before an audience of one. Five years later, Hillman, by then a founding member of the Byrds, had just played a benefit for Robert F. Kennedy's presidential campaign when news came of his assassination in Los Angeles.

All those tragedies were dwarfed, however, by 9/11. Hillman watched the terror attacks in New York City, Washington, D.C., and the skies above Pennsylvania on Sept. 11, 2001, play out in horrific real time on television. He had gone to the gym that morning, but when the first plane hit the World Trade Center, he turned around, went home, and watched with the rest of the world.

"It was devastating," says Hillman. "9/11 was almost such a shock, it's hard to believe that it happened. But it did happen, and here we are today in this quagmire. But we keep moving, keep persevering, keep going."

For Hillman, that means rebuilding. On Sunday, just a week before the 15th anniversary of 9/11, Hillman will join longtime musical partner Herb Pedersen and his own Agape Trio at a benefit in Memphis for one of the lesser-known casualties of the World Trade Center attacks.

For members of the Greek Orthodox faith, the devastating losses of that day were compounded by the annihilation of St. Nicholas Greek Orthodox Church. The historic house of worship stood across the street from the World Trade Center and was crushed when the center's south tower collapsed. It was the only building not part of the World Trade Center complex to be destroyed in the attacks that day.

"(St. Nicholas') was close to Ellis Island where immigrants would disembark to New York City," says Father Simon Thomas of Memphis' Annunciation Greek Orthodox Church. The 107-year-old Annunciation, best known for its annual Greek festival, is hosting the benefit at Malco's Paradiso movie theater, which is owned by the Tashie family, who are members of the church. "Immigrants would come off, and one of the first things they would do is go to St. Nicholas' and light a candle to give thanks for the safe passage."

Now, 15 years after it was felled, St. Nicholas' is coming back. Last year, the congregation, which celebrates its centennial anniversary this year, began construction on the St. Nicholas National Shrine at the World Trade Center across the street from the church's original location. (The old parcel was taken to build a vehicle security center for the 9/11 Tribute Center and surrounding memorials.) The shrine will be both a working church and a nondenominational bereavement center. Built with Greek marble that came from the same vein used to build the Parthenon, the shrine will have a striking design that will glow at night. It is expected to be complete by next year at a cost of $50 million, including a $15 million endowment to finance its operations.

To help fund the project, Hillman, who followed his wife into the Greek Orthodox church 20 years ago, has been playing a series of benefit concerts around the country.

"It's a very personal cause for me," says Hillman. "Whenever I can do one of these, that's my way of contributing."

Hillman's faith is a little-known side to one of the most celebrated careers in American music. Raised outside of San Diego, Hillman fell in love with the mandolin as a teen and was soon a major player on the region's bluegrass scene where he first encountered fellow Pedersen in 1963.

"Herb and I both had an advantage in that we were both at a very young age … able to play with acts like the Golden State Boys (later known as the Hillmen), made up of guys from the Southeast who knew the music first hand," says Hillman.

In 1964, Hillman was tapped to play bass in a new band called the Byrds. The group was a smash right out of the gate thanks to its first single, a rock cover of Bob Dylan's "Mr. Tambourine Man." Over the next four years, the band, which also included Roger McGuinn, Gene Clark and David Crosby, was one of the top acts in rock with hits like "Turn, Turn, Turn" and "Eight Miles High" and their 1968 album "Sweetheart of the Rodeo" pioneered country rock.

Hillman left the Byrds shortly after but continued his remarkable run with stints in such influential bands as the Flying Burrito Brothers with "Sweetheart" bandmate Gram Parsons and Manassas with Stephen Stills. In the '80s, he fronted the Desert Rose Band, an all-star outfit featuring Pedersen that enjoyed a string of hits on the country charts. Since then, Hillman, who is in the planning stages of a new album, has bounced among a series of group and solo projects often with Pedersen by his side.

"We're very much alike," Hillman says. "Both Californians raised in a similar way. I'm from Southern California; he's from Northern. He's a just great guy. He's like a brother that you like."

Father Thomas, who is bringing Hillman to Memphis for the benefit, was the musician's priest in Santa Barbara, California, for nine years before moving to Memphis last year.

"Chris is a really down-to-earth person despite the things he's been involved with in his life," says Father Thomas. "I remember once I was blessing his house, so we sprinkle holy water around all the rooms of his house, and I open the door to his office, and there are all these awards and certificates. There's the gold record for 'Turn, Turn, Turn.' It's very intimidating, but you would never get that from Chris. He knows he's been blessed, but he gives his blessings back."

With Chris Hillman and Herb Pedersen and the Agape Trio. Ground Zero’s Priest, Fr. John Romas Passes Away at 86
Rev. John D. Romas, who experienced the complete and total destruction of his home parish of St. Nicholas Greek Orthodox Church in New York City passed away on January 24th and was buried at a special service celebrated by Archbishop Demetrios, head of the Greek Orthodox Archdiocese of America. I like the Christian life: Chris Hillman talks about his faith
This is the coolest thing I’ve seen all day.
Comments

Carl9/2/2016 4:56 pm
A "non-denominational bereavement center" - what? 50 million dollars??? That's an absurd amount of money. Why not just spend a few million and rebuild the humble Church that stood there prior to 2001?

I just read this article (http://www.pravoslavie.ru/english/96682.htm) about how the nuns of the Nativity of the Theotokos monastery are desperate to raise just $315,000 so they can repair their moldy buildings - "let's not leave them homeless" it says. Sounds to me like they could use some of that 50 million.
×