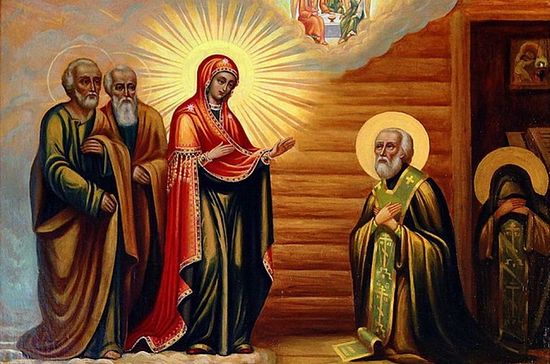 Once, in the deep of night, Venerable Sergius was reading an Akathist to the Mother of God. Having completed the usual rule he sat a bit to rest when suddenly he said to his cell attendant Venerable Micah: “Watch, child, we will have a miraculous visitation.”

Barely had he uttered these words when a voice was heard: “The All-Pure is coming.” St. Sergius hastened from his cell to the hall when suddenly there shone a bright light, stronger than the sun. He saw shining in ineffable glory the Mother of God, accompanied by the Apostles Peter and John. Unable to endure the wondrous light, Venerable Sergius reverently bowed before the Mother God and she said to him: “Fear not, my chosen one! I have come to visit you. Do not grieve anymore over your disciples and this place. Your prayers have been heard. From henceforth your habitation will be abundant, and not only in the days of your life, but also after your departure to the Lord I will never abandon your habitation, inexhaustibly granting it everything it needs and protecting it from all necessity.”

Having said this, the Mother of God became invisible. St. Sergius was long in inexpressible rapture, and, having come to himself, he picked up the venerable Micah. “Tell me, father,” asked the attendant, “what was this miraculous vision about? My soul nearly departed from my body from fear!” But the venerable Sergius remained silent. Only his luminescent face spoke of this spiritual joy which the saint experienced. “Wait a bit,” he finally uttered to his disciple, “while your soul calms from this miraculous vision.” After a while St. Sergius beckoned two of his disciples, Venerable Isaac and Simon, and disclosed to them the common joy and hope. All together they served a Moleben to the Mother of God. St. Sergius continued the remainder of the night without sleep, mentally paying heed to the Divine vision.

[1] Where many relics are housed in the Trinity-St. Sergius Lavra. A Miracle of Knowledge: St. Sergius of Radonezh
The venerable monk, when he had ended his prayers, glanced at the boy and, conscious that he beheld the chosen vessel of the Holy Spirit, he called him to his side, blessed him, bestowed on him a kiss in the name of Christ, and asked: "What art thou seeking, or what dost thou want, child?" The boy answered, "My soul desires above all things to understand the Holy Scriptures. I have to study reading and writing, and I am sorely vexed that I cannot learn these things. Will you, holy Father, pray to God for me, that he will give me understanding of book-learning?" The monk raised his hands and his eyes toward heaven, sighed, prayed to God, then said, "Amen."
Comments
×