The boy Bartholemew was a slow learner. But he had faith in God, and prayed for help. He would later become a great saint of the Church, the "Abbot of Russia," and his parents would also become saints. Here is how the boy received the miraculous gift of knowledge and learning, through the grace of God. 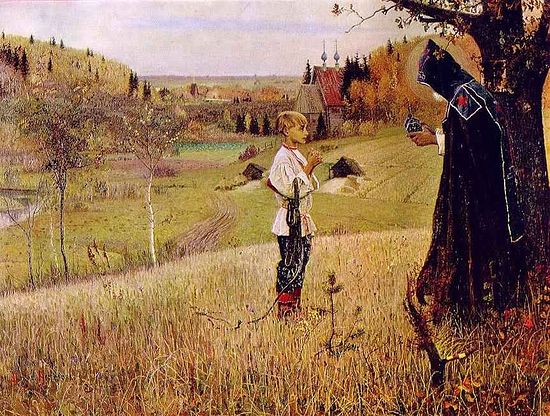 Vision of Young Bartholemew. A painting by Mikhail Vasilievich Nesterov (1862-1942).

Our holy Father Sergius was born of noble, Orthodox, devout parents. His father was named Cyril and his mother Mary. They found favour with God; they were honourable in the sight of God and man, and abounded in those virtues which are well-pleasing unto God. Cyril had three sons, Stephen, Bartholomew, and Peter, whom he brought up in strict piety and purity.

Stephen and Peter quickly learned to read and write, but the second boy did not so easily learn to write, and worked slowly and inattentively; his master taught him with care, but the boy could not put his mind to his studies, nor understand, nor do the same as his companions who were studying with him. As a result he suffered from the many reproaches of his parents, and still more from the punishments of his teacher and the ridicule of his companions. The boy often prayed to God in secret and with many tears: "O Lord, give me understanding of this learning. Teach me, Lord, enlighten and instruct me." His reverence for God prompted him to pray that he might receive knowledge from God and not from men.

One day his father sent him to seek for a lost foal. On his way he met a monk, a venerable elder, a stranger, a priest, with the appearance of an angel. This stranger was standing beneath an oak tree, praying devoutly and with much shedding of tears. The boy, seeing him, humbly made a low obeisance, and awaited the end of his prayers.

The venerable monk, when he had ended his prayers, glanced at the boy and, conscious that he beheld the chosen vessel of the Holy Spirit, he called him to his side, blessed him, bestowed on him a kiss in the name of Christ, and asked: "What art thou seeking, or what dost thou want, child?" The boy answered, "My soul desires above all things to understand the Holy Scriptures. I have to study reading and writing, and I am sorely vexed that I cannot learn these things. Will you, holy Father, pray to God for me, that he will give me understanding of book-learning?" The monk raised his hands and his eyes toward heaven, sighed, prayed to God, then said, "Amen."

Taking out from his satchel, as it were some treasure, with three fingers, he handed to the boy what appeared to be a little bit of white wheat prosphora, saying to him: "Take this in thy mouth, child, and eat; this is given thee as a sign of God's grace and for the understanding of Holy Scriptures. Though the gift appears but small, the taste thereof is very sweet."

The boy opened his mouth and ate, tasting a sweetness as of honey, wherefore he said, "Is it not written, How sweet are thy words to my palate, more than honey to my lips, and my soul doth cherish them exceedingly?" The monk answered and said, "If thou believest, child, more than this will be revealed to thee; and do not vex thyself about reading and writing; thou wilt find that from this day forth the Lord will give thee learning above that of thy brothers and others of thine own age."

Having thus informed him of divine favour, the monk prepared to proceed on his way. But the boy flung himself, with his face to the ground, at the feet of the monk, and besought him to come and visit his parents, saying, "My parents dearly love persons such as you are, Father." The monk, astonished at his faith, accompanied him to his parents' house.

At the sight of the stranger, Cyril and Mary came out to meet him, and bowed low before him. The monk blessed them, and they offered him food, but before accepting any food, the monk went into the chapel, taking with him the boy whose consecration had been signified even before birth, and began a recitation of the Canonical Hours, telling the boy to read the Psalms. The boy said, "I do not know them, Father." The monk replied, "I told thee that from today the Lord would give thee knowledge in reading and writing; read the Word of God, nothing doubting." Whereupon, to the astonishment of all present, the boy, receiving the monk's blessing, began to recite in excellent rhythm; and from that hour he could read.

His parents and brothers praised God, and after accompanying the monk to the house, placed food before him. Having eaten, and bestowed a blessing on the parents, the monk was anxious to proceed on his way. But the parents pleaded, "Reverend Father, hurry not away, but stay and comfort us and calm our fears. Our humble son, whom you bless and praise, is to us an object of marvel. While he was yet in his mother's womb three times he uttered a cry in church during holy Liturgy. Wherefore we fear and doubt of what is to be, and what he is to do."

The holy monk, after considering and becoming aware of that which was to be, exclaimed, "O blessed pair, 0 worthy couple, giving birth to such a child! Why do you fear where there is no place for fear? Rather rejoice and be glad, for the boy will be great before God and man, thanks to his life of godliness." Having thus spoken the monk left, pronouncing an obscure saying that their son would serve the Holy Trinity and would lead many to an understanding of the divine precepts. They accompanied him to the doorway of their house, when he became of a sudden invisible. Perplexed, they wondered if he had been an angel, sent to give the boy knowledge of reading.

After the departure of the monk, it became evident that the boy could read any book, and was altogether changed; he was submissive in all things to his parents, striving to fulfill their wishes, and never disobedient. Applying himself solely to glorifying God, and rejoicing therein, he attended assiduously in Gods church, being present daily at Matins, at the Liturgy, at Vespers. He studied holy scripts, and at all times, in every way, he disciplined his body and preserved himself in purity of body and soul.

Taken from the Life of St. Sergius of Radonezh The 700th Anniversary of Sergius of Radonezh: 8.6 Million Russian Residents Visit the Lavra

The 700th Anniversary of Sergius of Radonezh: 8.6 Million Russian Residents Visit the Lavra
The founder of the monastery, St. Sergius of Radonezh, ranks as the second most frequently commemorated saint born in the land of Russia. Athlete of Virtues—St. Sergius of Radonezh
Commerated July 5/18; September 25/October 8
So remarkable is the life Of this wondrous Saint, so full of miracles, that we tend to overlook those points which, with prayer, can be applied to our own circumstances. Even his childhood gives a picture of an exemplary Christian life. How many contemporary mothers are so solicitous over the spiritual needs of their children even while they are still in the womb? How many of us turn first to God in time of need and teach our children to do likewise?
Comments