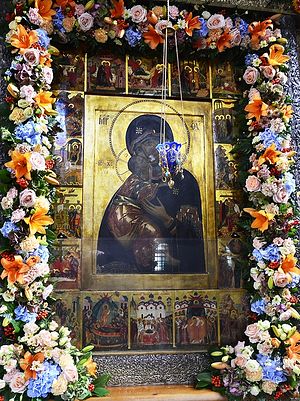 Moscow’s Sretensky Monastery celebrates its patronal feast on September 8—the Meeting of the Vladimir Icon of the Mother of God.

Nearly six centuries ago Moscow was saved from destruction at the hands of the ruthless invader Tamerlane, and the visible sign of this deliverance is the Vladimir Icon of the Mother of God.

In 1395 the numerous and battle-seasoned forces of Tamerlane approached the city. In their wake the invaders left burned villages, their inhabitants led away into captivity.

Moscow’s Grand Prince Vasily Dmitrievich sent to Vladimir for the miraculous icon. The people plaintively prayed before the image: “O Mother of God, save the Russian land.” According to tradition, the Mother of God appeared to Tamerlane in a vision, surrounded by innumerable hosts, and the Khan retreated from the walls of Moscow in fear.

Grateful for deliverance, on the place of the meeting of the icon the Russian people erected Sretensky Monastery, becoming one of the foremost holy sites of the capital.

Within two decades of the rebuilding of the monastery, its patronal feast became one of the most beloved of Muscovites. 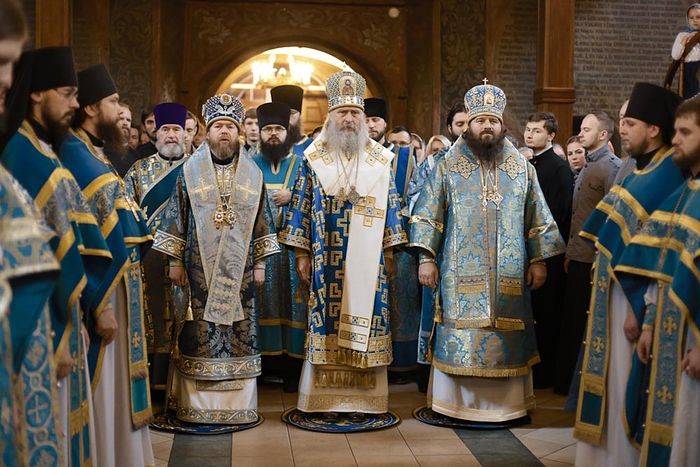 This year, as per tradition, the Divine Liturgy was celebrated in the cathedral of the Meeting of the Vladimir Icon of the Mother of God by Archbishop Theognost of Sergiev-Posad, Chairman of the Synodal Department of Monasteries and Monasticism, with Bishop Tikhon of Yegorievsk, abbot of the Sretensky Stavropegial Monastery and Executive Secretary of the Patriarchal Cultural Council, and Bishop Paramon, abbot of the Donskoy Stavropegial Monastery and Chairman of the Commission for the Coordination of Exhibition Activities of the Russian Orthodox Church, concelebrating, along with the brothers of Sretensky Monastery in holy orders and other of the capital's clergy. 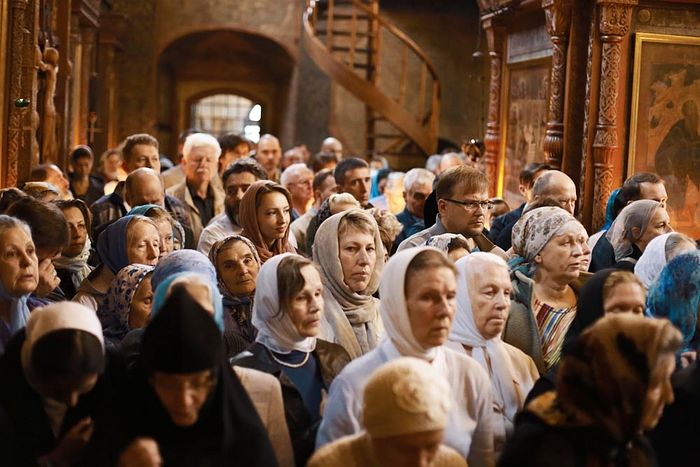 The service was sung by the Sretensky Monastery Choir under regent Nikon Zhila. 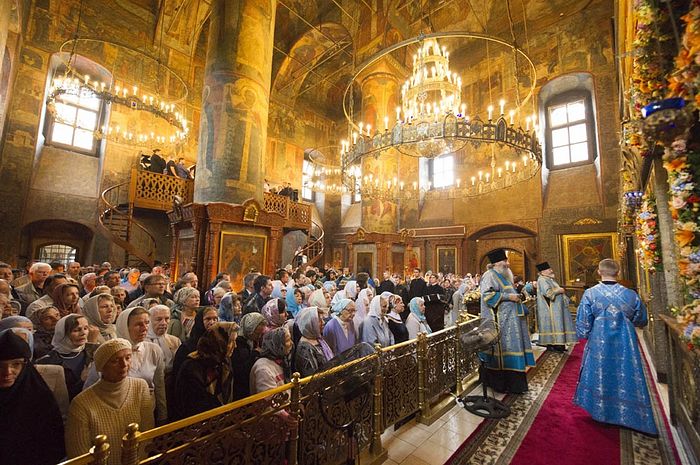 The joy of the festive service was shared by the brothers of the monastery, students and teachers of the Sretensky Spiritual Seminary, parishioners of the church, and numerous pilgrims.

Hieromonk Alexei (Godlevskii) gave a homily before the Communion of the Mysteries of Christ, reminding how by the prayers of the Most Pure Theotokos the miracle of the deliverance of the Russian land from imminent destruction was wrought.

At the end of the service Archbishop Theognost congratulated Abbot Bishop Tikhon, the brothers of the monastery and parishioners with the patronal feast on behalf of His Holiness Patriarch Kirill of Moscow and All Russia.

“There is a wonderful Russian proverb: ‘A man in captivity cannot pray to God,’ noted Vladyka. “Only good will makes a man’s prayer sincere and acceptable to God.” Recalling the words of Holy Scripture: By their fruits ye shall know them (Mt. 7:16), Vladyka Theognost stated: “The fruits of this monastery on Lubyanka are visible to all, not only to those who enter, but even for those who just walk by: it’s a wondrous seminary, it’s a marvelous church which have been built on this place, where the podvig of confession of many archpastors, pastors and pious laity took place…

Our Lord’s Providence acts through people and elects those who through whom His will will be more precisely and faithfully fulfilled. And when we see the works of God, we thank not only God, but also those people through whom these works were completed.” 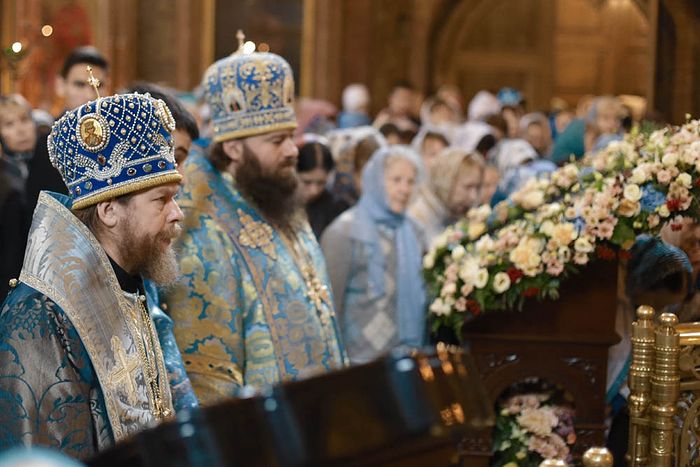 In response Bishop Tikhon of Yegorievsk noted that by the grace of God and through the labors and prayers of the monastery brotherhood and of the teachers and students of the seminary, the wonderful parishioners and monastery benefactors, construction is nearing its end on the new church which will immortalize the podvig of the New Martyrs and Confessors of the Russian Church. He expressed hope that the church would be consecrated on March 15, 2017—the year of the 100th anniversary of the great and fearful revolution which so shook all the foundations of the Russian Fatherland and Church.

“This church,” Vladyka Tikhon highlighted, “is being built in order to pray to those who received a tragic and holy death, and now intercede for us before the Lord, but also to contemplate these events and to learn a lesson from them, and those one hundred years of our state and Church history which began in tragic 1917…

For us it’s quite important that by God’s Providence, precisely on this day—the feast of the Meeting of the Vladimir Icon of the Mother of God—comes this special stage in the building of the church: the elevating of its cupolas and holy crosses.”

“How can we not thank the Providence of God: three monasteries have taken part in the rebirth of our monastery—Pskov Caves Monastery, the Trinity-St. Sergius Lavra, and Donskoy Monastery, and the abbots of these monasteries were gathered today by the Mother of God on Her feast,” Vladyka Tikhon especially noted.

This year on the patronal feast of Sretensky Monastery the main cupola and cross of the new church were consecrated and installed—a significant events in the life of the monastery. Bishop Tikhon celebrated the rite of consecration.

The technical experts who led the process of installing the cupola and cross noted that although weather conditions on the eve of the feast were not favorable for such engineering work—especially worrying were the gusts of wind which could hamper the installation of the cupola—on the day of the feast itself the weather changed during the Divine Liturgy. The elevation and installation of the central cupola and cross went according to plan, observing all engineering standards, to the joy of all the gathered Muscovites and guests of the ancient monastery. 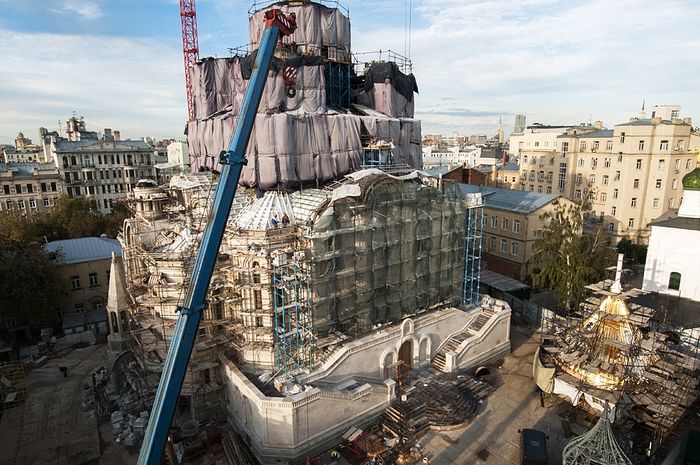 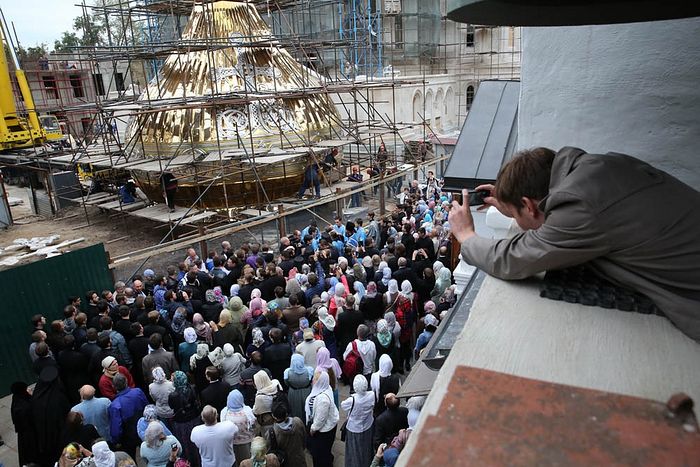 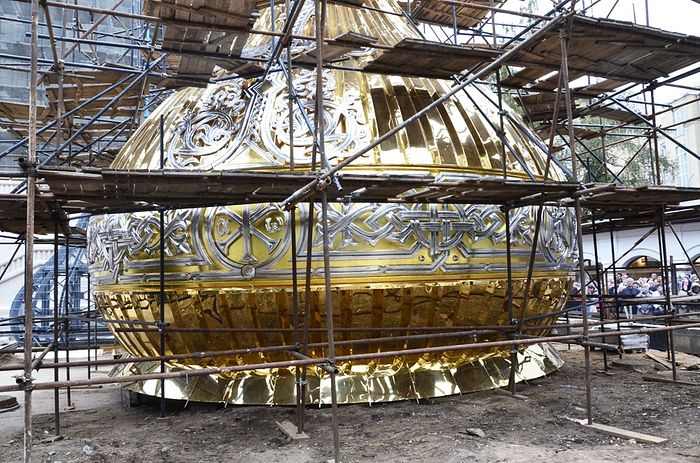 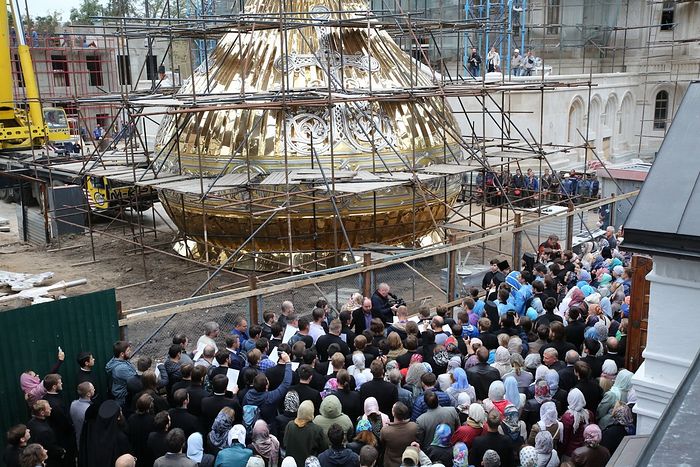 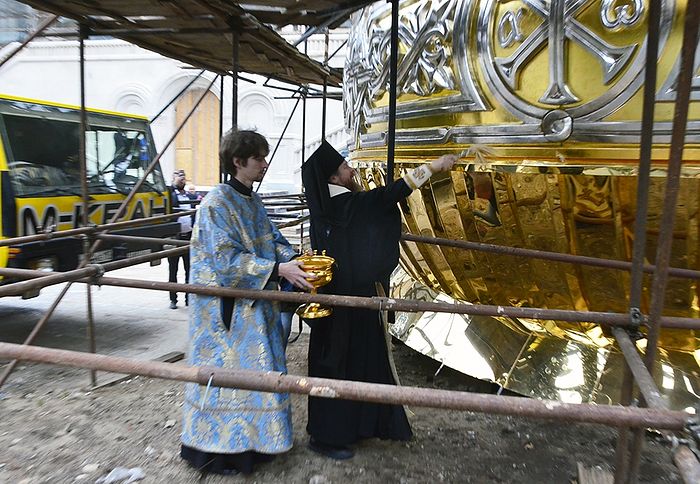 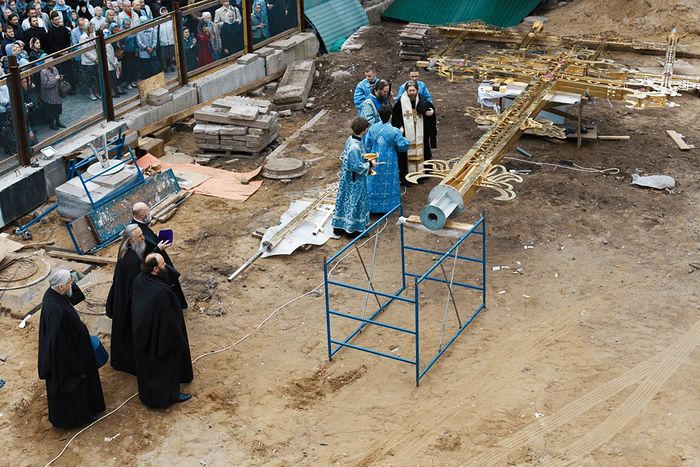 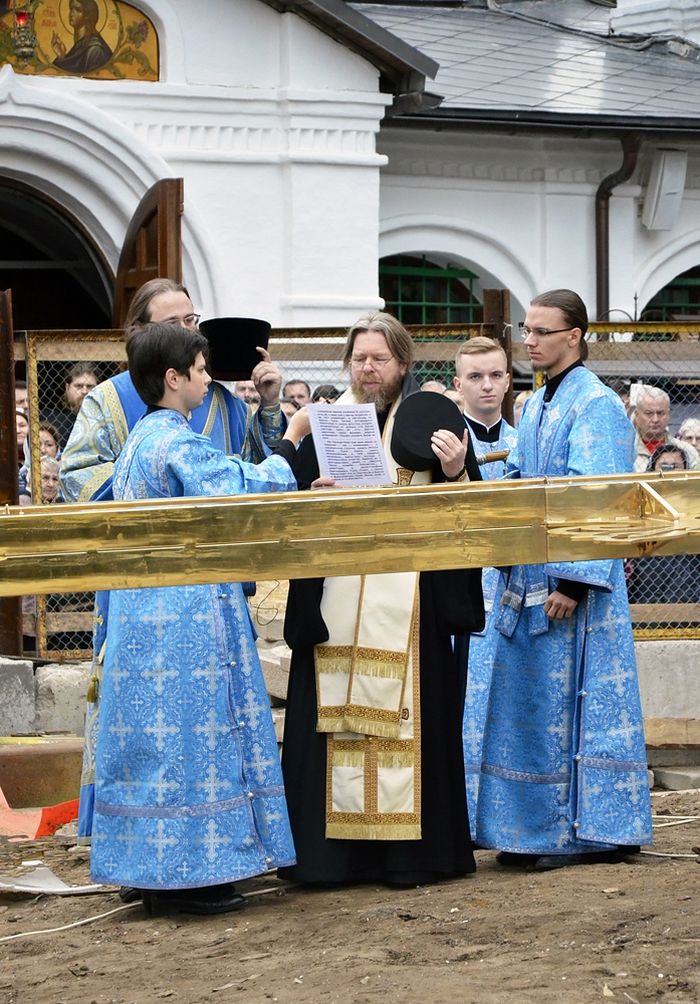 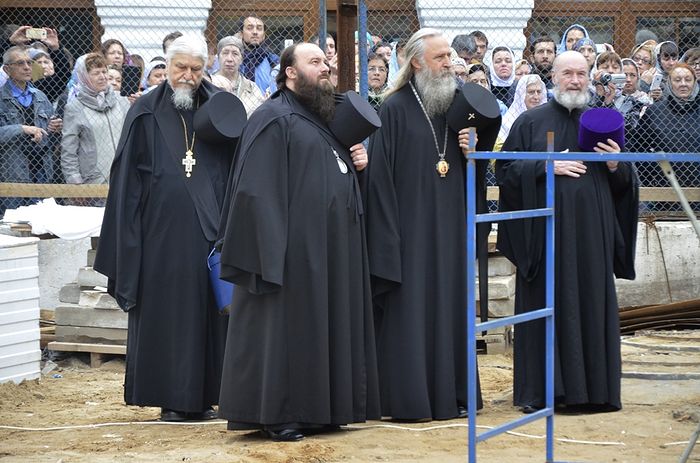 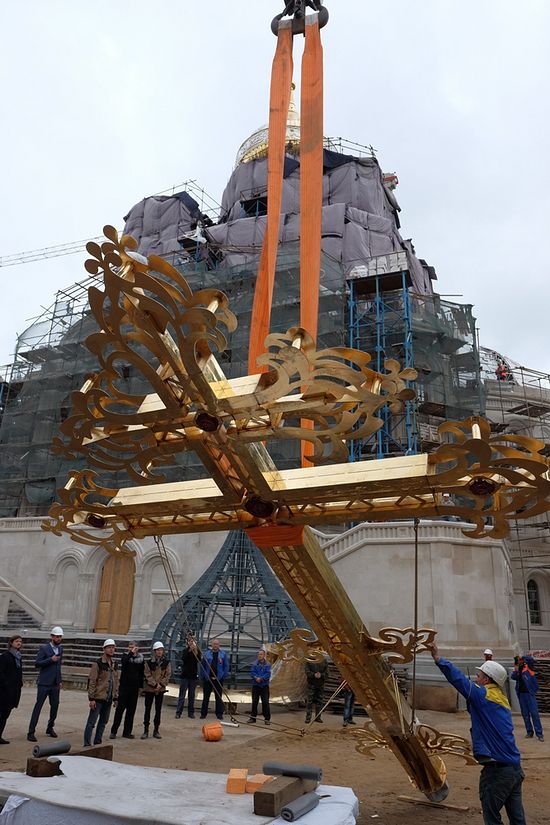 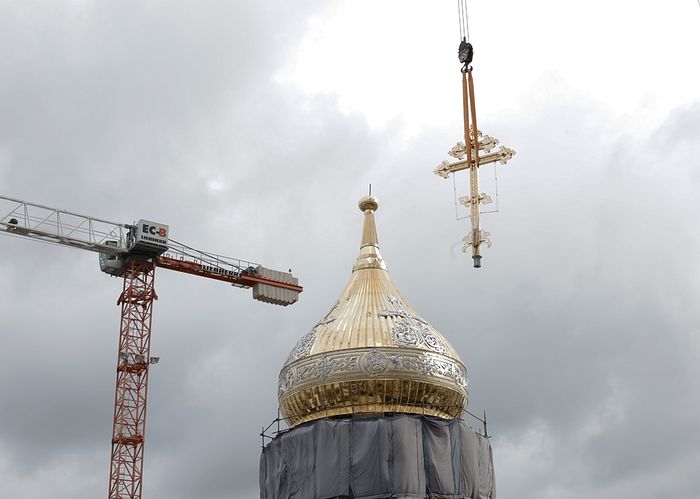 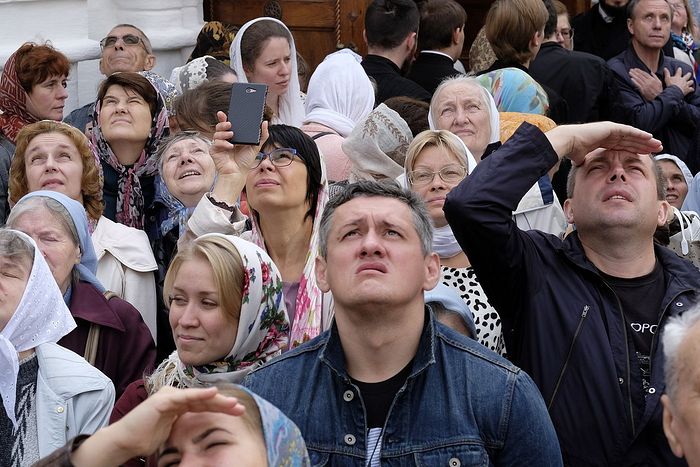 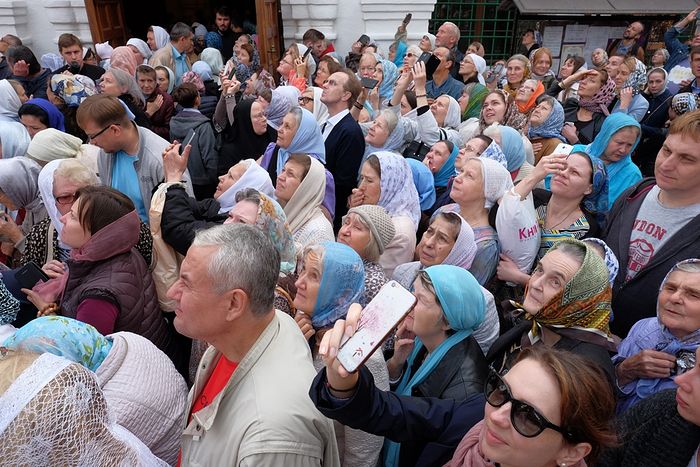 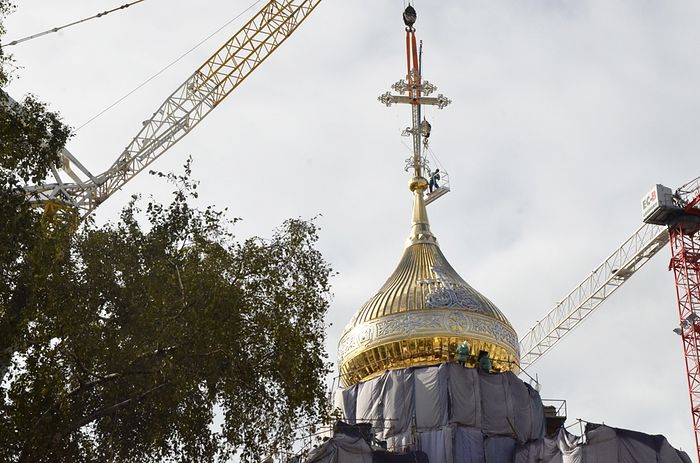 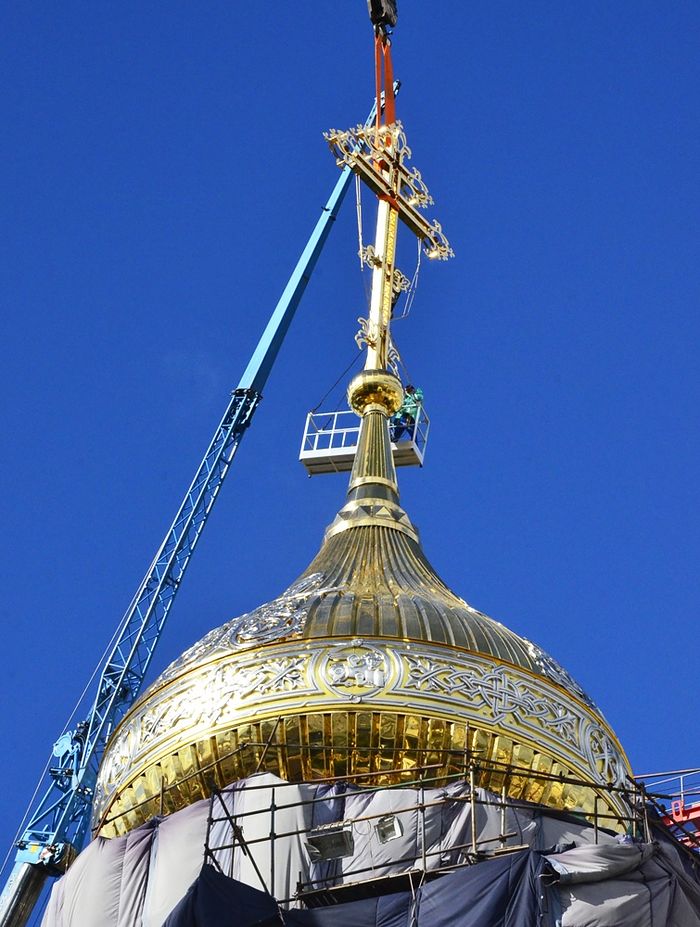 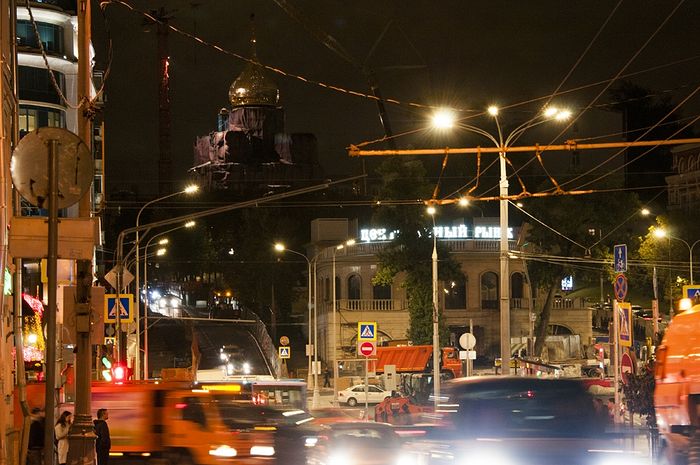 (Video, Photos) San Francisco Cathedral Gets its Cross via Helicopter
The long and storied history of the Annunciation Cathedral of San Francisco got another chapter written in its books on May 21, 2016 as the cross for its new dome was delivered and installed—via helicopter. The Heavenly Intercessor
It was morning, but the inhabitants of Moscow were already on their feet and heading for the Kuchkovo field, where now stands the Sretensky Monastery. What happened then? Why had the people forgotten everything, disturbed to the depth of their souls, and come to such a movement? In Russia there is a saying: “Whoever has not been to sea or in a storm has never prayed to God.”
Comments
×