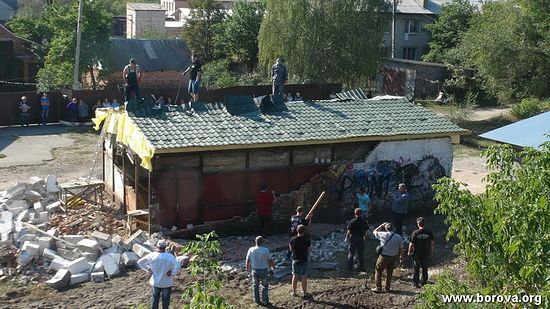 Representatives of the self-proclaimed Kiev Patriarchate attacked the unfinished building of the Ukrainian Orthodox Church in the village of Borovaya, in the Kiev Region.

They destroyed the roof and the walls of the building and threatened the rector and believers, the UOC press service reports.

It has been about ten years that the UOC local community has been forced to celebrate Divine Liturgies in a room they equipped themselves.

"Local authorities persistently refuse to allot land for building a church. To improve the situation, the hostages of which are UOC believers, a local woman gave them her own building in the village suburbs, so that they could rebuild it for the church," the message reads. People locked inside church of Pticha village in Ukraine are freed

People locked inside church of Pticha village in Ukraine are freed
The events in the Pticha village developed on March 30 after an unsuccessful attempt to block the Kiev–Chop international highway, made by representatives of the so-called "Kyiv Patriarchate". The attempt failed and as a result the schismatics locked the Orthodox faithful inside the church for three days without water and food. His Holiness Patriarch Kirill: Unilateral recognition of schism in Ukraine will have catastrophic consequences for the unity of the Orthodox Church
His Holiness reminded the participants in the meeting that last year the hierarchs of the abovementioned entities, ignoring His Beatitude Metropolitan Onufry of Kiev and All Ukraine, the canonical Primate of the Ukrainian Orthodox Church, visited Ukraine on repeated occasions and openly spoke in support of schismatics, promising them the recognition of their structure as an autocephalous Church and claiming that they act on behalf of His Holiness Patriarch Bartholomew of Constantinople.
Comments
×