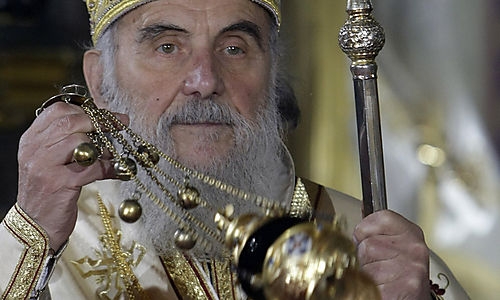 Patriarch Irinej of Serbia on behalf of the Synod sent a letter to Ukrainian President Pyotr Poroshenko, expressing deep concern with oppressions of canonical Orthodoxy in Ukraine and the threat of seizing shrines of pan-Orthodox importance.

"Our Christian conscience is deeply concerned with the destruction of the centuries-old unity of the Orthodox Church in Ukraine and with the support of this destruction that threatens the unity of all of ecumenical Orthodoxy, which is preparing the great Pan-Orthodox Council this year," Patriarch Irinej writes in his letter quoted by the UOC website.

Speaking about the attempts of schismatics to seize the Kiev Caves Lavra, the Pochayev Lavra and numerous Orthodox churches, the patriarch notes that "churches and shrines of a nation exist to reconcile people, to multiply love for God and neighbors, to preserve fraternal accord, not to divide or sow discord."

As was reported, the Ukrainian Culture Ministry recently transferred a church on the territory of the St. Sophia Cathedral complex to the self-proclaimed "Kiev Patriarchate."

Late in December Patriarch Irinej of Serbia sent a letter to Patriarch Kirill and Metropolitan Onufry of Kiev to condemn actions of radicals against the believers of the Ukrainian Orthodox Church.

"Evil can dress itself up in the clothes of faith, light and truth but its fruits - falsehood, division and hatred for neighbours - will invariably expose it. Schismatics from the so-called 'Patriarchate of Kiev' have long been renounced by Orthodox Churches and are Orthodox in name only. And their disdain for the norms of Christian morality and readiness to hate, to lie and to spill blood is living proof of it," the head of the Serbian Church then said in his letter.