The site's casemate walls are reminiscent of the type of urban planning found only in Judah and Transjordan. Credit: Maayan Jaffe-Hoffman.

Archaeologists believe they have found evidence of King David’s footprints in a mysterious two-gated city from 3,000 years ago, mentioned in the Bible’s story of David and Goliath.

The site is known by its modern name, Khirbet Qeiyafa, in Israel’s Elah Valley.

After nearly seven years of excavations, the public can now explore the archaeological findings of Qeiyafa through “In the Valley of David and Goliath,” a new Bible Lands Museum exhibition that opened earlier this week in Jerusalem. The Qeiyafa findings have sparked debate and intrigued historians and archaeologists since they were first revealed.

The city was discovered between Sokho and Azekah, on the border between the Philistines and the Judeans, in the place where David and Goliath battled. It’s mentioned in the Torah in 1 Samuel 17: 1-2.

Carbon-14 dating of some 28 charred olive pits found during excavations date the city as existing around the end of the 11th century BCE, until the early 10th century, in the days of Saul and David.

“No one can argue with this data,” said Prof. Yosef Garfinkel, Yigal Yadin Chair of

Archeology at the Institute of Archeology at Hebrew University of Jerusalem. He, along with Sa’ar Ganor from the Israel Antiquities Authority and Prof. Michal Hazel of Southern Adventist University of Tennessee, led the excavations.

Among the site’s highlights are its two gates: the western gate, which faced Philistia, and the southern gate, which faced Judah. Having two gates for a relatively small city of 5.7 acres is unusual, according to Bible Lands curator Yehuda Kaplan. Gates are the weakest part of any city. The two gates are what led excavators to identify the site with Sha’arayim (Hebrew for “two gates”), a city mentioned in the David and Goliath story in the Book of Samuel, which reads, “…And the slain Philistines lay along the way of Sha’arayim, as far as Gath and Ekron.” (1 Samuel 17:52) It’s also in Judges 16:5 and in Jeremiah 17:19-20.

The gates were corroborated by additional evidence of Jewish activity at Qeiyafa, including thousands of sheep, goat, cow and fish bones, and the absence of non-kosher pig bones, Kaplan said.

Evidence of cultic activity throughout the city was also unearthed, as well as two inscriptions written in the Canaanite script. One was incised on a jar and contains the Hebrew name Eshbaal, son of Beda. The second was inscribed on a pottery shard with only a few identifiable words, including “king” and “judge.” Many of the letters seem to reflect Hebraic writing. Garfinkel suggests this is the earliest writing documentation of the Hebrew language discovered to date.

Among the pottery on the site, less than 2 percent was typical Philistine pottery. Kaplan said if the community had been Philistine, a minimum of 20 percent of Philistine design should have been found. Of the 24 weapons and tools discovered, 67 percent were made from iron and 33 percent from bronze. Use of iron during this period by other sites in Judah, such as Arad and Beersheva, helped archeologists identify Qeiyafa as a Judean site. 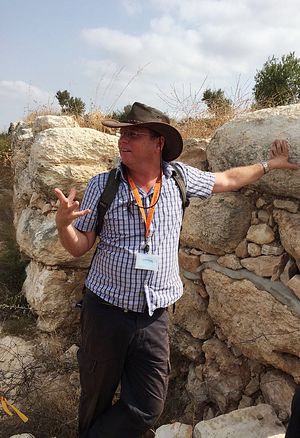 Bible Lands curator Yehuda Kaplan. Credit: Maayan Jaffe-Hoffman.
Finally, casemate walls - two thinner, parallel walls with empty space in between and a belt of houses abutting the casemates, incorporating them as part of the construction - are reminiscent of the type of urban planning found only in Judah and Transjordan.

There’s only one other archaeological reference to King David found in Israel, the Aramaic inscription from the mid-9th century BCE found at Tel Dan. This inscription, on display as part of the new exhibit, is attributed to Hazel, king of Damascus, who boasts about killing a king of Israel and a king of Judah, the latter of which is referred to in the inscription as “King of the House of David.”

While the site stirs the biblical imagination, it also serves a political role.

Biblical Minimalists, a band of biblical scholars and archaeologists trying to eradicate the connection of the Jewish people to the land of Israel by claiming there’s not reliable evidence for what had happened in ancient Israel, can be negated by some of Qeiyafa’s findings. Within 10 days of his publishing the first paper on Qeiyafa, another article claimed the site as Palestinian, Garfinkel said.

“This happens a lot,” said Jacob L. Wright, associate professor of Hebrew Bible at Emory University in Atlanta. “In no other area of the world do you have such a connection to biblical imagination.”

Wright said there’s likely a middle ground. While he believes Garfinkel has placed Qeiyafa in the right time period and that it’s likely a Judean community, experts aren’t certain that King David had anything to do directly with the site.

“One has to separate the bible and archaeology,” Wright said. “The minimalists want to deny the state of Judah and Israel; they are politically driven and have a loose agenda. … But it does not help when the maximalists try to connect everything they find on the ground with Jesus or King David.”

Bible Lands’ Kaplan is confident in the exhibit and the story it’s telling of Qeiyafa.

“Everything you touch at Khirbet Qeiyafa brings you to this biblical period,” he said. Archaeology Discovery: 3,000-Y-O Israeli Site Supports Old Testament Account of Philistines
Archaeologists at Tel Gezer found what Haaretz described as a "monumental building" dated to the 10th century BC, which included artifacts that added weight to what the Bible says about the region's history. Archaeologists Find Pool of Siloam, Confirm Gospel of John Accurate
According to an inscription in one of the tunnels, called the "Siloam inscription," two teams dug in opposite directions — one from the north and the other from the south — and met in the middle. The result was a reliable source of water that enabled Judah to withstand the Assyrian siege.
Comments

Reinhold, Gotthard G.G., Dr.phil.Dipl. theol.1/13/2017 7:18 pm
The name of the Aramaean king of Aram-Damascus is not the same like the family-name of Prof. Michael G. Hasel !!! Concerning the events in Aram-Damascus, Assyrian sources record the death of Adad-'Idri (hebr. Hadad-'ezer) and succession of Hazael, the "son of nobody", an ursurper, who has murdered (2 Kgs. 8:15) the vulnerable successor Bir-Hadad (hebr. Ben-Hadad), the son of 'ezer (= Adad-'Idri; hebr. Hadad-'ezer), succeded Adad-'Idri to the throne and sallied forth to war after a mere seven days (Tel Dan ln. 5 f.).

See Gotthard G.G. Reinhold,The Rise and Fall of the Aramaeans in the Ancient Near East, from Their First Appearance until 732 BCE, New Studies on Aram and Israel, PL ACADEMIC RESEARCH,Frankfurt am Main.Bern.Bruxelles.New York.Oxford.Warszawa.Wien: Peter Lang GmbH, 2016, page 64 ff.
×