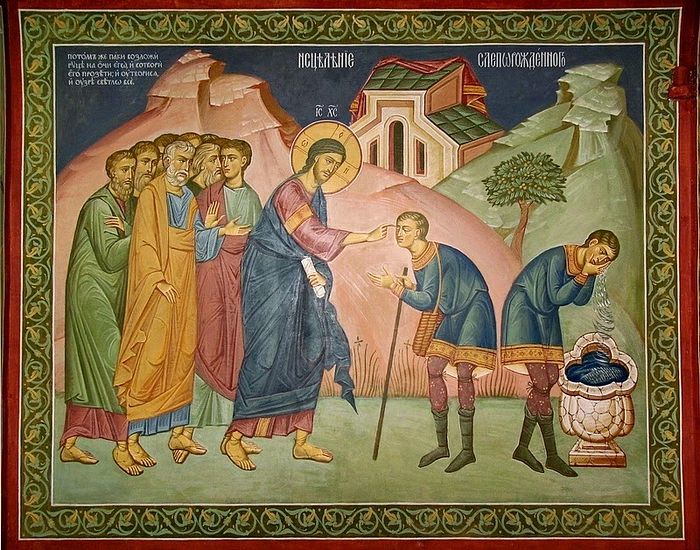 For years, some scholars have doubted the historical accuracy of the fourth Gospel. But a dip in the pool of Siloam will cure that.

The Gospel of John Chapter 9 tells the story of Jesus' healing of a man born blind. After telling his disciples that the man's blindness had nothing to do with either the man's sins or those of his parents, Jesus applied mud to the man's eyes and told him to wash it off at the Pool of Siloam.

Since at least the fifth century, Christians had identified a spot in Jerusalem as the Pool of Siloam and the site of the miracle. But it was not until a decade ago that archaeologists found what they are certain is the ancient pool of Siloam.

Like so many such finds, it was almost by accident. During construction work to repair a water pipe near the Temple Mount, Israeli archaeologists Ronny Reich and Eli Shukron found "two ancient stone steps."

According to Biblical Archaeology Review, "Further excavation revealed that they were part of a monumental pool from the Second Temple period, the period in which Jesus lived." The pool was trapezoidal in shape and 225 feet long.

The Gospel of John isn't the only book of the Bible being archaeologically verified in the immediate area. As the Review tells readers, "the origins of the Siloam Pool reach back even further in history — at least seven centuries before the time of Jesus."

The pool was part of the preparations that King Hezekiah — the subject of a recent BreakPoint — made in anticipation of a siege by King Sennacherib of Assyria.

According to 2 Chronicles 32, "it was Hezekiah who blocked the upper outlet of the Gihon spring and channeled the water down to the west side of the City of David."

While the existence of such a tunnel has been known since the late 19th century, many scholars were hesitant to associate it with the one mentioned in 2 Chronicles. Reich's and Shukron's extensive excavation of the area has led them to conclude that the account in 2 Chronicles attributing it to Hezekiah is in fact correct.

According to an inscription in one of the tunnels, called the "Siloam inscription," two teams dug in opposite directions — one from the north and the other from the south — and met in the middle. The result was a reliable source of water that enabled Judah to withstand the Assyrian siege.

The story about the discovery of the Pool of Siloam also highlights the growing scholarly appreciation for the historical qualities of the fourth Gospel. Traditionally, more liberal scholars not only discounted the historicity of the Gospel of John, they blamed it, a least in part, for the rise of anti-Semitism. They pointed to the repeated use of the phrase "the Jews."

But as Pope Benedict XVI wrote in "Jesus of Nazareth," the Gospel of John "rests on extraordinarily precise knowledge of times and places, and so can only have been produced by someone who had an excellent firsthand knowledge of Palestine at the time of Jesus."

What's more, it's become clear "that the Gospel thinks and argues entirely in terms of the Old Testament and that its whole way of arguing is deeply rooted in the Judaism of Jesus' time."

The point is that it's become increasingly clear that the default scholarly position of disbelieving the Bible because it is the Bible is untenable.

Of course, Christians should already know that. But it's still gratifying to see that other people are able to see it as well. Even if they have to go to the Pool of Siloam to do it. New DC bible museum to display Israeli artifacts
The new Museum of the Bible in Washington, DC, will display a collection of biblical artifacts discovered in Israel after reaching an agreement with the Israel Antiquities Authority (IAA). Sunday of the Paralytic
Archimandrite Tikhon (Shevkunov)
In the lives of each one of us there will still be moments of weakness and failures, of what we call paralysis. They can last for many years, just as with the paralytic at the Sheep pool, of which the Gospel speaks. This paralytic lay for many years awaiting healing. But he believed that a messenger of God would come and heal him. Homily on the Sunday of the Paralytic. On Divine Punishment
St. Ignatius (Brianchaninov)

Homily on the Sunday of the Paralytic. On Divine Punishment
St. Ignatius (Brianchaninov)
This commandment of the Lord has enormous importance for us. It teaches us that we are subjected to sickness and other catastrophes of this earthly life for our sins. When God delivers us from sickness or catastrophe but we return to a sinful life, we are again consigned to catastrophes that are more onerous than those which were our first punishments sent from God to bring us to our senses.
Comments
×