Why do we address the Cross in prayer directly as if to a person?

On this great feast of the Exultation of the Precious and Life-Giving Cross Archpriest Andrew Nikolaidi addresses whether Orthodoxy considers the Cross to be some kind of living organism, capable of thinking, feeling, sovereignly making decisions and acting. 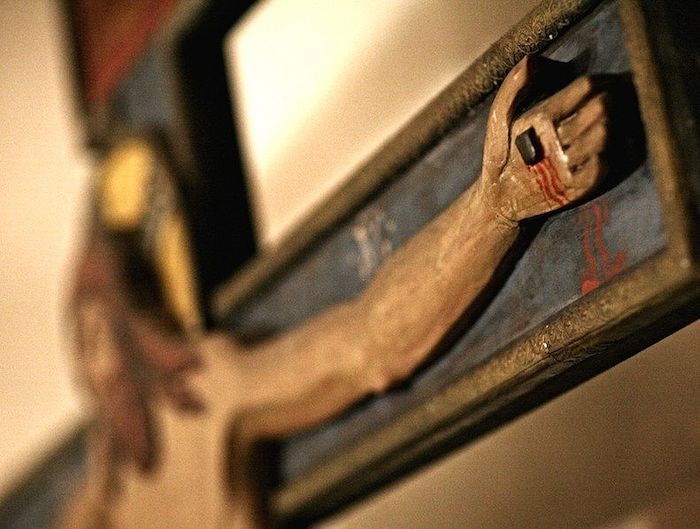 For many Orthodox Christians, beginning to explore the treasury of Christian prayer and trying to delve into the meaning of the prayers, upon reading the prayers to the Cross the question may arise: “Why do we address the Cross, the Wood, in prayer directly as if to a person?”

Indeed, in the Orthodox liturgical tradition there exist a number of prayers of invocation connected with the recollection of the Sacrifice of Christ the Savior on the Cross, and quite often such invocations contain direct recourses to the Cross of the Lord. The most striking example is the prayer to the Precious Cross placed in prayer books at the end of evening prayers, beginning with the words “Let God arise …,” in which we ask: “O All-holy and Life-giving Cross of the Lord, help me with the Holy Lady Virgin Theotokos and with all the saints, unto the ages. Amen.” Upon reading this and other prayers it may seem that Orthodoxy considers the Cross as some kind of living organism, capable of thinking, feeling, sovereignly making decisions, and acting. But, of course, it is not so.

For an Orthodox understanding of the substance of this question we must realize that the Orthodox liturgical tradition is an expression of the deep experience of the life of the Church in the Holy Spirit, that prayer is not only and not so much a recitation before God of our requests, not a list of our necessities or desires sent to the heavenly chancellery. Prayer is above all the mystery of communion with our Creator. It is a great act of creation before God, the contemplation of the grace of God, the dwelling in the rays of the Uncreated Light of God; it is the flight of the human soul and co-creation with the Creator; it is an act of communion by the current of Divine life. And, of course, it is impossible to simplify this great mystery, to reduce it to a mere formality, to the realm of dry arithmetic.

We must also note that the Orthodox liturgical prayer tradition is two thousand years old and built upon the foundation of the Old Testament tradition of prayer, on the foundation of ancient classical philology, of Hellenic Greco-Syrian literature, imbibing into itself all the best born of the human soul, directed heavenward to the Creator, refining all of these human accomplishments in the furnace of the Church, in the fire of the Holy Spirit.

Undoubtedly, the canon of prayers is a model of lofty poetry. To confirm this thesis it’s enough to recall that organized systematic rhyme is first met namely in the Church’s liturgical prayer tradition, in the Akathist to the Most Holy Theotokos. Naturally, in poetry there exist special means for imparting a certain dynamism and emotional tint to the output of the human soul—so-called tropes and patterns. One of these means is personification, that is, applying to inanimate objects or phenomena the characteristics and actions of animate objects. The most vivid example of the use of personification in the Bible is the invective of the holy prophet Moses the God-Seer, found in the thirty-second chapter of the Biblical book of Deuteronomy, in which the prophet calls upon the heavens and the earth to bear witness to his words: Give ear, O ye heavens, and I will speak; and hear, O earth, the words of my mouth (Deut. 32:1). St. Gregory the Theologian, leaving Constantinople and pronouncing his final words of consolation to his flock, addresses a farewell to his temple. Of course, neither the prophet Moses, nor St. Gregory considered the earth or the church walls to be animate people. They spoke in the language of their time, of poetic imagery, desiring to underline the significance of this or that event of private or public life, giving these objects or events the properties of an animate object.

It is precisely with such personification that we address the Cross of Christ in the Orthodox liturgical prayer tradition, in our prayers to the precious Cross. As in all prayers of the Orthodox Church, this prayer preserves a strict Christo-centricity. The center of any Orthodox invocation is God. If we attentively listen to the words of this prayer then we will understand that we are supplicating that the Cross might save us “by the power of our Lord Jesus Christ crucified on thee [that is, on the Cross], Who went down to hell and trampled on the power of the devil, and gave us thee, His venerable Cross, for driving away all enemies.” In this way, the source of the miraculous strength of the Cross is God Himself, crucified on the Cross, and it is precisely to Him that we turn in prayer, finding its expression in beautiful poetic forms. The Cross shows us the life of God
Archimandrite Sergius (Bowyer)

The Cross shows us the life of God
A homily on the Sunday before the Elevation of the Cross
Archimandrite Sergius (Bowyer)
What the Cross offers us is an image and icon of what God’s life is like, what His love is like, and ultimately what He calls us to. This life of God for man is a cross, which ultimately leads us to our resurrection—not only personally, but corporately on the last day. Cross in a church in West Ukraine starts bleeding church rector claims
He explains the event saying that the Lord grieves over the persecutions His Church is subjected to in Ukraine.
Comments
×