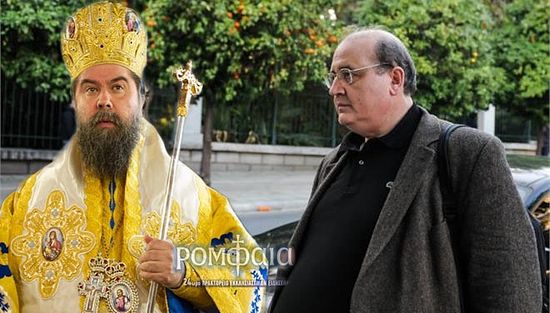 Hierarchs of the Church of Greece have commented on the scandalous statements made by Greek Education Minister Nikos Filis, reports AgionOros.ru.

Minister Filis announced the complex school system reform in an interview with Greek media. Following the changes to the content of Religious Studies courses, History will be cleared of “national prejudices” as well. In addition, there are plans to introduce compulsory Sex Education for which the relevant “curricular material” is under development. Moreover, Filis subjected the position of the Church during the Second World War to unjustified criticism.

Metropolitan Theologos of Serres, in his interview with Greek television, noted that “the Education Minister is constantly attacking the Church without cause. For our part, we do not hold a grudge against him, but at the same time we cannot be silent when historical truth is being deliberately distorted.”

Metropolitan Georgios of Livadeia demanded that the government stop the one-sided imposition of the new school curriculum without taking into account the position of the Orthodox Church.

In the view of Metropolitan Makarios of Siderokastron, the school reform and changes in teaching Religious Studies are aimed at “the de-Christianization of society. This is a catastrophe and suicide for Greeks.”

Metropolitan Prokopios of Neapolis characterized the current education reform as “a dangerous and useless experiment which is capable of putting an end to the Greek educational tradition and religious identity. The Church cannot remain indifferent and unconcerned about anti-Orthodox experiments like these.”

Metropolitan Amvrosios of Kalavrita stressed that “Greece, Orthodoxy and the Church of Greece are being persecuted!” The metropolitan called for discharging the scandalous minister Filis without delay and for stopping these reforms which are disastrous for Greece.

Primate of the Church of Greece Archbishop Ieronymos of Athens sharply reacted to the Minister of Education’s statements as well, suspending all contact with members of the government. anastasia11/8/2016 3:09 am
:( really sad. I don't understand the obsession with the western world, and wanting to mimic it. I've wanted to move to Greece for yearssss but I think i'm just as fu*ked here in Australia than i am there. De-Christianisation is happening globally, i never would have thought it would at home though. Very disappointed.. these articles just cut me to the heart. Realize what you have before it's gone Ellada mou.. Lord have mercy x

Nomiki Vassis9/28/2016 3:45 pm
The Greek ministers should be ashamed of them self's.
The Greeks got threw so many battles with the help of our god and his mother.

I live abroad and make sure our Student are taught the Orthodox Religion.I am so proud that I do not live in Greece with all these atheist ministers the people should vote them out.
Greece is a religious country.Teach our Greeks about God and faith and the history that was written with all the Greek battles.
×