Holy Martyrs Prince Michael and his counselor Theodore, of Chernigov 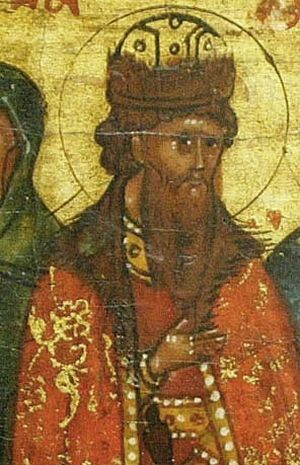 The Holy Prince Michael of Chernigov
The Holy Prince Michael of Chernigov, son of Vsevolod Ol’govich the Dark-Red (+ 1212), was noted from childhood for his piety and mildness. His health was very poor, but in 1186, trusting in the mercy of God, the young prince asked for the holy prayers of St Nikita the Stylite of Pereyaslavl (May 24), who during these years received renown by his prayerful intercession before the Lord.

After he received a wooden staff from the holy ascetic, the prince was healed at once. In 1223 Prince Michael took part in a council of Russian princes at Kiev, debating whether to aid the Polovetsians against the approaching Mongol-Tatar hordes. With the death of his uncle, Mstislav of Chernigov in the Battle at the Kalka River in 1223, St Michael became Prince of Chernigov.

In 1225 he was invited to be prince of the Novgorod people. Through his sense of justice, compassion and firmness he gained the love and respect of Old Novgorod. This was particularly important for the Novgorodians, since the accession of Michael as prince signified a reconciliation of Novgorod with the city of Vladimir’s holy Great Prince George Vsevolodovich (March 4), whose wife was the holy princess Agatha, sister of Prince Michael.

But St Michael did not long remain prince at Novgorod. He soon returned to his native Chernigov. To the stipulations and requests of the Novgorodians to remain prince he answered that Chernigov and Novgorod ought to become kindred lands, and their inhabitants like brothers, and he would forge the bonds of friendship of these cities.

The noble prince assiduously concerned himself with the building up of his appenage realm. But it was difficult for him in these troubled times. His activity provoked unease in the Kursk Prince Oleg, and in 1227 internecine strife nearly erupted, but Metropolitan Cyril of Kiev reconciled them. And in this same year Prince Michael peacefully resolved a dispute between the Kiev Great Prince Vladimir Rurikovich and the Galich prince. In 1235 Prince Michael occupied the throne of Kiev.

Troublesome times ensued. In 1238 the Tatars (Mongols) laid waste to Ryazan, Suzdal, and Vladimir. In 1239 they moved against South Russia, and ravaged the left bank of the Dniepr River, and the lands of Chernigov and Pereyaslavl. By the autumn of 1240 the Mongols were coming close to Kiev. The khan’s emissaries proposed that Kiev surrender voluntarily, but the prince would not negotiate with them.

Prince Michael rode urgently to Hungary, to persuade the Hungarian king Bela to organize allied forces to resist the common enemy. St Michael tired to recruit both Poland, and the German emperor into the struggle against the Mongols, but the moment for a combined resistance was lost. Rus was devastated, and later Hungary and Poland. With no foreign support, Prince Michael returned to the ruins of Kiev and for a certain time he lived near the city on an island, and then he resettled in Chernigov.

The prince did not abandon hope in the possibility of an united Christian Europe against the Asiatic nomads. In 1245, at the Council of Lyons in France, his co-worker Metropolitan Peter (Akerovich) was sent as emissary by St Michael, calling for a crusade to march against the pagan Horde. Catholic Europe in the persons of its chief spiritual leaders, the Roman Pope and the German emperor, betrayed the interests of Christianity. The Pope was involved in a war with the German emperor, and the Germans took advantage of the Mongol invasion to attack Rus themselves.

In these circumstances affecting Christianity in general, there is a universal significance to the confessor’s deed of the martyred Orthodox Prince St Michael of Chernigov in the midst of the pagan Horde. In Rus emissaries of the khan soon appeared, in order to conduct a census of the Russian population and to impose taxes upon it.

The prince was ordered to make full submission to the Tatar khan, and for his princely realm, the khan would grant a special charter. The emissaries informed Prince Michael that it was necessary for him to journey to the Horde for an affirmation of rights to rule the princedom under the khan’s charter. Seeing the woeful plight of Rus, Prince Michael recognized the need to obey the khan, but as a fervent Christian he knew that he would not deny his faith before the pagans. From his spiritual Father, Bishop John, he received a blessing to journey to the Horde and be a true confessor of the Name of Christ. 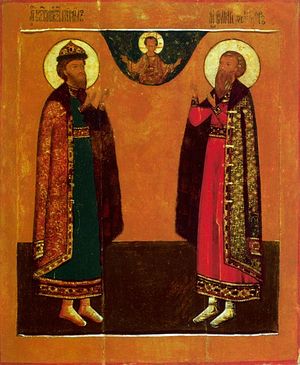 Holy Martyrs Prince Michael and his counselor Theodore, of Chernigov
With the holy Prince Michael on the journey to the Horde went his faithful friend and companion, the noble Theodore. At the Horde they knew about Prince Michael’s attempts to organize an uprising against the Tatars in concert with Hungary and the other European powers. His enemies had long sought the opportunity to destroy him.

In 1246 when Prince Michael and the boyar Theodore arrived at the Horde, they were instructed on how to go to the khan, to proceed through a fire to cleanse them of their evil intents, and to worship the primal elements considered gods by the Mongols: the sun and fire. In answer to the pagan priests commanding them to perform the pagan rituals, the holy Prince replied, “A Christian worships only God, the Creator of the world, and not creatures.”

They reported to the khan about the firmness of the Russian Prince. Batu’s attendant El’deg delivered the conditions: either fulfill the demands of the pagan priests, or die in torments. But this also was followed by the resolute answer of holy Prince Michael, “I am prepared to submit to the emperor, since that God has entrusted him with the destiny of the earthly kingdoms, but as a Christian, I cannot worship idols.” The fate of the brave Christians was sealed.

Taking courage in the words of the Lord: “Whoever would save his life, shall lose it, and whoever will lose his life for My sake shall save it” (Mt.16:25), the holy prince and his devoted boyar prepared for a martyr’s death and received the Holy Mysteries, which their spiritual Father gave them, foreseeing this possibility. The Tatar executioners seized the prince and for a long time they beat him fiercely, until the ground ran crimson with blood. Finally, Domanus, an apostate from the faith in Christ, cut off the head of the holy martyr.

The Tatars deceitfully promised St Theodore great honor and his lord’s princely rank if he would fulfill the pagan ritual. But St Theodore was not swayed by this, and he followed in the path of his prince. After quite vicious torments they beheaded him. The bodies of the holy passion-bearers were thrown to be eaten by dogs, but the Lord miraculously guarded them for several days, until faithful Christians could secretly bury them with reverence. Later on, the relics of the holy martyrs were transferred to Chernigov.

The confessor’s act of St Theodore amazed even his executioners. Persuaded of the Russian people’s steadfast fidelity to the Orthodox Faith , and their readiness to die for Christ with joy, the Tatar khans decided not to try the patience of God as before, and ceased demanding that Russians at the Horde perform any pagan rituals. But the struggle of the Russian nation and the Russian Church against the Mongol Yoke continued for yet a long time. The Orthodox Church was adorned in this struggle by new martyrs and confessors. Great Prince Theodore was poisoned by the Mongols. Also martyred were St Roman of Ryazan (+ 1270), St Michael of Tver (+ 1318), his sons Demetrius (+ 1325) and Alexander (+ 1339). All of these took courage from the example and holy prayers of the Russian Protomartyr of the Horde, St Michael of Chernigov.

On February 14, 1572, at the wish of Tsar Ivan Vasilievich the Terrible, and with the blessing of Metropolitan Anthony, the relics of the holy martyrs were transferred to Moscow, to the temple dedicated to them. From there in 1770 they were transferred to the Visitation cathedral, and on November 21, 1774 to the Archangel cathedral of the Moscow Kremlin.

The Lives and service to Sts Michael and Theodore were compiled in the mid-sixteenth century by the renowned church writer, St Zenobios of Otonsk.

“The generation of the upright shall be blessed,” says the holy Psalmodist David (Ps. 111/112:2). This occurred in full measure for St Michael. He is at the head of many famous families in Russian history. His children and grandchildren continued the holy Christian service of St Michael. The Church also numbers his daughter St Euphrosyne of Suzdal (September 25), and his grandson St Oleg of Briansk (September 20) among the saints.