Sign of the cross is a great power, Metropolitan Onuphry says 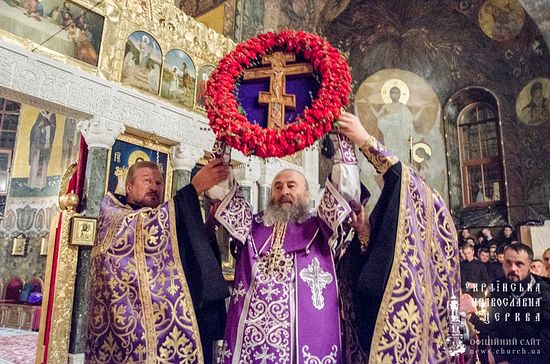 On September 27, 2016, the feast of the Exaltation of the Holy Cross, during the Divine Liturgy at the Kiev Caves Lavra His Beatitude Metropolitan Onuphry of Kiev and All Ukraine spoke of the spiritual power of the Cross in the lives of Christians, reports the information and education department of the UOC-MP.

“The Cross of Christ is a great relic and we, believers in Christ, venerate the Cross of the Lord as the tree on which our salvation was accomplished and our sins were forgiven,” the archpastor stressed.

His Beatitude noted that a Christian receives great power from that tree—“that power which we need to have in order to vanquish the devil, and to struggle with our passions, sins and vices.”

His Beatitude Metropolitan Onuphry emphasized the need to “make the Sign of the Cross correctly—not in a slipshod way, but prayerfully – in the Name of the Father and the Son and the Holy Spirit.”

Correctly and prayerfully making the Sign of the Cross brings great power. “We even cannot imagine what great power we receive by making the Sign of the Cross of the Lord,” His Beatitude Metropolitan Onuphry pointed out. “If it were not for theCcross, if it were not for the grace of God, the demons would destroy the whole of mankind in one moment; but it is by the power of the Lord’s Cross that the universe is upheld.” Fr. Dumitru Staniloae: The Cross as a Means of Sanctification and Transformation of the World
Fr. Dumitru Staniloae
Through the Cross, Christ sanctified His body—the link with the world. He rejected the temptations sent to Him by the world, that is to taste the pleasures, to satisfy His needs unrestrained or to avoid pain and death. If we, in the same way, ward off the temptations of sin and patiently suffer the pain of death, sanctity can spread from His body to all bodies and throughout the world.