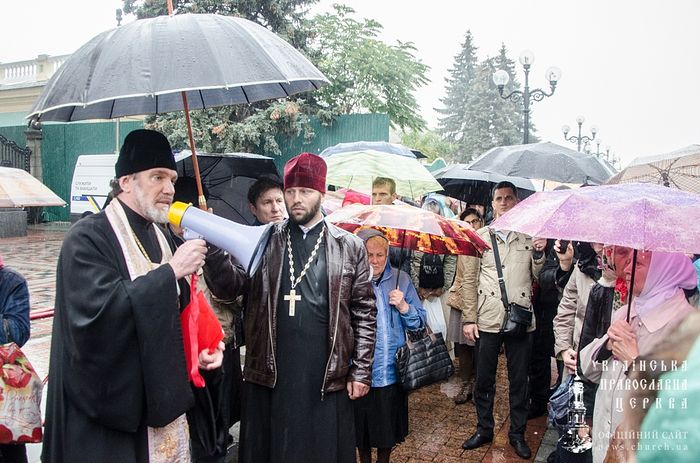 On October 5, 2016, the clergy and believers of the Ukrainian Orthodox Church of the Moscow Patriarchate (UOC-MP) prayed to God to bring the people’s deputies to their senses and prevent them from becoming instruments in the anti-religious struggle. On October 6 the scandalous bill no. 4128 which may legalize the raiding seizure of canonical churches is to be considered by the Verkhovna Rada (the Ukrainian Parliament), reports the UOC-MP’s Education and Information Department.

On this day around 1,000 people gathered to pray near the Ukrainian Parliament. The clergy performed a prayer service for peace in Ukraine.

In the course of the peaceful gathering, representatives of the deputies body from the opposition came out to the Ukrainian Orthodox demonstrators to listen to their demands and bring them to the legislative body’s attention.

During the rally against the notorious draft law more than 800 signatures against the bill were collected. In their view, this amendment encourages the takeover of temples by raiding and fomenting religious strife.

It should be noted that the day’s session of the Verkhovna Rada commenced with a speech from Deputy Viktor Elenskiy in which he openly called for discrimination and aggression against Ukrainian citizens.

The Rada plans to adopt the amendment to Ukrainian law “On the freedom of conscience and religious organizations” on October 6. According to the logic of the Elenskiy bill, any outsider may declare himself a member of one or another parish and vote for its transfer to other jurisdiction. To date, dozens of temples of the canonical Ukrainian Orthodox Church have been taken over this way.

Representatives of the World Council of Churches (WCC), members of the Secretariat of the All-Ukrainian Council of Churches and Religious Organizations, the Scientific-Expert Department of the Verkhovna Rada, the Institute for Religious Freedom, lawyers of the International Institute for Protection of Human Rights in the Eastern Europe along with religious studies specialists from Ukraine have also spoken up against the bill.

The experts assert that the amendments to existing legislation, proposed by V. Elenskiy, entail unjustified state interference in the autonomy of religious communities and the emergence of new conflict situations due to confusion in the introduction of changes and alterations into organizations’ constitutions. Verkhovna Rada to consider bill no. 4128 on Thursday

Verkhovna Rada to consider bill no. 4128 on Thursday
According to its authors, the aim of the draft law is “to provide religious communities with the right to conscious choice and the free and unimpeded change of their subordination to religious centers for the satisfaction of their spiritual needs and the appropriate expression of religious feelings.”