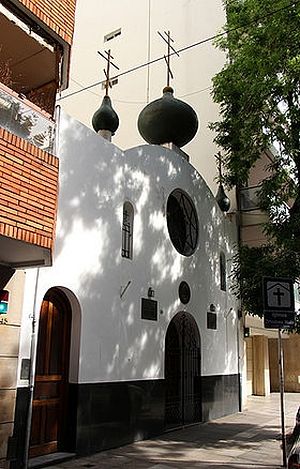 Annunciation Cathedral in Buenos Aires/ Photo: https://ru.wikipedia.org/
The first Russian monastery on the continent is to be opened in South America.

It is planned to open the monastery in Argentina on a small plot of land with a house which was donated to local priest Bartholomew (Oviedo), the press service of the Moscow Patriarchate Argentine Diocese reports.

There are several parishioners of the diocese who want to take monastic vows, and at the same time the number of local residents coming to pray in Russian churches is growing.

The Argentine Diocese, founded by Russian emigrants, celebrates its 70th anniversary this year. His Grace Bishop John of Caracas and South America: My Challenge is to Heal the Schism and Return the Flock and Our Churches

His Grace Bishop John of Caracas and South America: My Challenge is to Heal the Schism and Return the Flock and Our Churches
What did our ancestors do to deserve such reverence, how will parish life change in the next 20 years, what problems are being faced today by Orthodox Christians in Latin America? These were the topics discussed by Bishop John. Patriarch Kirill to tour Latin America
The metropolitan recalled that Patriarch Kirill had visited Cuba back when he was a metropolitan, and had met with the Cuban administration. He supervised the construction of a Russian church in Havana and he consecrated that church.
Comments
×