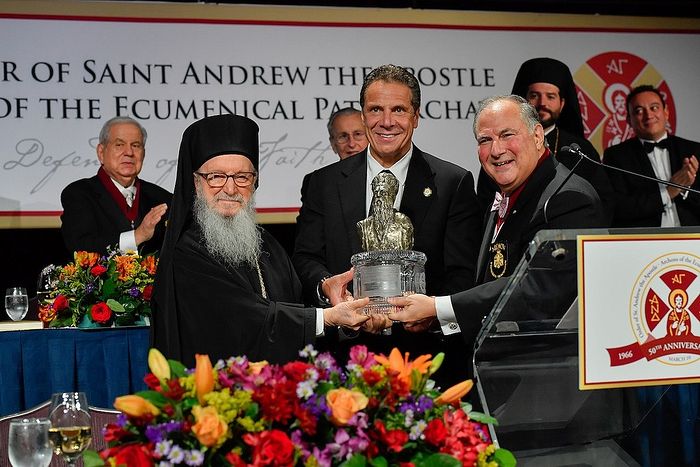 On October 15, 2016 the Archons of the Ecumenical Patriarchate, led by Archbishop Demetrios, presented the Athenagoras Human Rights Award to New York Gov. Andrew Cuomo at the New York Hilton.

The award is in recognition of Cuomo helping the Greeks get through bureaucratic red tape to rebuild St. Nicholas Church, which had been destroyed in the terrorist attack of 9/11. The Archons' website explains that he was "the instrumental person in the process of securing an agreement with the Port Authority of New York and New Jersey regarding the rebuilding and resurrection of St. Nicholas Greek Orthodox Church and National Shrine at the World Trade Center."

This award has caused serious repercussions throughout the Orthodox Church, as well as among Catholics, as Gov. Cuomo is a staunch and unabashed promotor of abortion and same-sex marriage—two "evils of the day" that the Orthodox Church can in no way condone.

Cuomo, whose record on life has been styled a “lust for abortion rights,” has called pro-lifers and those who believe in traditional marriage “extreme,” saying they “have no place in the state of New York, because that’s not who New Yorkers are.” Abortions are allowed at any time in his state, he was instrumental in legalizing gay “marriage” in New York, and he became the first to singlehandedly mandate public transgender accommodation laws.

Fr. Johannes Jacobse of the American Orthodox Institute stated "Giving a human rights award to Gov. Cuomo is like giving a responsible motherhood award to Madonna. It just doesn't work. Cuomo is one of the most aggressive abortion defenders in politics today. His defense of the abortion industry is relentless."

Cuomo, though officially a Roman Catholic, is prohibited from receiving communion, as stated by canon lawyers, for his various anti-Catholic stances. MarinaM10/27/2016 1:46 pm
So sad. Wonderful that Cuomo helped with St. Nicholas but hardly deserving of a Human Rights Award?

Matthew10/27/2016 10:09 am
Its seems somehow right that the award should be named after Patriarch Athenagoras.

virginia10/27/2016 5:04 am
it seems done for the love of power and money, compromising a whole community of faithful greeks who might believe it is wrong.
i am not greek but of syrian ancenstry.
it seem contradictory and shameful

vaseili doukas10/27/2016 4:01 am
See Papa Demtri's posting about this betrayal of the unborn. In the law we would say that the GOA has aided and abetted the killing of babies.

''Officially'' these people are still in Communion with Moscow - in word anyway. In deed, they are akin to heterodox, and have much more in common with them, than Orthodox. And they try to peddle the laughable lie that the CIA spy in Constantinople is ''first among equals'' and the ''spiritual leader'' of 250 million Orthodox like some kind of Dalai Lama guru, and other such nonsense which I shan't waste my time repeating. I speak as a Greek Cypriot who spent my childhood in the diaspora so speak from first hand experience. Left very bitter memories, and almost caused me to leave the Church. Thank God for ROCOR is all I can say.

Anthony10/26/2016 8:56 pm
What a surprise. Just when I thought the pseudo Orthodox Greek church in Amerika couldn't get much worse, they sink to new abominable lows. Absolutely awful. Sadly Greek 'Orthodox' churches outside of Greece are pretty much secular cultural clubs for the Greek diaspora to gather and gossip after they take Communion, having arrived five minutes prior to the priest coming out with the Holy Communion.

Father Andrew in his Orthodox England blog has a good post on Tradition where he shreds the pseudo Orthodox church:

There is only one Tradition, just as there is only one Church. True, there are local customs, but some of these are bad and come from spiritual decadence. These have come into the Church in recent times through Western influence and can be encountered especially in Greece, Cyprus and in parts of Romania and the Patriarchate of Antioch, which have been exposed for some generations to Western decadence. In their parishes in the USA and elsewhere, some of these groups actually use organs and people sit in pews during Church services! Of course, this is no part of the Tradition and is only justified as a custom because it is what heretics do. Here there are clear cases where the Tradition is being lost. However, modernists justify all this saying that ‘you can have organs or not have organs, you can have pews or not have pews – these are merely differences of custom’. This is a lie.