As this site is from a secular source, it speaks of the "reputed" tomb of Christ and asks if the Holy Sepulchre is truly His tomb. As Orthodox Christians we have no doubt that the Tradition of the Church is true, but we have published this article as is, as it provides the latest details, photographs, and videos of the work being done on the Lord's Tomb—O.C. 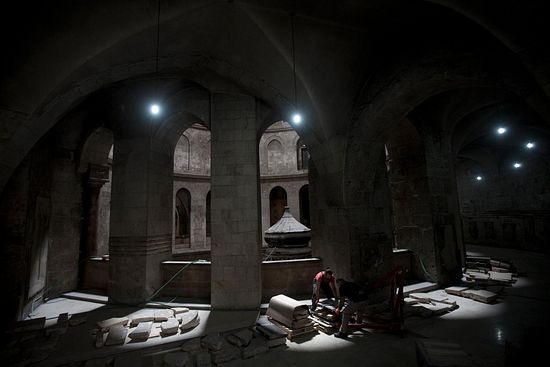 Members of the conservation team lift a stone to clean and digitally scan before reinstalling it on the façade of the Edicule, the shrine that houses what is believed to be the tomb of Jesus. PHOTOGRAPH BY ODED BALILTY, AP FOR NATIONAL GEOGRAPHIC

Researchers have continued their investigation into the site where the body of Jesus Christ is traditionally believed to have been buried, and their preliminary findings appear to confirm that portions of the tomb are still present today, having survived centuries of damage, destruction, and reconstruction of the surrounding Church of the Holy Sepulchre in Jerusalem's Old City.

The most venerated site in the Christian world, the tomb today consists of a limestone shelf or burial bed that was hewn from the wall of a cave. Since at least 1555, and most likely centuries earlier, the burial bed has been covered in marble cladding, allegedly to prevent eager pilgrims from removing bits of the original rock as souvenirs.

When the marble cladding was first removed on the night of October 26, an initial inspection by the conservation team from the National Technical University of Athens showed only a layer of fill material underneath. However, as researchers continued their non-stop work over the course of 60 hours, another marble slab with a cross carved into its surface was exposed. By Friday night, just hours before the tomb was to be re-sealed, the original limestone burial bed was revealed intact. 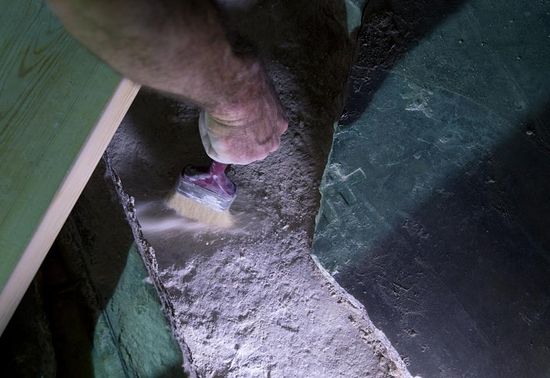 A restorer removes debris beneath a broken marble slab to expose the original rock surface of what is considered the burial place of Jesus. PHOTOGRAPH BY ODED BALILTY, AP FOR NATIONAL GEOGRAPHIC

"I'm absolutely amazed. My knees are shaking a little bit because I wasn't expecting this,” said Fredrik Hiebert, National Geographic's archaeologist-in-residence. "We can't say 100 percent, but it appears to be visible proof that the location of the tomb has not shifted through time, something that scientists and historians have wondered for decades."

In addition, researchers confirmed the existence of the original limestone cave walls within the 18th-century Edicule, or shrine, which encloses the tomb. A transparent window has been cut into the southern interior wall of the shrine to expose one of the cave walls. 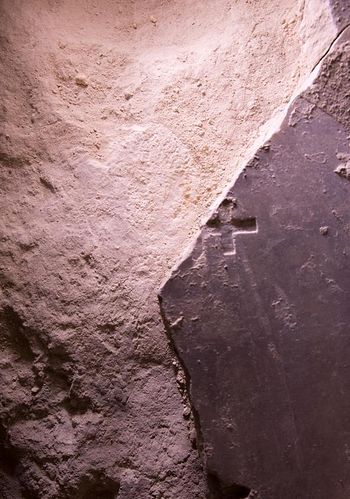 Inscribed with a Christian cross, this broken marble slab may date to the Crusader era. PHOTOGRAPH BY ODED BALILTY, AP FOR NATIONAL GEOGRAPHIC

"This is the Holy Rock that has been revered for centuries, but only now can actually be seen," said Chief Scientific Supervisor Professor Antonia Moropoulou, who is directing the conservation and restoration of the Edicule.

Was This Really the Tomb of Christ?

While it is archaeologically impossible to say that the tomb recently uncovered in the Church of the Holy Sepulchre is the burial site of an individual Jew known as Jesus of Nazareth, there is

indirect evidence to suggest that the identification of the site by representatives of the Roman emperor Constantine some 300 years later may be a reasonable one.

The earliest accounts of Jesus' burial come from the Canonical Gospels, the first four books of the New Testament, which are believed to have been composed decades after Christ's crucifixion around A.D. 30. While there are variations in the details, the accounts consistently describe how Christ was buried in a rock-cut tomb belonging to Joseph of Arimathea, a wealthy Jewish follower of Jesus.

Archaeologists have identified more than a thousand such rock-cut tombs in the area around Jerusalem, says archaeologist and National Geographic grantee Jodi Magness. Each one of these family tombs consisted of one or more burial chambers with long niches cut into the sides of the rock to accommodate individual bodies. 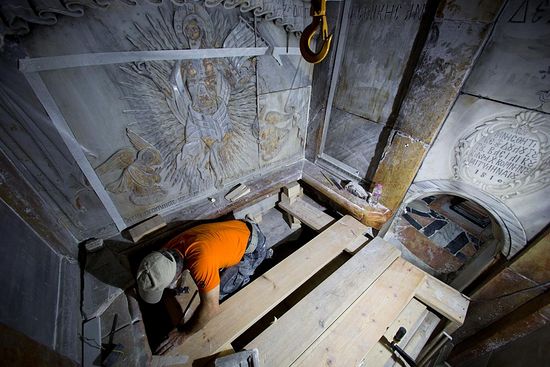 A conservator cleans the surface of the stone slab venerated as the final resting place of Jesus Christ. PHOTOGRAPH BY ODED BALILTY, AP FOR NATIONAL GEOGRAPHIC

"All of this is perfectly consistent with what we know about how wealthy Jews disposed of their dead in the time of Jesus," says Magness. "This does not, of course, prove that the event was historical. But what it does suggest is that whatever the sources were for the gospel accounts, they were familiar with this tradition and these burial customs."

Outside the City Walls

Jewish tradition forbade burial within the walls of a city, and the Gospels specify that Jesus was buried outside of Jerusalem, near the site of his crucifixion on Golgotha ("the place of skulls"). A few years after the burial is said to have occurred, the walls of Jerusalem were expanded, putting Golgotha and the nearby tomb within the city.

When Constantine's representatives arrived in Jerusalem around A.D. 325 to locate the tomb, they were allegedly pointed to a temple built by the Roman emperor Hadrian some 200 years earlier. Historical sources suggest that Hadrian had the temple built over the tomb to assert the dominance of Roman state religion at the site venerated by Christians, much as he had a pagan temple built on the site of the Jewish Second Temple, which was destroyed by the Romans in A.D. 70.

According to Eusebius, Bishop of Caesarea, the pagan temple was razed and excavations beneath it revealed a rock-cut tomb. The top of the cave was sheared off to expose the interior, and a church was built around it to enclose the tomb. The church was completely destroyed by the Fatimids in 1009 and rebuilt in the mid-eleventh century. 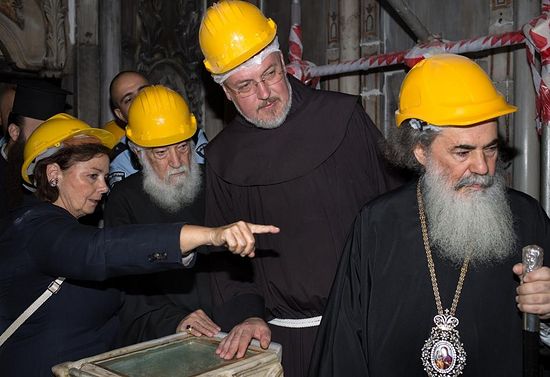 Excavations inside of the Church of the Holy Sepulchre during the 20th century revealed remains of what is believed to be Hadrian's temple and walls from Constantine's original church. Archaeologists also documented an ancient limestone quarry and at least half a dozen other rock-cut tombs, some of which can be seen today. 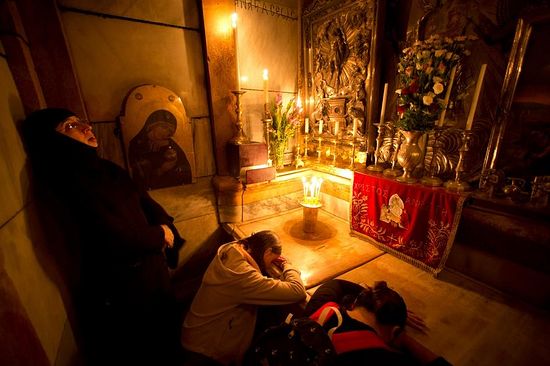 Women pray atop the marble cover of the tomb before it was removed for restoration work. PHOTOGRAPH BY ODED BALILTY, AP FOR NATIONAL GEOGRAPHIC

The presence of other tombs of the period is important archaeological evidence, according to Magness. "What they show is that in fact this area was a Jewish cemetery outside the walls of Jerusalem in the time of Jesus."

According to Dan Bahat, former City Archaeologist of Jerusalem, "We may not be absolutely certain that the site of the Holy Sepulchre Church is the site of Jesus burial, but we certainly have no other site that can lay a claim nearly as weighty, and we really have no reason to reject the authenticity of the site.”

Months of Restoration, Decades of Study

During the past few days, the burial bed has been resealed in its original marble cladding and may not be exposed again for centuries or even millennia. "The architectural conservation which we are implementing is intended to last forever," says Moropoulou. Before it was resealed, however, extensive documentation was performed on the surface of the rock. 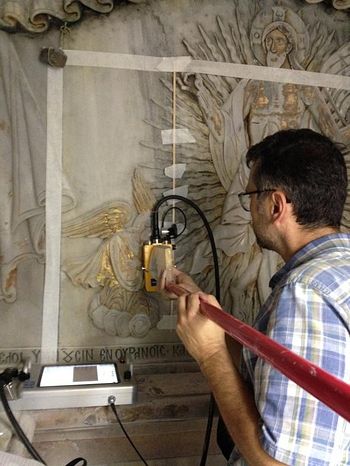 An engineer uses ground-penetrating radar to detect the walls of the original tomb behind its marble facade. PHOTOGRAPH COURTESY JERUSALEM PATRIARCHATE, NATIONAL TECHNICAL UNIVERSITY OF ATHENS

Archaeologist Martin Biddle, who published a seminal study on the history of the tomb in 1999, believes that the only way to really know, or understand why people believe, that the tomb is indeed the one in which the Gospels say Jesus' body was laid, is to carefully review the data collected when the burial bed and cave walls were exposed.

"The surfaces of the rock must be looked at with the greatest care, I mean minutely, for traces of graffiti," Biddle says, citing other tombs in the area that must have been of considerable importance because they are covered with crosses and inscriptions painted and scratched onto the rock surfaces.

"The issue of the graffiti is absolutely crucial,” Biddle says. “We know that there are at least half a dozen other rock-cut tombs below various parts of the church. So why did Bishop Eusebius identify this tomb as the tomb of Christ? He doesn't say, and we don't know. I don't myself think Eusebius got it wrong—he was a very good scholar—so there probably is evidence if only it is looked for."

Meanwhile, the team from the National Technical University of Athens continues its restoration of the Edicule. Conservators will be reinforcing, cleaning, and documenting every inch of the shrine for at least another five months, collecting valuable information that scholars will study for years in an attempt to better understand the origin and history of one of the world's most sacred sites. 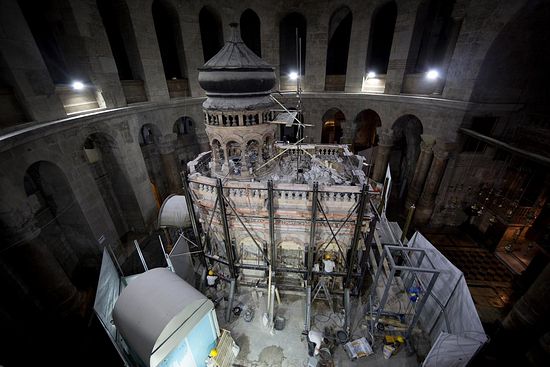 Steel girders supporting the Edicule will be removed when restoration work is completed next Spring. PHOTOGRAPH BY ODED BALILTY, AP FOR NATIONAL GEOGRAPHIC

Archaeologists Identify First Century House Where Jesus May Have Lived
Archeologists in Nazareth say a first century house discovered in the 1880s could be the home of Mary and Joseph where Jesus was brought up.
Comments

VickiB11/25/2016 9:12 am
The author refers to the burial place of Jesus as Golgotha, the place of skulls. Golgotha was where he was crucified, not his burial place.

The Church of the Holy Sepulchre contains both the tomb *and* Golgotha, which is also called Calvary.

It is correct that burial within the city was forbidden. So was execution.

Whether you believe the gospel story or not, it matters that you get information, including names, right.
×