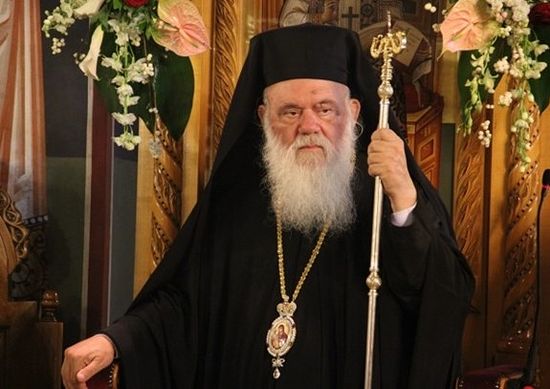 Archbishop Ieronymos of Athens visited the small border island of St. Eustratius. Addressing the locals, the primate of the Greek Church said: “In Brussels they’re continuing to realize their plan of de-Christianizing Europe. We must stay vigilant,” reports Agionorus.ru.

According to the archbishop, “history has shown that when we were united, no one could defeat us. We overcame all difficulties. It’s only all together, supporting one another, that the Greeks have overcome hardships.”

This is not the first time the archbishop has criticized the policies of the European Union. In May 2015 he said: “Our relationship with Europe, spiritual, economic, and other forms of crisis have exhausted and continue to exhaust the Greek people. Poverty, unemployment, insecurity, high costs, and a lack of respect for the human person have the tendency to dominate in our society.

The worst thing is that the echo and sewage of the European Enlightenment has spread everywhere. They repel everything healthy and responsible that still survives in our country.”

According to the archbishop, “language, history, family, the institution of marriage, school, and education are continually being held at gunpoint.”

“Our ‘friends’ in Europe, taking advantage of the difficult economic situation in Greece … will seek by any means to achieve the corruption of Greek society. They will begin with our schools,” Archbishop Ieronymos stressed.

Concluding his speech, he underlined, “The worst is that our enemies are not somewhere far off, but they are already among us. We see it and we feel it.

But if they truly (as they say) have made commitments and developed plans aimed at changing our society—disparaging our history and traditions, destroying the foundation of the family and imposing debauchery, the continued degradation of our language and disdain for our culture, homeland, and holy places—if all of this is part of the demands of the creditors of the Greek government, then we all (hierarchs, clergy, and people) will become a stronghold and fortified walls to withstand this.”

Isidora4/29/2017 3:05 pm
The de-Christianizing began 1,000 years ago when the papal so-called Holy Roman Empire destroyed the Orthodox throughout Europe. Five hundred years later the degradation continued with Protestantism. Luther could have returned the church to Orthodoxy, but instead delivered it to lawlessness. Fast forward another 500 years to the elimination of the Christian monarchs followed by legalized promoted abortion, sodomy, pedophilia and a renewed attack on Orthodoxy as backward and fundamentalist.

Anthony10/31/2016 9:54 pm
''if all of this is part of the demands of the creditors of the Greek government, then we all (hierarchs, clergy, and people) will become a stronghold and fortified walls to withstand this.”

These are empty meaningless words I'm afraid. Greece sold her soul to the devil in brussells, and is reaping the consequences - this is what happens when we turn our hearts to the world and away from God. Same thing happened to Holy Russia - look how she descended into chaos and anarchy for three generations under soviet rule. And is still feeling the consequences today. As St John Maximovich said ''there is a price to pay for sin''. And we are all paying very very dearly indeed.
×