Metropolitan Amfilohije of Montenegro and the Littoral has once again expressed his opinion on the closer relations between NATO and Montenegro. 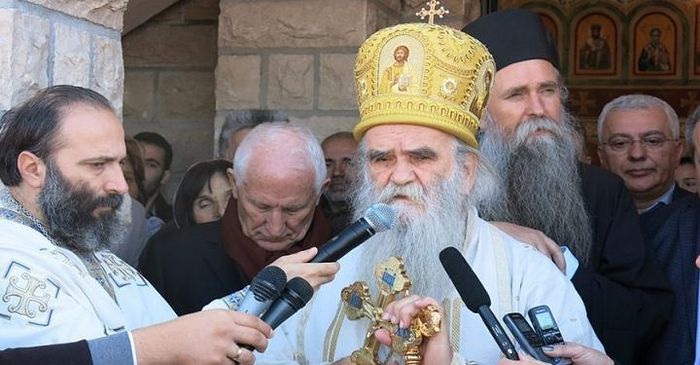 In his speech delivered during the consecration of the church of Hieromartyr Athenogenes and the celebrations dedicated to the 140th anniversary of Battle of Vucji Do, the hierarch shared his position on the current policy of Montenegro and its plans to join NATO.

“The Church of God opposes this NATO. The Serbian Orthodox Church first of all condemns this satanic violence against human beings. The Church is against everything that enslaves and undermines human dignity, both physical and spiritual,” the metropolitan emphasized.

“What is NATO? It is nothing but the continuation of the national fascist ideology which has flooded Europe and the whole world with blood,” Metropolitan Amfilohije said, adding that the Lord came into the world in order to free us from the tyranny which idolizes race, class or state. Bishop Joanikije: for the sake of NATO propaganda the authorities bury victims in oblivion

Bishop Joanikije: for the sake of NATO propaganda the authorities bury victims in oblivion
“These victims represent the whole of Montenegro at the time when the criminal armada was destroying our motherland, and our duty is to remember them. The Montenegrin authorities should commemorate them as well, because these victims are not the Vietnamese, but Montenegrins."

Metropolitan Amphilohije: "NATO bombings are a continuation of fascism"
"European peoples, once Christian, marked the second millennium of their Christian history by these bombings of Holy lands, Christian shrines, especially of Kosovo and Metohija. This is a sign that will be remembered by generations and that will serve as a measure of everything that happened late in the 20th to early 21st centuries," said Metropolitan Amphilohije.
Comments

Anthony11/2/2016 9:36 pm
God bless him. Unfortunately I think we're about to witness mass terror through the NWO Amerikan tool that is NATO as they up the ante against Russia. I reckon we have one maybe two years at the very most before ww3 commences. All prophecies from Orthodox saints are pointing to the times we are now living in with the events we are witnessing
×