A Kerchief for the Saint. Recollection of St. Gabriel (Ugrebadze)

St. Gabriel (Ugrebadze) showed through his life a very elevated example of eldership. He possessed the God-given gift of prophecy. He preached the Lord’s word, sang, danced, wept, laughed, joked, rebuked, forbade, instructed, prayed, again wept, and again laughed… One had to live side-by-side with him for a few months in order to learn how to understand the profundity of his inner world, and not be scandalized by his strange acts of foolishness-for-Christ. In him was a strength before which people bow down even now—the strength of prayer and love.

Today is his commemoration day, and before us is a collection of stories from the life of Elder Gabriel, which are filled with great love, make us smile, and leave us without any doubt that he does not abandon the faithful for a minute and continues in his very original way to work and console us in our very troubled times. 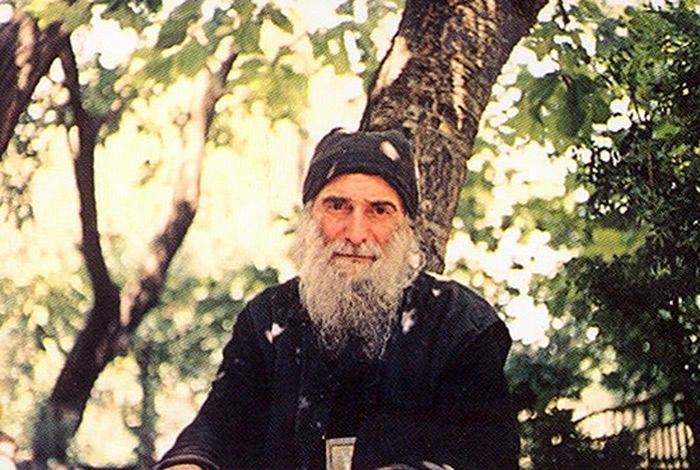 The sisters Nata and Manana recall how they met Fr. Gabriel in the city, were very happy, and wanted to receive his blessing. Because it was a rainy day and they stood before puddles, they could only make a small bow with their heads lowered[1] They had no time to think before Fr. Gabriel plopped down into the puddle and started asking the sisters for a blessing. The sisters had no choice but to follow his example. Blessing them in the puddle, he winked, “One to zero.”

He had such love for God and neighbor that no power could stand before the elder so enlightened with the grace of the Holy Spirit. A clear confirmation of this is the story of how at the May 1[2] celebrations he burned down the portrait of the “soviet leader”.[3] After this he was sent to suffer many tortures, but this did not stop him from trying to light the flame of faith, hope, and love in people’s hearts.

One day he was sitting on Prospect Rustavelli in Tbilisi, with two icons lying next to him and a cross in his hands. He boldly and loudly preached. The militia demanded several times that he cease his preaching, but he as if did not hear them. Nothing worked, so they seated him in the sidecar of a motorcycle and drove him to the local police station. Fr. Gabriel made use of this chance—he stood up to full height in the sidecar and preached with a thundering voice as they drove: “Love our Lord Jesus Christ! Love the life-giving Cross!” The motorcycle was barreling along, and Elder Gabriel’s ryassa was furling like a banner… “What are you doing?” the militia angrily asked him. “You are the ones who have provided me with a ride through the city,” the saint answered. They stopped the motorcycle and said, “Get out, please!”

His gift of clairvoyance was always accompanied by strange acts, or not totally comprehensible but humorous recitations. A spiritual daughter of Elder Gabriel, Ketevan Bekauri, recalls: “Before Nun Parasceva[4] came to the monastery, Elder Gabriel would come out and say, jokingly: “Eh, I’ve grown old… grown old… I’m almost like Robinson Crusoe. I need a Friday… I need a Friday!” And Friday in Georgian [and Greek] is Parasceva. Several weeks passed, and novice Seraphima came to the monastery; she was soon tonsured with the name Parasceva. That is how clairvoyant he was.”

Many did not understand his strange acts, but as years went by they were able to guess what a saintly man they had encountered. He had a peculiar approach to everything. Nun Parasceva recalls: “Once two women came to the elder from Tbiliisi. They talked for a long time, and Fr. Gabriel invited them into his cell. After sitting there for some time, the women asked his permission to smoke, and he nonchalantly granted it. The women calmly began to smoke their cigarettes, when suddenly a nun came to the cell, read the prayer, and asked permission to enter. The women became confused, they were ashamed, and quickly shoved their lit cigarettes into the hands of the elder. So there he sat with two smoking cigarettes in his hands, in his own cell, with two women. When the nun witnessed this scene she stammered with wonder, “What? How? How can this be? Fr. Gabriel, are you really smoking?” The women turned red and couldn’t say a word, while the elder raised his eyebrow, looked at the nun, and said, “Yes, and what of it? When I want, I smoke with my right hand, and when I want, I smoke with my left. What’s so unusual about that?!” The nun excused herself and ran out of the cell. When the two women understood what had taken place they quit smoking! 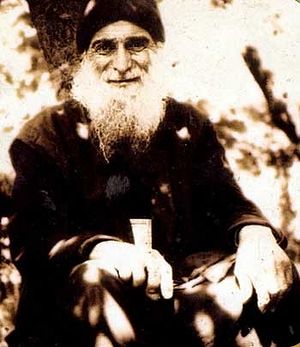 St. Gabriel (Ugrebadze).
When we laughed, Elder Gabriel would come close to us and say, “What are you laughing about here without me? Or have you received a dispatch about your acquisition of the Kingdom of Heaven?” He would say this with a tender smile.

Elder Gabriel’s spiritual children called this smile a “grace-filled smile”. After all, every act, every smile, and every word had saving power. Ketevan Bekauri recalls, “My grandfather died. In Georgia there is a custom: When a person departs this life, his belongings are given away to people. So, we gave away everything, but their remained one completely new handkerchief. It was so pretty that I wanted to give it to Fr. Gabriel. I wanted to, but I didn’t have the courage. It was awkward. “How can I be so bold? How could I give a simple handkerchief to such a venerable elder?!” I thought, and decided not to do it. So, several weeks later I came to Samtavro Monastery and saw Elder Gabriel leaning on the stairway banister, loudly pronouncing the following words: “Everyone, come over here! I want to tell you an interesting story!” Everyone went over to him, and naturally so did I. The elder straightened up and began his story: “You know, I possess enormous theatrical talent. In my youth I acted in the theater. I played the role of Othello! Othello!” Then he suddenly came close to me and said in a sing-song voice, “Desdemona, Desdemona, where is my kerchief, where?!” Everyone laughed, and I froze, immediately understanding what it meant! It became clear to me that he read people’s thoughts!”

"The saint continues his foolishness-for-Christ even after his death,” noted Elder Gabriel’s cell attendant Nun Parasceva in an interview. Leila Sikharulidze, the editor of a Life of Elder Gabriel, The Elder’s Diadem, talks about this. “Finishing my work on the book, I and several of Fr. Gabriel’s spiritual children were sitting in his cell. We joked, remembered various moments in the life of the fool-for-Christ, and involuntarily smiled. I also wanted to say something funny and I joked, 'Well, I’ll finish working on this book and Fr. Gabriel will marry me off (I was seventy at the time)!' Then suddenly Fr. Gabriel winked at me from his photograph. I froze in amazement and couldn’t say a word. Nun Parasceva asked, 'It was the left eye, wasn’t it, Leila?' As it turns out others also noticed this, and one of those sitting with us said, 'That’s nothing! Sometimes he even flicks us on the forehead!'” 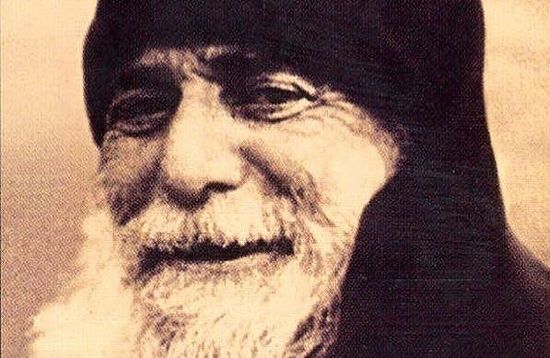 I would like to add a couple of my own recollections that brought me even closer to Fr. Gabriel. We shot a film on Elder Gabriel, which premiered in Moscow in August. We worked on the film exactly one year. I was against it ending in Elder Gabriel’s will and testament. I said that this is a sad motif, and I did not want the film to end on that note. They tried to persuade me but I resisted. Then one day I had a dream: I was sitting when the elder came in and said, “Eh, you, chubby. The will is last. You should change the music and write in Parasceva [Nun Parasceva, the elder’s cell attendant]” I opened my eyes, and Dato Dardjania (the film’s producer) called. And what do you think? It turns out that the elder also appeared to him in a dream and said that the 320-kilogram chubby guy should do such and such. We of course changed the music, and I consented to have his will and testament at the end. Well, and I resigned myself to being called chubby.

I would also like to share a story that happened to me on Christmas night. Services were going on in the Trinity Cathedral, and I was serving with Patriarch Ilya II. At the end of the service I went home. I entered the house, turned on the light, prayed before the icon of the Savior, and went to bed. Despite being very I tired couldn’t sleep; but this insomnia was something special! If in other cases I would feel bad and ache all over, this time it was something completely different! I felt some kind of joy! “No, Kostya,” I said to myself, “get up right now!” I turned on the light. My gaze turned to the center of the room, and I suddenly remembered how I danced five years ago.

I thought, well, everyone expresses their reverence before the Lord in his own way, and all rejoice—some sing, others propose toasts, sit at a laden table (but I didn’t have any sort of laden table, and I don’t know how to sing), and I felt like dancing for the newborn Jesus! So why not turn on the music and dance!

I turned on the Georgian dance called “Adjara” and at four in the morning started dancing and saying to Jesus, “Well, my beloved Christ, all are celebrating You and rejoicing, and I am also rejoicing!” I danced, then came closer to the icons, made a prostration, and went to bed. Soon I had a dream. It was the same situation. I was dancing when suddenly Elder Gabriel came in wearing a ryassa and said, “Well now Kotiko, don’t stop,” and started dancing with me. He danced and joked, and told me that I had gotten too fat, like a “Christmas pig”! I laughed with my full voice! In the morning I woke up and my joy knew no bounds. But the most unpredictable thing was yet to come! When I came home that night I locked the doors and checked them twice, but in the morning they were open, although no one had left, or, naturally, come in. Well, of course except for Elder Gabriel!

[1] Instead of a full prostration to the ground, as they would have wanted to make before the venerable elder.—Trans.

[3] Elder Gabriel set fire to a large portrait of Lenin.

[4] Nun Parasceva would become the elder’s cell attendant until his repose.