Christ in the Old Testament

“… the treasure hid in the Scriptures is Christ, since He was pointed out by means of types and parables.”   (St. Irenaeus of Lyons, Against Heresies and Fragments, Kindle Loc. 6350-51) 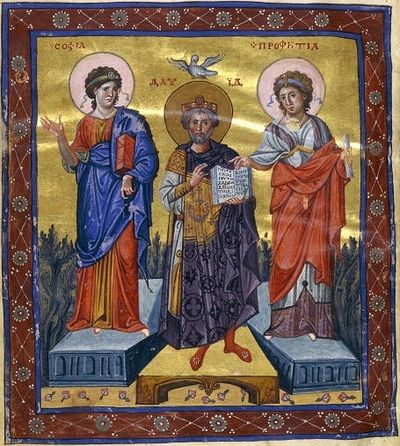 Central to the teachings of Christ is that Moses and the Prophets wrote about Him. We have already encountered this in several of the blog posts in this series.

Jesus said:  “You search the scriptures, because you think that in them you have eternal life; and it is they that bear witness to me; yet you refuse to come to me that you may have life. . . . If you believed Moses, you would believe me, for he wrote of me. But if you do not believe his writings, how will you believe my words?”   (John 5: 39-47)

In this post, we will look at several quotes from St. Irenaeus of Lyons (d. 202AD) and how he applied Christ’s own words to the Scriptures.

“For if ye had believed Moses, ye would also have believed Me; for he wrote of Me;“(John 5:46) [saying this,] no doubt, because the Son of God is implanted everywhere throughout his writings: at one time, indeed, speaking with Abraham, when about to eat with him; at another time with Noah, giving to him the dimensions [of the ark]; at another; inquiring after Adam; at another, bringing down judgment upon the Sodomites; and again, when He becomes visible, and directs Jacob on his journey, and speaks with Moses from the bush. And it would be endless to recount [the occasions] upon which the Son of God is shown forth by Moses. Of the day of His passion, too, he was not ignorant; but foretold Him, after a figurative manner, by the name given to the passover; and at that very festival, which had been proclaimed such a long time previously by Moses, did our Lord suffer, thus fulfilling the passover.”   (St. Irenaeus of Lyons,  Against Heresies and Fragments, Kindle Loc. 5535-41) 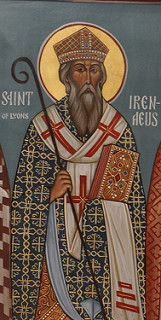 In the above quote, St. Irenaeus shows that in the 2ndCentury Christians believed that the anthropomorphic appearances of God in the Old Testament were actually appearances of the pre-incarnate Christ. It is the Son of God who speaks to Moses from the burning bush and in every occurrence in which Moses spoke with God face to face as a man speaks to a friend (Exodus 33:11). Christ is thus hidden from us in each manifestation of God in the Old Testament if we read the Jewish Scriptures with no knowledge of the Holy Trinity. But in Christ we see in these Old Testament theophanies that Christ is appearing to the saints of the people of God. In Christ we come to realize what these holy men and women are seeing when they encounter God.   The authors of the Old Testament books themselves did not fully understand what they were witnessing, but still they reported these anthropomorphic experiences. In Christ we understand more fully what they were encountering yet couldn’t fully describe. That is why the Old Testament theophanies are not able to fully explain that it was the Word of God who they encountered. Once the incarnation occurs in Christ, we are able to see Christ the Word in the Old Testament texts.

“But since the writings (litera) of Moses are the words of Christ, He does Himself declare to the Jews, as John has recorded in the Gospel: “If ye had believed Moses, ye would have believed Me: for he wrote of Me. But if ye believe not his writings, neither will ye believe My words.” He thus indicates in the clearest manner that the writings of Moses are His words. If, then, [this be the case with regard] to Moses, so also, beyond a doubt, the words of the other prophets are His [words], as I have pointed out. And again, the Lord Himself exhibits Abraham as having said to the rich man, with reference to all those who were still alive: “If they do not obey Moses and the prophets, neither, if any one were to rise from the dead and go to them, will they believe him.”     (St. Irenaeus of Lyons,  Against Heresies and Fragments, Kindle Loc. Loc. 5203-8)

And teaching this very thing, He said to the Jews: “Your father Abraham rejoiced that he should see my day; and he saw it, and was glad” What is intended? “Abraham believed God, and it was imputed unto him for righteousness.” In the first place, [he believed] that He was the maker of heaven and earth, the only God; and in the next place, that He would make his seed as the stars of heaven. This is what is meant by Paul, [when he says,] “as lights in the world.”Righteously, therefore, having left his earthly kindred, he followed the Word of God, walking as a pilgrim with the Word, that he might [afterwards] have his abode with the Word. Righteously also the apostles, being of the race of Abraham, left the ship and their father, and followed the Word. Righteously also do we, possessing the same faith as Abraham, and taking up the cross as Isaac did the wood? follow Him. For in Abraham man had learned beforehand, and had been accustomed to follow the Word of God. For Abraham, according to his faith, followed the command of the Word of God, and with a ready mind delivered up, as a sacrifice to God, his only- begotten and beloved son, in order that God also might be pleased to offer up for all his seed His own beloved and only-begotten Son, as a sacrifice for our redemption.     (St. Irenaeus of Lyons,  Against Heresies and Fragments, Kindle Loc. 5320-29)

Every encounter with the Word of God by the holy men and women of the Old Testament is thus an encounter with Christ. And each encounter with Christ is also a revelation of God the Father, even as Jesus said: “He who has seen me has seen the Father; how can you say, ‘Show us the Father’? Do you not believe that I am in the Father and the Father in me?” (John 14:9-10). Each theophany in the Old Testament was thus really an encounter with the pre-incarnate Word of God, but each encounter also revealed the Father to all. For Christ is the image of the Father.  “He is the image of the invisible God, the first-born of all creation; for in him all things were created, in heaven and on earth, visible and invisible, whether thrones or dominions or principalities or authorities—all things were created through him and for him” (Colossians 1:15-16).

Fr. St. Irenaeus, Christ is now obvious in the Old Testament texts. He reads the Torah (Pentateuch) as a typology and preparation for the coming of Jesus the Christ. Joshua, the protégé of Moses, shares the same name as Jesus in the Old Testament. Thus everything Joshua does prefigures Christ and is thus prophecy.

“Take unto you Joshua (᾿Ιησοῦν) the son of Nun.”(Numbers 27:18) For it was proper that Moses should lead the people out of Egypt, but that Jesus (Joshua) should lead them into the inheritance. Also that Moses, as was the case with the law, should cease to be, but that Joshua (᾿Ιησοῦν), as the word, and no untrue type of the Word made flesh (ἐνυποστάτου), should be a preacher to the people. Then again, [it was fit] that Moses should give manna as food to the fathers, but Joshua wheat; as the first-fruits of life, a type of the body of Christ, as also the Scripture declares that the manna of the Lord ceased when the people had eaten wheat from the land.(Joshua 5:12)”    (St. Irenaeus of Lyons,  Against Heresies and Fragments, Kindle Loc. 9079-89)

“For every prophecy, before its fulfilment, is to men [full of] enigmas and ambiguities. But when the time has arrived, and the prediction has come to pass, then the prophecies have a clear and certain exposition. And for this reason, indeed, when at this present time the law is read to the Jews, it is like a fable; for they do not possess the explanation of all things pertaining to the advent of the Son of God, which took place in human nature; but when it is read by the Christians, it is a treasure, hid indeed in a field, but brought to light by the cross of Christ, and explained, both enriching the understanding of men, and showing forth the wisdom of God and declaring His dispensations with regard to man, and forming the kingdom of Christ beforehand… ”   (St. Irenaeus of Lyons, Against Heresies and Fragments, Kindle Loc. 6354-59) The God of the Old Testament
Fr. Lawrence Farley

The God of the Old Testament
Fr. Lawrence Farley
I understand some of this denunciation of the Most High on online forums and the like—some people are simply angry at Christianity and happily use any stick with which to beat Christians. They take some Old Testament verses out of their literary context and entirely out of their cultural context and start shouting. What is more perplexing to me is finding some Christians arguing that the Old Testament deity is insufficiently Christ-like. I expect the unbelievers to throw large chunks of the Bible angrily across the room. But I expected believers to be more respectful of what is for them, after all, Holy Writ.