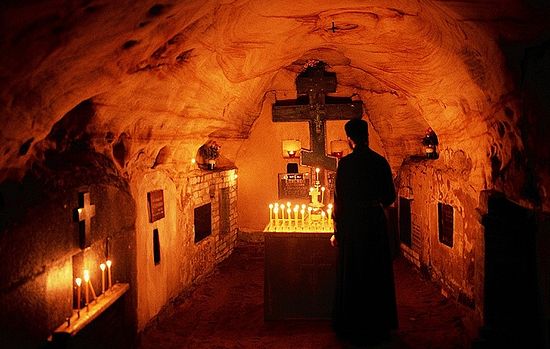 Medieval Russia went through very hard times in the 11th-13th centuries. Because of the internecine strife among the Russian princes who had divided the land into petty principalities, Russia was so weakened that when it was attacked by the Tatars it could not resist and was conquered by the infidels. For more than 200 years the Russian people were ruled by the Tatars and paid tribute to their khans. But the time came when the Russians decided to rid themselves of the harsh Tatar yoke. When the Tatar khan Mamai found out about this, he gathered all his Tatar forces and also invited the Lithuanian King Yagailo to join him. He decided to erase the Russian people from the face of the earth and to convert Orthodox churches into Moslem mosques. But the Lord did not allow the evil intentions of the infidels to materialize. At that time the Great Prince of Moscow was Dmitri Ioannovich. Not relying only upon his own forces, he asked for help from the divine saint, Sergius of Radonezh. St. Sergius blessed the prince and foretold his victory.

Placing his faith totally in the help of God, Prince Dmitri Ioannovich moved with his forces against the Tatars. A decisive battle took place in the Kulikovo field near the Don River. The Tatars were roundly defeated. Mamai himself fled with a few surviving warriors. This took place in 1380. Prince Dimitri vanquished his enemy at the expense of losing more than half of his army,

Prince Dmitri Ioannovich commemorated his dead warriors in the Holy Trinity Monastery of St. Sergius, and decreed that a similar commemoration be held annually on the Saturday before October 26th (the feast day of St. Demetrios). Later the Church began to commemorate on this day not only all those who had fallen on the battlefield, but all Orthodox Christians.

The Tatar yoke over Russia lasted for 200 years, and this battle was the turning point after which Russia began its liberation from the power of the Tatars. A description of the battle was retained in ancient monastic chronicles.

On September 6th the Russian host approached the Don River, and the princes and boyars began to discuss whether they should wait there for the Tatars or go on further. Opinions were divided, but Prince Dimitri was for advancing. “I did not come here to watch over the Don River, but to deliver the Russian land from captivity. It would be better for us not to go out against the Tatars, than to come, accomplish nothing, and go back. Today we will cross the Don, and we will either be victorious, or we will give up our lives for the holy Church and for our brothers.” That same day Prince Dimitri received a message from St. Sergius of Radonezh, blessing him for the battle and advising him not to lose time. 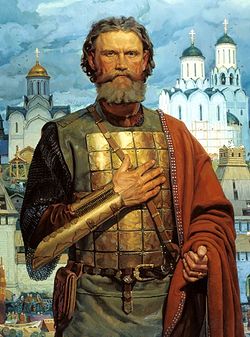 On September 7th Prince Dimitri ordered his troops to find a good place for the cavalry to ford the river and to throw over bridges for the infantry to cross. On the following morning there was dense fog, but it soon cleared up, and the troops crossed the Don. The Russian regiments stood in a long line seven miles across, so that its ends abutted against places that were inaccessible to the enemy—gullies and swamps. In the middle of the line stood the main regiment with Prince Dimitri’s company, guarding his red banner with a golden image of the Saviour. On the left flank a reserve regiment under the command of Prince Vladimir was hidden within the woods.

Standing upon a tall hill, seeing the orderly rows of troops, the banners streaming in the wind, the glitter of weapons in the sun, and knowing that many thousands of these warriors would be killed, Dimitri began to fervently pray before the icon of the Saviour. Afterwards he rode through all the regiments and spoke with the warriors, calling them his loyal comrades and beloved brothers, and promising them honorable memory in the world and martyric crowns in heaven.

On September 8th, on the day of the feast of the Nativity of the Holy Theotokos, the Russian host met with the hordes of Khan Mamai on a large field called Kulikovo. Commanders on both sides watched each other and slowly advanced. There were many more Tatars than Russians. The boyars pleaded with Dimitri to stay behind the main army, but Dimitri replied: “Where you will be, so shall I. If I hide in the back, how can I exhort you: brothers, let us die for the homeland”? He took off his gold-threaded cape, kissed the cross, ate the holy bread sent to him by St. Sergius, and went into battle.

The battle began with single combat. St. Sergius had sent off with Prince Dimitri two of his monastics, former warriors, Peresvet and Oslyabya. When a huge warrior by the name of Chelibeizi rode out from the Tatar side and began to call the Russians out to combat, Peresvet galloped out of the ranks and rode hard at him. They struck each other with such force that both fell down. Then Prince Dimitri went at the Tatars, loudly reciting the psalm “God is our refuge and strength.”

The fierce battle spread over seven miles. The ranks became mixed up. First the Russians drove back the Tatars, then the Tatars drove back the Russians. Almost the entire Russian front regiment was destroyed. The Tatars began to advance upon the center and managed to undercut the wooden staff holding the Russian banner, but the Russians were able to recapture it. Then the Tatars decided to break through the Russian lines and struck with all their forces at the right flank. The main regiment in the middle of the Russian line was in danger of being outflanked. It was at this point that Prince Vladimir ordered his reserve regiment to come out of the woods and attack the Tatars. This unexpected blow decided the fate of the battle. The Tatars were unable to withstand the new and fresh host, and Mamai saw his troops fleeing. Tradition holds it that he himself joined his fleeing warriors with the words: “Great is the Christian God!” Prince Vladimir then stood on the battlefield under the princely banner and ordered the trumpets to sound the battle cry of victory. Princes and commanders began to join him from all sides, but Dimitri was nowhere to be seen. Vladimir asked everyone about the whereabouts of his brother, but no one could answer him. They began to look for Dimitri, dead or alive, all over the battlefield and for a long time were unable to find him, but finally two warriors saw him lying under a tree. Having been stunned by a powerful blow, he fell from his horse and lost consciousness. Coming to his senses and seeing joyous faces all around him, Prince Dimitri gave fervent thanks to God and then, getting up on his horse, slowly rode over the entire battlefield, on which lay up to 200,000 Russian and Tatar warriors. Among the dead were many princes and both the monks sent by St. Sergius. In accordance with Prince Dimitri’s wishes, the Russian Church established a commemoration of all warriors killed at the Kulikovo battlefield to be held on St. Demetrios Saturday – the last Saturday before the feast day of the holy martyr-warrior St. Demetrios of Thessalonika on October 26th.

The Tatar yoke did not end with the Russian victory on the Kulikovo battlefield and continued for another 100 years, but the power of the Tatar hordes was broken, and the Russian people came to realize that with God’s help they could vanquish the Tatars. Such was the ancient miracle of September 8, 1380.

(Condensed version of the Battle of Kulikovo according to historian Karamzin) Why are the Dead Commemorated on Saturdays?
Hieromonk Job (Gumerov)

Why are the Dead Commemorated on Saturdays?
Hieromonk Job (Gumerov)
The Saturdays of commemorations of the dead are called ancestral Saturdays (the first universal commemoration on Meat Fare Saturday, the second, third, and fourth Saturdays of Great Lent, Trinity Saturday, and St. Demetrius Saturday). Why do these take place specifically on Saturdays? What are the historical roots of this tradition? They were not all instituted at the same time. I Look for the Resurrection of the Dead, and the Life of the Age to Come
St. John of Shanghai

I Look for the Resurrection of the Dead, and the Life of the Age to Come
St. John of Shanghai
Our grief for our loved ones who have died should be inconsolable and boundless, had the Lord not given us eternal life. Our life would be senseless if it ended in death. What benefit would there be from virtue, or from good deeds? Then they would be right who say, “Let us eat, drink, and be merry, for tomorrow we die!”
Comments
×