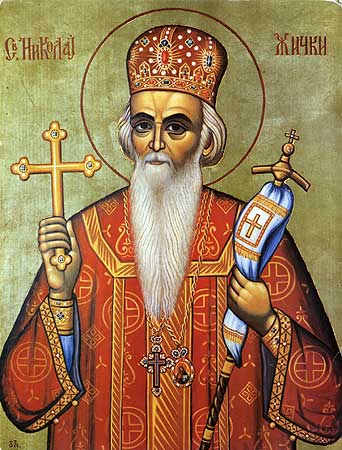 The episcopate of the Serbian Orthodox Church has published on the official site of the Serbian Patriarchate a communique concerning statements of the Roman Catholic archbishop of Belgrade Stanislav Hočevar containing offensive comments on one of the most notable and revered Serbian saints of the twentieth century—St. Nikolai (Velimirovich):

“Communique of the Holy Synod of Bishops of the Serbian Orthodox Church regarding the statements of the Roman Catholic archbishop of Belgrade Stanislav Hočevar:

Sharing together with all Serbian Orthodox people, as well as other Orthodox and even many non-Orthodox Christians throughout the whole world the deepest prayerful veneration for the person of the holy bishop of Žiča and Ohrid Nikolai (Velimirovich), the Holy Synod of Bishops of the Serbian Orthodox Church considers it its duty to express publicly its outrage at the inappropriate and ill-intentioned statements of the archbishop of Belgrade Stanislav Hočevar given to the Belgrade newspaper Politika on October 28 of this year, having the nerve, in accordance with criteria known to him alone, to question the sanctity of the New Chrysostom and even compare him with Cardinal Stepinac and deem him the Serbian equivalent to Stepinac.

Unlike the archbishop of Canterbury Justin Welby, who in the London cathedral of St. Paul, together with Serbian patriarch Irinej not long ago festively celebrated the one-hundredth anniversary of St. Nikolai’s historical speech, the archbishop of Belgrade considers it necessary to know neither the pastoral and spiritual work of the hierarch in Ohrid, Bitola, and Žiča, nor of his multifaceted interchurch activities. He especially does not consider it necessary to take an interest in his theological and literary output, including A Century on Love, and his experience of perceiving his enemy as an “austere friend,” as opposed to Stepinac, who wrote that the “Byzantine Orthodox” are “the curse of Europe,” and that, therefore, Croats and Serbs are two incompatible worlds. He also considers it unnecessary to know that, as opposed to Stepinac, Archbishop Nikolai was interred throughout the entire Second World War in Ljubotina, Vojlovica, and, finally, in the notorious Dacha concentration camp. We do not deny his right to question the decision of the head of his own chuch, Pope Francis, to form a joint commission of the Croatian episcopal conference and the Serbian Orthodox Church to responsibly and truthfully consider the question of the role of Aloysius Stepinac, before, during, and after the Second World War.

The Holy Synod of Bishops, however, does deny his right to use the visit of the Pope to Serbia as a bargaining chip in the unconscious, and perhaps, even conscious attempt to botch relations between the Serbian Orthodox Church and the Holy See. But in this, we are sure that he will not succeed.

From the President of the Holy Synod of Bishops, Bishop Irinej of Backa, press secretary of the Serbian Orthodox Church” The Final Years of St. Nikolai Velimirovich
Bishop Nikolai's classes, sermons and conversations were always geared to his audience, whether they be students, professors, theologians or simple parishioners, and his vocabulary never extended itself beyond the comprehension of his hearers. For him, class could be any time. Anything said to him could be turned around and assigned a deeper meaning. He would always take examples from conversations in class, at the dinner table, or that which occurred as he walked about the grounds, and would always introduce examples from Holy Scripture, relating them to life at hand.