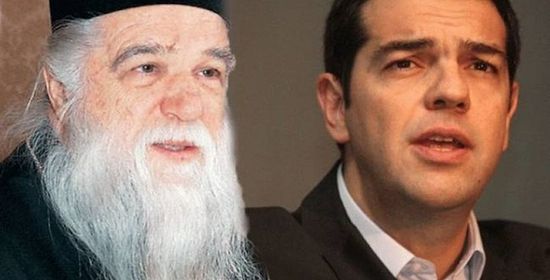 Metropolitan Ambrose of Kalavryta and Aigialeia wrote on Thursday an open letter to Prime Minister Tsipras, condemning him for comparing the 1821 Greek Revolution with the 1959 Cuban Civil War, which he called a national crime and shame, simultaneously criticizing the extravagance of the Prime Minister’s “unnecessary” trip to Cuba, reports Russian Athens. (According to the presidential palace, the Prime Minister’s Cuba trip cost 22,900 euros, but according to the newspaper Ta Nea it was no less than $300,000.)

In particular, he writes: “As reported by the mass media, you said the following blasphemous words: ‘Freedom or death was the slogan of the Greek Revolution of 1821. Patria o muerte [Motherland or death] was the slogan of the Cuban Revolution of 1959.’ In other words, you equated the 1821 Greek Revolution with its nearly 400-year slavery befallen our ancestors at the hands of the Turkish invaders, with the Cuban Revolution which was an internal, Communist revolution of a few Cuban Communists and their leader Fidel Castro against Batista, the president of the country, and their Cuban compatriots.”

The metropolitan characterized Tsipras’ laudatory Cuban speech as criminally inappropriate, then as if in address to Comandante Fidel Castro, among other things noted that he “was known for his amorality, considering that he erotically ‘cuddled’ several hundred women.”

Finishing his letter, Metropolitan Ambrose upbraided himself for greeting Tsipras at the time of his oath with the words: “Hello, wonderful young Prime Minister.” Metropolitan Amvrosios of Kalavryta and Aigialeia: “The EU is a union of atheists and deceivers”

Metropolitan Amvrosios of Kalavryta and Aigialeia: “The EU is a union of atheists and deceivers”
Metropolitan Amvrosios has stressed that the external forces, “allied with mendacious Greek politicians who obey them, have put Greece on the verge of disaster”. He has characterized “the godless occupiers who lost the fear of God” as “instruments in the hands of the antichrist who are working hard in order to separate people from God”.

Metropolitan Ambrose of Kalavryta: Through immigrants the powers that be are seeking to change the identity of Greece
Let us not receive immigrants on the Peloponnese! Let us keep our national identity intact and free from contamination. Let us defend the Orthodox faith and our tradition. Let us defend our language and culture.
Comments

Stephen Caldis12/5/2017 7:01 am
Father is absolutely correct. Tsipras is immature and ignorant. He lives on his fathers inheritance and does not know what hard work is or to go without. He is a disgrace to Greece.

ChiRho12/7/2016 7:12 pm
Greece is blessed to have Metropolitan Ambrose who seems so willing to speak the truth. I hope the Greeks are listening.

carla vites12/6/2016 4:43 pm
Happy to hear some Christian at least is not fearing to say the Truth!
In our Catholic Church that-by now-is a mere dream....
Let pray to us
Carla