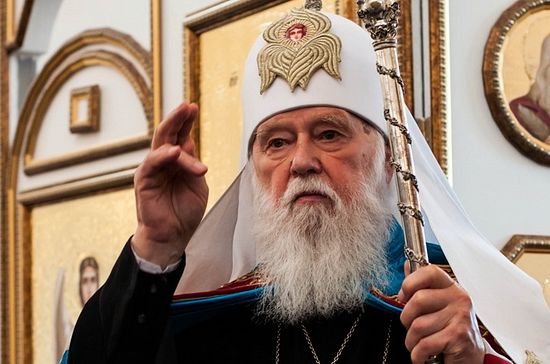 The pseudo-Kievan mayor asked how to work out an agreement for Philaret to give his blessing for the official opening of Eurovision 2017 to take place in St. Sophia’s Cathedral. The head of the “Kievan Patriarchate” revealed the desire to take several rooms of the St. Michael’s Monastery under his control.

After “Klichko” promised to assist in evicting the Ukrainian Orthodox Autocephalous Church, Philaret agreed to bless all viewers of the official Eurovision 2017 opening from the stage, apparently not bothered that Conchita Wurst will be co-host.

The conversation was conducted in Russian. A monastery is closed in Poland for concelebrating with schismatics from “the Kyiv Patriarchate”
A monastery has been closed at the Przemysl Diocese of the Polish Orthodox Church by decision of its Holy Synod because of its clergy’s concelebration with representatives of the so-called “Kyiv Patriarchate.” The abbot has been suspended.
Comments

Alfie12/12/2016 2:11 am
Au contrair. It merely adds the the other confirmations of Filaret's stupidity and the selling out of Orthodoxy to ZOG

Roman12/9/2016 2:42 pm
I thought this was a reputable source of Orthodox news, but it seems to enjoy engaging in "yellow journalism". Is this article religious news? Does it convey objective truth? Does it give you satisfaction to report something scandalous and mean about someone else, in this case, Patriarch Filaret? And this during the Christmas Fast, when we should be seeking the good in others. I would suggest you remove this objectionable and despicable "scandla-report" from your website and refrain from posting similar items in the future.
×