An explosion at Cairo's Coptic Orthodox cathedral complex Sunday has killed at least 25 people and wounded nearly 50 others. 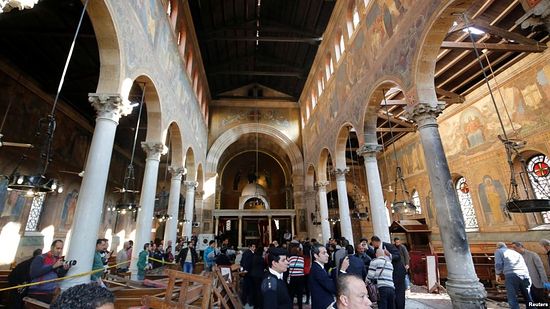 There has been no claim of responsibility for the attack.

A VOA reporter at the scene said the attack happened during the 10 a.m. service Sunday in an area with mostly women. 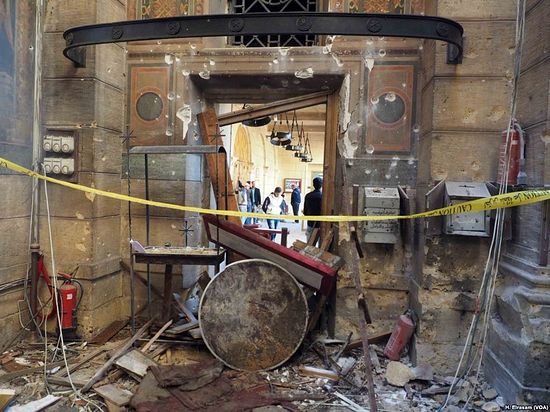 Scene after the explosion inside the “Botrosia” church in Abbassya in Cairo, Egypt, Dec. 11, 2016.

Video posted to social media showed pools of blood beneath debris inside the church of St. Peter and St. Paul, known in Arabic as El-Botroseya.

Egypt's President Abdel-Fattah el-Sissi declared a three-day state of mourning after the blast. 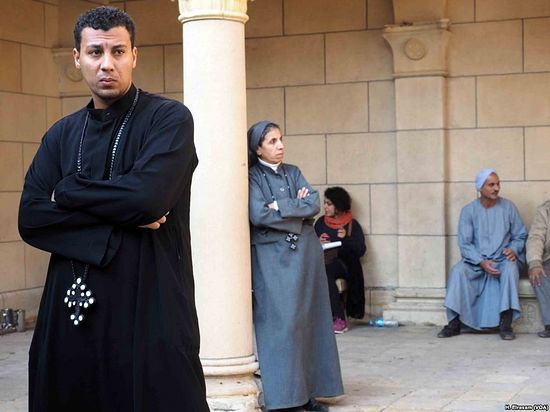 Priests, nuns and some of copts, who were attending the mass, are looking inside the “Botrosia” church in the cathedral complex following the blast in Abbasssya in Cairo, Dec. 11, 2016.

"The pain felt by Egyptians now will not go to waste, but will result in an uncompromising decisiveness to hunt down and bring to trial whoever helped through inciting, facilitating, participating or executing this heinous crime,'' a presidential statement quoted the Egyptian leader as saying.

More than 500 Coptic protesters gathered at the scene of the explosion, deriding the government and calling for the president to step down. The demonstration prompted small skirmishes with police until a priest called for calm. Dozens of Muslim supporters joined the Christian protesters.

The attack came two days after a bomb elsewhere in Cairo killed six policemen, an assault claimed by a group authorities link to the outlawed Muslim Brotherhood.

St. Marks is the seat of Egypt's Orthodox Christian church and home to the office of its spiritual leader, Pope Tawadros II, who is currently visiting Greece. 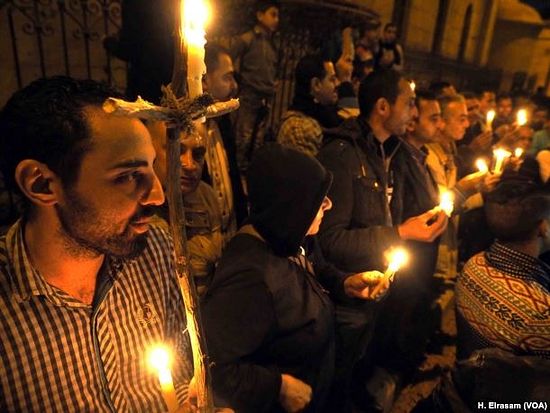 Egyptian Copts seen lighting candles during a vigil in front of the "Botrosia" church, 35 were announced injured in Abbassya as they attended a vigil in Cairo, Dec. 11, 2016.

Egyptian Copts seen lighting candles during a vigil in front of the "Botrosia" church, 35 were announced injured in Abbassya as they attended a vigil in Cairo, Dec. 11, 2016.

Human rights groups and the media have regularly documented cases of anti-Christian violence in the country, including a 2011 attack on New Year's Day at a Coptic church in Alexandria that killed 20 people.

Copts make up about 10 percent of Egypt's population of 93 million. Coptic monastery threatened by Islamic extremists in Egypt
The Coptic Orthodox Monastery of al Baramos, also known as the Paromeos Monastery, was threatened by jihadists online.

Egypt: Muslim Brotherhood supporters attack church, four dead
Four people were killed in the attack on the church, dedicated to the Virgin Mary and Archangel Michael. Among the dead are a 25-year-old journalist and a Coptic Christian worshipper.
Comments
×