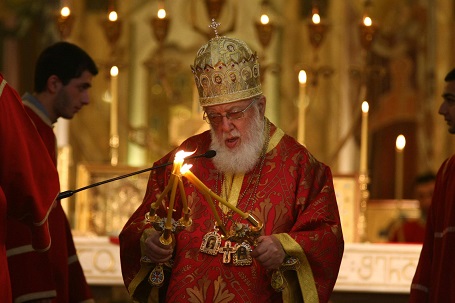 Patriarch-Catholicos Ilia II of Tbilisi and All Georgia’s health is generally improving following a flu brought on by a gall bladder inflammation, reports Sedmitza.

“I have no right to speak about the concrete clinical details, but I can confirm that the general condition of heath of the primate of the Georgian Orthodox Church Ilia II is improving, although not all risks have been removed,” says the Georgian Minister of Health David Sergeenko.

Initially the patriarch was advised to go to Germany for a possible surgery, in the event that the inflammation did not die down, but he declined, according to Interfax-Religion.

Instead, the German expert who cared for Patriarch Ilia over the past two years during his planned procedures in one of the best clinics in Berlin arrived in Georgia to personally examine the bishop. Chief Physician of surgery at the Helios Berlin-Buch clinic Martin Shtrik has stated that at this point he sees no need for surgery in Patriarch Ilia’s case.

According to his personal physician Tsisana Shartava, Vladyka’s health is stable and he is resting in his home under surgeon supervision, with daily exmainations.

“The patriarch feels good, and his treatment is working, according to many indicators,” Shartava stated. Patriarch Ilia to celebrate 47th mass baptism
Patriarch Ilia has been the beloved leader of the Georgian Orthodox Church since the 1970s and is perhaps the most trusted public figure in the ancient Orthodox nation. Many parents have been overjoyed to have children and entrust them to the spiritual care of their pious archpastor. Georgia’s Catholicos-Patriarch Ilia II turns 83
He is a descendant of the influential eastern Georgian mountainous clan with family ties with the former royal dynasty of Georgia - Bagrationi. In 1967 he was consecrated as the bishop of Tskhumi and Abkhazeti, and was elevated to the rank of metropolitan in 1969. Georgian Patriarch successfully operated on in Germany
Catholicos-Patriarch Ilia II of All Georgia, who is currently undergoing another course of medical treatment in Germany, has been operated on.
Comments
×