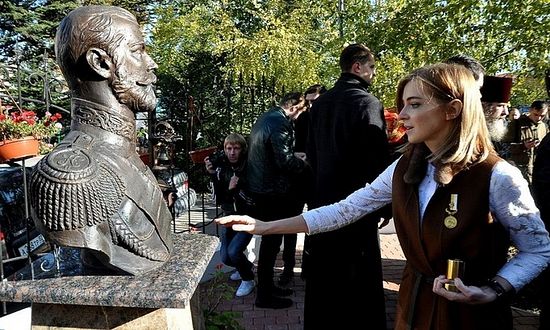 Deputy of the State Duma of Russia and a former Prosecutor General of the Republic of Crimea Natalia Poklonskaya and local church warden of the chapel of the Holy Royal Martyrs in Simferopol have reported about a myrrh-streaming bust of Tsar Nicholas II at the parish, reports pravoslavie.fm.

Chapel warden Alexei has stated that “Natalia Vladimirovna saw the first myrrh-streaming, and I also looked but did not attach any importance to it... Then a parishioner told us that something is happening with the bust. We decided to look closer and we saw that it was the grace of God—myrrh. The rain passed and it turned out that the whole bust was covered in myrrh. Generally it’s a sign. After all, we have myrrh-streaming icons: the first myrrh-streaming icon of the Royal Family, then the Vladimir Icon of the Mother of God, the Kazan Icon of the Mother of God, and others.”

On the morning of February 22, at 6:30 AM, Alexei went to the chapel as usual to pray, and while reciting the Creed he noticed that there were drops on the face of the Kazan Mother of God Icon. Others noticed it as well. It then turned out that other icons were streaming as well. Then on March 3, the warden noticed an unusual shine on the bust after a rain, finding droplets of a very different consistency from rain water, like resin that was very difficult to separate and collect.

According to Poklonskaya, people have already come to the bust with their children, looking for healing. The Russian Orthodox Church has not made any official statement on the occurrence either way. Protopresbyter Serafim Gascoigne3/6/2017 10:54 pm
Glory be to God! We have a great intercessor before the Throne of God.
×