A Church of God Can Never Be Empty. How Abbot Nazarius of Valaam Saved a Parish 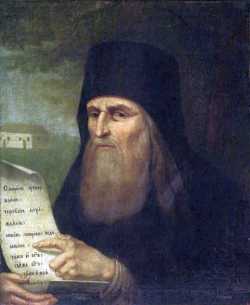 The following excerpt is from the Life of Abbot Nazarius of Valaam and Sarov, which was compiled and translated by Hieromonk Seraphim (Rose) of blessed memory from material published in the late 19th century by Valaam and Sarov Monasteries. The full life, along with the soul-profiting instructions of the spiritual elder who instructed both St. Herman of Alaska and St. Seraphim of Sarov can be found in Little Russian Philokalia, Vol. II: Abbot Nazarius (Platina: St. Herman of Alaska Brotherhood) 1983.

Originally from Sarov Monastery, where he reached a high degree of spiritual discernment and became a spiritual father to the monks, Elder Nazarius was called to Valaam Monastery to revive the monastic life there. He received Valaam in 1782 with only one tonsured monk and a few novices, and retired from the abbacy after nineteen years, leaving a flourishing monastery with a large, strong brotherhood and newly-established hermitages. Monks even came to Valaam from Mt. Athos to be near the holy abbot. Longing for his beloved Sarov, Abbot Nazarius departed Valaam—saving more souls along the road… 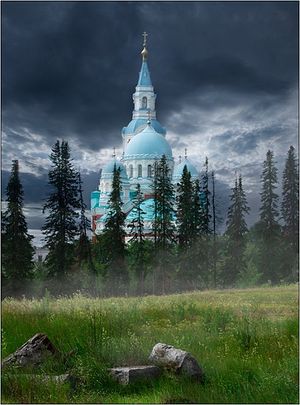 Valaam. Photo: Liveinternet.ru
In 1801, having earned well a rest from the heavy burden of governing the monastery, Fr. Nazarius retired for a life of solitude and divine vision a mile inland from the monastery. While he was still abbot he had had a cell built for him, where he occasionally would retire in silence. But his love for Sarov Monastery, the place where he had laid his ascetic beginnings and given his monastic vows, kept summoning him to return there. So, after three years of seclusion in Valaam, he decided to retire to Sarov. He took with him his disciple, Fr. Ilarion, bade farewell to Valaam, and crossed the waters of Ladoga. At one of the rest halts the following incident occurred, which vividly illustrates the power of Fr. Nazarius’ Orthodoxy in practice.

Having come on a Saturday to a certain village in a small cart with their own horse, they asked lodging at the priest’s house. The priest gladly received the travellers, and after conversing with Fr. Nazarius he came to have great respect for him. The time came for the All-night Vigil before Sunday. But Fr. Nazarius noticed that the priest was not making preparations to serve the Vigil, and he asked him: “Batushka, do you then have the Sunday Vigil in the morning?” The priest replied that he very rarely served and had no intention to serve even the next morning. “Although my parish is large and there are no schismatics, still, none of the peasants come to church on feast days. They gather only for amusements in the churchyard. They don’t even take a look inside the church. The church is always empty. To such an extent have they grown cold toward the Church, and because of them I have grown lazy, thinking: when they don’t come to church, there is no one to celebrate the service for.”

Fr. Nazarius remarked to the priest that he was severely mistaken, and that this was a temptation from the enemy of our salvation. “If your parishioners do not fulfill their most important obligation, nonetheless you, being a pastor, should fulfill your own obligations without fail. A church of God can never be empty. From the time of the church’s consecration, there is in it the guardian of the Lord’s Altar, an angel; and what is more, even if your parishioners do not come to the Divine services that you celebrate, the church will always be filled with angels, the guardians of their souls. For at every Divine service, in their flaming love toward their God, the angels of God are the first ones who both concelebrate and attend with hymns of praise. And it is they who would fill your church while you serve. When you yourself zealously fulfill your obligations for the salvation of your own soul, and if you would pray for your flock that the Lord would warm their hearts and convert them to repentance and prayer—then the Lord, for the sake of your prayers, would command their guardian angels to approach their souls and arouse them to prayer and instill in them zeal for the Divine services which you celebrate in the holy temple, where you offer for them the sacrifice of mercy before the Lord in the Divine Eucharist. And what answer will you make in the day of the Lord’s terrible Judgment for the doom of your own flock, when you on your side use no means for their conversion and salvation?”

Touched to the heart by the just words of Fr. Nazarius, the priest replied: “Help me, О Elder, and instruct me. I will try to do what you advise.” Fr. Nazarius said: “Very well; now let us go to God’s temple. Order the bell to be sounded for the Vigil and the Reader to prepare for the All- night service. And Fr. Ilarion and I will help you.” 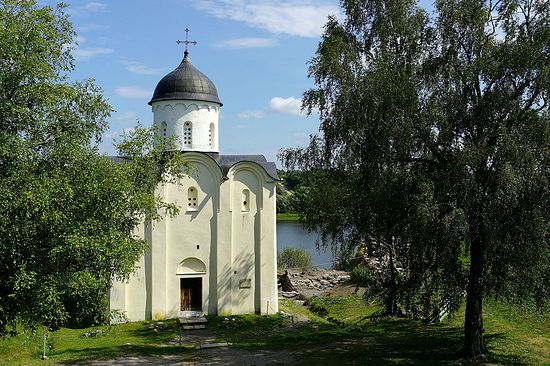 The bell was sounded for the Vigil and the service began. And indeed, in the beginning there was no one in church. Then no more than ten people gathered in church, old men and women. Fr. Nazarius read the Six Psalms, and Fr. Ilarion the Kathismata. After the reading of the Gospel, it was brought out to the middle of the church. Fr. Nazarius and Fr. Ilarion went to reverence and kiss it, but those present, out of habit, did not do so. The Elder went up to them and explained to them concerning the benefit of the sanctification to be received at this moment from venerating the Holy Gospel. And the old people came, kissed the Gospel, and thanked the Elder. Father Nazarius spoke with them and advised them to tell those at home and their neighbors how profitable it is to participate in the Divine services and be sanctified by venerating and kissing the Holy Gospel as well as other holy objects in church.

After the Sixth Song of the Canon Fr. Nazarius read from the spiritual instructions of the Prologue. Several of the old people managed to go home and call their own people to church, until some thirty people had gathered. As the people left the church, the Elder spoke with them on the necessity and benefit of praying in God’s temple.

In the morning the priest celebrated the Divine Liturgy, and Father Nazarius, at the time of the sermon, read from a book of spiritual instruction; rather more people were in attendance at the Liturgy than had come to the Vigil. Having rested after dinner, the Elder saw that many people had gathered in the yard around the church, and the priest explained that on all holy days the people gather for their own amusement. “Let us go too,” said Fr. Nazarius to the priest. “Take the book of the Lives of Saints.” Having chosen a convenient place near the church, they sat down, and the Elder had the priest read out loud the Life of the saint commemorated that day. The old people were glad to see Fr. Nazarius after having made his acquaintance the night before, and were the first to go to him. He persuaded them to sit down and listen to the Life of the saint. Once in a while he stopped the reading and himself gave instructive comments. The number of listeners increased, and Fr. Nazarius rejoiced with his whole heart that Orthodox people had been awakened to listen to spiritual converse.

The next day was the Feast of the Tikhvin Icon of the Mother of God, and the priest, at the advice of the Elder, celebrated both the All-night Vigil and the Liturgy, as he did also on all the succeeding feast days. The parishioners showed their evident disposition toward prayer, their number at the church’s Divine services increasing from day to day. Fr. Nazarius, persuaded by the priest, spent more than two weeks there, not omitting a single opportunity of conversing with and instructing in true Christian piety both the peasants of this village and those who came to the Elder from neighboring places to take advantage of his instruction; and everyone came to have a heartfelt love for him. The priest, having become his spiritual son, fulfilled his counsels with all zeal, and he saw in Fr. Nazarius a God-sent tool both for his own salvation and for that of his flock. The Elder, bidding farewell to the priest and the parishioners, went on his way.

Some time later, after some deviations in their route, the travellers decided to pass through that village again and without fail to visit the priest; and it so happened that they came to the village while the bells were ringing for the Liturgy on Sunday morning. The people, gathered in large numbers at the church, saw the approaching Elder and almost took him from his cart and carried him into the church. The priest, gladdened by his arrival, was serving the Proskomedia. With tears the Elder thanked the Lord for such a grace-filled change, noting that the church was full of people. The people with reverence crowded around the Elder to receive his blessing, and the priest, having celebrated the Divine Liturgy, and embracing the Elder, indicated to him their mutual joy and told those who stood nearby that such a great gathering of people was the fruit of Fr. Nazarius’ prayers. The church could no longer hold the multitude of people, who filled even the church steps.

Having spent some time in that village, Fr. Nazarius begged both the pastor and his flock to continue and grow from this good beginning, devoutly fulfilling their obligations. Then Fr. Nazarius made ready to depart. He was accompanied with tears by the priest with all his parishioners, who had gathered to bid farewell to their Elder, Father, and benefactor (for so they began to call him). They accompanied him for several miles from the village, and the priest remained in correspondence with Fr. Nazarius and to his very death took advantage of his counsels. His Holiness Patriarch Kirill consecrated on Valaam chapel in honor of All Saints of Valaam
“May God help you, continuing the tradition of our ancestors, to strengthen the Orthodox faith and piety in our people and to pray to God that the Lord would hear our prayers and grant His grace,” His Holiness said in conclusion, addressing himself to the brothers of the monastery. "A Theologian by Virtue of Thy Life in God"—St. Nazarius of Valaam
Deacon Aaron Taylor
St. Nazarius was first and foremost a solitary ascetic and afterwards a father of monks. When he re-established Valaam, he took care to reintroduce all three modes of monastic life: coenobitism, the skete life, and anchoretism. According to his Life, “He began the building of the Great Skete in the woods beyond the Monastery enclosure as well as other sketes, and encouraged anchorites—making himself the first example of eremitic life.” As a “monk’s monk,” St. Nazarius was different from many of the famous elders of subsequent decades. Some rare books in the Russian Presidential Library have become accessible to the general public
The Russian Presidential Library has digitalized the materials connected with the history of Valaam and made them accessible to the general public on the website. These form a collection called “The History of the Russian Orthodox Church” which is one of the largest among the 400,000 books in the first national electronic library, reports its official website.
Comments
×