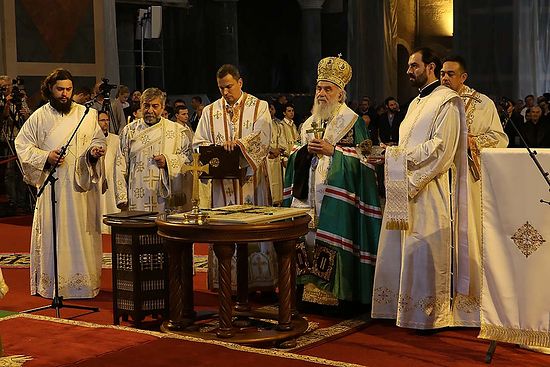 Photo from the site of the Serbian Orthodox Church

May 22, 2017 is a day that will be recorded in the annals of the Serbian people’s beloved temple of St. Sava on Belgrade’s Vračar plateau. On this day, the first stones of the mosaic in the church’s dome were placed, reports the site of the Serbian Orthodox Church.

During a special prayer service, in the presence of the hierarchs of the Holy Synod of the Serbian Orthodox Church, Patriarch Irinej himself placed the first stone into the mosaic of the Ascension that will adorn the inside of the cupola of the massive St. Sava’s Cathedral. 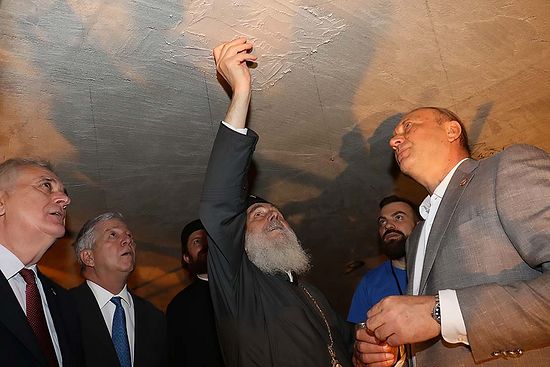 Photo from the site of the Serbian Orthodox Church

During the ceremony, the Holy Synod awarded Alexander Djukov and G. Kirill Kravchenko, top officials of the Russian Gazprom Neft oil company, with the high decoration of the Order of St. Sava, second degree, for their great contribution to the construction of the St. Sava church. Earlier a donation agreement had been signed by the Society for the Construction of the Church of St. Sava, Gazprom Neft, and a Moscow-based international fund for assistance to UNESCO.

Russian specialists have created unique and unprecedented large-scale icons for the looming Cathedral of St. Sava on Belgrade’s Vračar plateau. A solemn presentation of the mosaic decorations for the dome in St. Sava’s took place on December 3, 2016, with the participation of Serbian president Tomislav Nikolic.

St. Sava’s Cathedral was conceived of as the patriarchal church for the Serbian Orthodox Church, and is the largest Orthodox Church in Europe. Its construction began in the 1930s on the place where the relics of St. Sava (1175-1236), the founder and first primate of the autocephalous Serbian Orthodox Church, were burned by Turkish order. After the 1941 bombing of Belgrade construction on the temple ceased altogether, resuming only in 1985. The inside surface area for mosaics is 183,000 square feet. Russian artists create unique icons for Belgrade cathedral
Russian specialists have created unique and unprecedented large-scale icons for the looming Cathedral of St. Sava on Belgrade’s Vra&#269;ar plateau. The mosaic design for the Belgrade church was decided upon at a recent Moscow session of the special commission for adorning the church. Preparations for mosaics begin in Belgrade's Saint Sava Cathedral
The year 2019 is especially important for our people and for the Saint Sava Cathedral, as the 800th anniversary of the autocephaly of the Serbian Church will be celebrated then
Comments
×