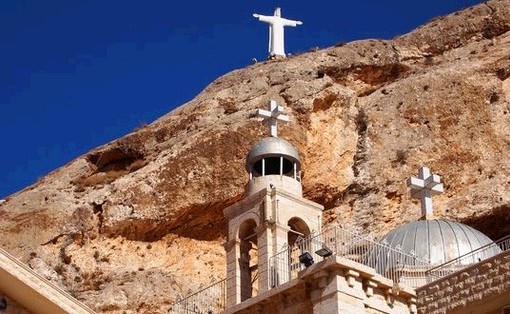 The Stavropol Cossacks are planning to travel to the ancient Christian city of Maaloula in Syria in order to explore and examine the historical texts in the Aramiac language, in an effort to help the Syrians preserve their venerable Christian heritage, reports Interfax-Religion.

“After the destruction perpetrated by the terrorists in the city, we believe it is necessary to go there and begin working on the written monuments in the Aramaic language, the language of Christ, which the militants failed to destroy,” said the deputy of the ataman of the Stavropol Cossack Society Dimitry Tarasov. “Additionally, we want to record conversations with local residents who speak a modern dialect of Aramaic,” he continued.

Following their research, the documents will be published and made freely available on the internet, with both original texts and translations. Support for the Cossacks’ work will be rendered by Stavropol and Moscow universities and the academy in Maaloual where Aramaic is taught.

ISIS invaded the small town on September 5, 2013, going on a rampage against Christian people and buildings, destroying all holy sites in the city. 3,000 fled the city, leaving only Muslims and St. Thekla Monastery’s forty nuns, twelve of whom were kidnapped by ISIS in early December of the same year. The nuns were released in March, 2014.

In April, deputies of the Russian State Duma proposed replacing the bells at St. Thekla Orthodox Monastery in Maaloula, Syria. “We, the members of the committee and panel for the protection of Christian values have addressed the patriarch with an offer to replace the bells in place of those earlier stolen from the Monastery of St. Thekla,” said Sergei Gavrilov, head of the Duma committee for the development of civil society and religious organizations. Russian deputies become first pilgrims to Syria's Maaloula
"It is hard to describe what we have seen here. The holy places are destroyed, and the churches are burnt. A fire was deliberately started at the place where St. Thekla's remains, cherished by Christians worldwide, were held in the St. Thekla Monastery. All this is happening in the 21st century," Sablin said.

Syria Christians targeted for supporting Assad
While Syria has turned into the scene of deep and spiteful aggression by the United States and its allies, Christians in this country are facing very difficult conditions.
Comments

Theodore5/25/2017 9:50 pm
I am a Lebanese/Syrian Christian and I love Russia. Syria belongs to us Christians, come and help us eliminate the terrorists who are the cause of so much evil, as well as their sponsors, all Western governments and (((Israel))), which back the terrorists with money, intelligence, lies, and weapons. Eternal damnation is the lot of them all, and I would doubt the Christianity of one who thinks even a single US senator or EU politician will go to heaven.