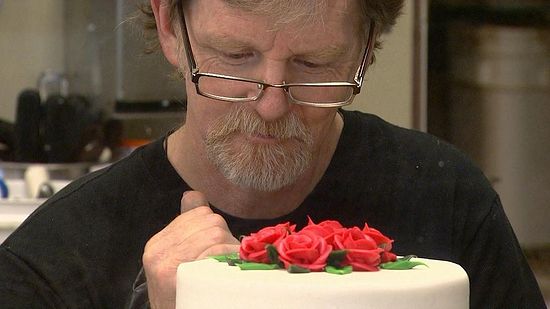 The Supreme Court announced on Monday that it will hear the latest religious freedom case, involving another incident of a Christian baker refusing to bake a cake for a gay wedding, Fox News reports.

Jake Phillips, owner of Lakewood, CO’s Masterpiece Cakeshop, declined on the basis of his Christian faith to bake a customized cake for the gay union of David Mullins and Charlie Craig in July 2012. The custom cake designer of 22 years informed the couple that to create a cake honoring a gay marriage would conflict with his religious beliefs, but that he would be happy to create other types of cakes for them.

Rather than find another bakery, the couple decided to punish Phillips for holding to traditional Christian principles and filed a complaint with the Colorado Civil Rights Commission, which found that Phillips had violated the Colorado Anti-Discrimination Act, reports CNN. Mullins and Craig could have walked to Elegant Bakery, a 4-minute walk from Masterpiece Cakeshop, which also offers custom wedding cakes.

Phillips was ordered by the Commission to change his policies and provide employee training on discrimination, and to provide quarterly reports for the next two years on his compliance with the commission’s demands, according to ChristianHeadlines.com.

The state of Colorado itself did not permit gay marriage at the time of the incident, but lower courts still upheld the commission’s demands, ruling in favor of the couple, who were planning to marry in Massachusetts and return to Denver for a reception. The Colorado Supreme Court declined to hear the case.

The federal Supreme Court will now decide whether applying Colorado’s public anti-discrimination law, which covers people on the basis of sexual orientation, to compel the baker to participate in a gay wedding by personally creating a cake that honors that wedding violates his constitutionally-protected Christian beliefs on marriage.

“Whether it’s a photographer, or a cake maker, or a t-shirt designer, they’re engaged in expressive activity,” said John Eastman, a professor and former dean at Chapman University’s School of Law. And in the case of “t-shirts or language on a cake,” Eastman added, “it’s actual speech.”

Masterpiece Cakeshop, Ltd. v. Colorado Civil Rights Commission, set to begin in the court’s fall term, is only the latest in a long string of attacks on Christian business owners whose beliefs do not allow them to participate in gay weddings. Several other bakers have also been sued, often receiving massive fines and being forced to close their businesses (see here, here, here, and here). Christian photographers, and florists are also at risk of discrimination, including the sad case of Baronnelle Stutzman of Arlene’s Flowers in Washington, who was sued by a man who had been her friend for a decade for declining to make his gay wedding bouquet. Ontario passes law allowing authorities to take children from Christian homes
The new bill, which replaces the previous Child and Family Services Act that governed child protection services, and adoption and foster care services, adds “gender identity” and “gender expression” as factors to be considered “in the best interests of the child.” Gay man sues his florist friend, court forces her to participate in gay weddings
Another ruling has come down in the recent string of American judicial attacks on Christianity. The Washington Supreme Court ruled Wednesday in the case of Ingersoll v. Arlene’s Flowers that business owners are not free to act according to their religious conscience.
Comments
×