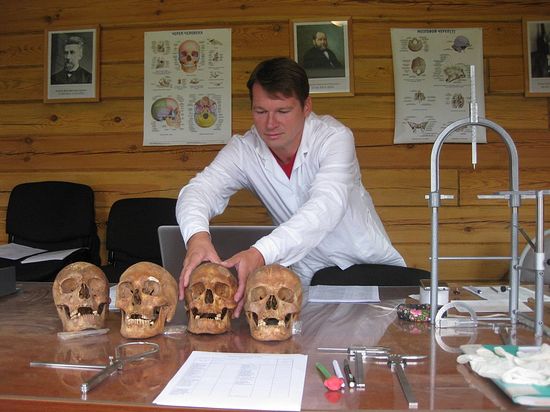 In the course of the examination of the “Ekaterinburg remains,” believed by many to belong to Tsar Nicholas II and his holy family, Russian researchers have identified similar features on the skulls of Tsar Alexander III and that presumably belonging to Tsar Nicholas II, Denis Pezhemskii, a member of the patriarchal commission for the study of the remains and biology kandidat and anthropology expert, stated in an interview with pravoslavie.ru.

The Russian Orthodox Church earlier announced that it had received permission from the Russian Investigative Committee to release the results of the examinations of the Ekaterinburg remains.

“We have implemented several new techniques. In particular, we have examined the skulls’ anatomic abnormalities, which can be inherited and have no impact on health,“ Pezhemskii said.

The researcher explained that some people may have “an extra opening in their bones or some kind of rare seam,” and that “these small deviations from the ‘usual’ skeletal structure are usually well-defined and help to outline relations between people.”

“We haven’t found anything outstanding yet—with one exception. On skull #4 (presumably belonging to Nicholas II—Ed.) we found a small piece of intercalated bone which sometimes develops at the convergence of the occipital and parietal bones. We found the same bone on the skull of Tsar Alexander III,” Pezhemkii stated.

He also confirmed that traces of a blow from a saber were found on the skull thought to belong to Tsar Nicholas II, who had been attacked with a saber while in Japan in 1891. “This skull does have a trace from one or two successive blows with a sharp chopping weapon. This bone callous was well-healed,” the expert said.

“We found traces of a blow from a sword on the head,” famous Russian criminologist Vyacheslav Popov earlier reported. As the expert noted, in 1991 they had meticulously searched for traces of blows on the supposed skull of Tsar Nicholas, but mistakenly looked on the wrong side, thinking the then-tsarevich was struck on the left side by a saber in the 1891 attempt on his life by one of the police escorting him while on visit to Japan. According to him, modern x-ray studies have revealed, however, two longitudinal grooves which are evidence of a healed injury.

“We… studied the structure of the bone tissue, which is different at the edges. It’s safe to say that this is a fracture made while the person was still alive, it’s an old fracture, and it corresponds to a blow from an elongated cutting instrument, for example a saber,” Popov reported.

Despite these findings, Perezhenskii has urged all to wait for the results of the genetic examinations, as, according to him, genetics have “a much stronger evidence based.” The genetic analysis is nearly complete according to him. Illuminated and Radiant: the Royal Martyrs
Archpriest Artemy Vladimirov
On July 4/17, we honor the memory of the Royal Passion-bearers, murdered in 1918: Tsar Nicholas Alexandrovich II, his wife Alexandra Feodorovna, and their children—Tsarevich Alexei and the Grand Duchesses Olga, Tatiana, Maria, and Anastasia. Archpriest Artemy Vladimirov speaks about the example given to us by the lives and deaths of the holy Royal Martyrs. Church to announce results of examinations of “Ekaterinburg Remains” in second quarter of 2017
As for whether or not the remains will be acknowledged as holy relics, according to him, “only the Bishop’s council will make the final conclusions.”
Comments

Where did he get all those death dates?

I don't remember what exact date my great grandmother died but I think it 1986. Alexei died a few years after his mother but I can't tell you that date, either. He never married. No children. But my older brother, Mike, looks a lot like him. I'm a doppelganger for my great grandmother, Tatiana, and my son, Curtis looks just like Nicholas and young Alexander.

We only have pictures for Alexandra, either Maria or Olga, Tatiana, Alexei, and Anastasia, and they all look exactly like their pictures from Russia. My youngest son looked a bit like Alexei at 6. He looks more like Wilhelm, last Crown Prince of Germany as a 17 yr old now, and my brother, Shane is somehow a doppelganger for Princess Alice. My mom's mom was named Alice in her honor. We only just found out by looking through photographs who we are. We were only ever told that Queen Victoria was our grandmother every time we passed her statue in Victoria Park by my great grandmother's house. Honestly, we didn't believe her til about six months ago when I started looking through photographs of Queen Victoria's children and grandchildren. It took a lot of praying to find who we were! It's pretty weird for us that everyone believes the bones are authentic! You're welcome to look at my pictures on Facebook. Tamara Hussey. You'll know it's me. All the royal photograph compilations mixed with our photos. There are quite a lot! You can't mistake them for anyone else! So weird geneticists actually think those bones were them! Still shaking my head. There are a lot of Tamara Hussey Facebook identities. You might not see it...hmmm... I put filters on that only friends of friends could add me. Try anyway. Good luck.

Seraphim9/17/2017 10:39 pm
There are so many crazy theories surrounding this tragedy. Russians in particular seem to love this stuff. Its worth reading the huge book of diaries and notes of Nicholas Gibbes which appeared in Russian a few years ago. Gibbes was one of the first people back into the Ipatiev House and was involved with the initial investigation. His reliability is beyond question.

According to the bizarre theory that the Romanovs were not murdered but lived in the US and elsewhere, this would mean that some of them were still alive when they were canonised!

Harry M Binkow9/14/2017 4:42 pm
All lies! Complete nonsense! The similarities are those of one of the eight sets of doubles, the Filatovs! This is forgery! No one in the Imperial Fmaily were murdered! They lived for decades in Europe and America!

Such shame you place on these people!