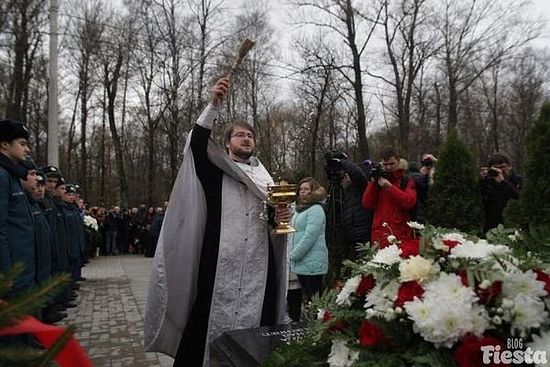 A monument to the victims of the 2015 terrorist attack against an A321 airbus over the Sinai Peninsula was opened in St. Petersburg’s Seraphimovsky Cemetery on this past Memorial Saturday, reports patriarchia.ru.

On October 31, 2015, an airbus A321, operated by the Kogalymavia airline, crashed in the Sinai Peninsula en route from Sharm El Sheikh (Egypt) to St. Petersburg. All 224 people on board, including the crew members and passengers, were killed. Two weeks after the tragedy the Russian authorities classified the catastrophe as an act of terrorism, concluding that a bomb had detonated on board during the flight.

Of the 224 victims, the remains of 7 were not able to be identified. The unidentified fragments were buried on the cemetery’s central alley on May 20 this year. A memorial in the shape of the airplane that was flying from Sharm El Sheikh to St. Petersburg was also placed on this spot.

A panikhida was celebrated by Fr. Sergei Kubishkin of the Trinity-Izmailovsky Cathedral and future rector of the Church of the Great Martyr Demetrios of Thessaloniki which will be built in memory of the victims. The ceremony was attended by a number of local officials, including Governor George Poltavchenko of St. Petersburg.

“The two years which have passed since the terrorist attack in the Sinai Peninsula skies have flown by like one moment for all those standing here,” said Fr. Sergei. “Time dos not heal, and the relatives of the departed feel it in their own bitter experience. Today is St. Demetrios Memorial Saturday, a day of special commemoration for the departed, and the entirety of our Church is praying for them,” he continued.

Fr. Sergei also noted that all churches in St. Petersburg were serving panikhidas that day for the repose of the A321 victims, which includes 25 children.

“Terrorism is a terrible evil, and those who do it are trying to sow despair and fear, but they will never succeed. We will always pray for the reposed and do good works in their memory. Time does not heal, but prayer and good works heal our souls,” Fr. Sergei affirmed.

Memorial wreaths and flowers were laid following the consecration of the monument. Church complex in memory of A321 crash victims to be built in St. Petersburg

Church complex in memory of A321 crash victims to be built in St. Petersburg
On October 31, the first anniversary of the tragedy, a foundation stone will be laid on the site of the future church and a memorial cross will be blessed. There is as yet no information about the length of the construction project. The church will be built with funds from benefactors.
Comments
×