First sign language Liturgy in Cyprus to be celebrated 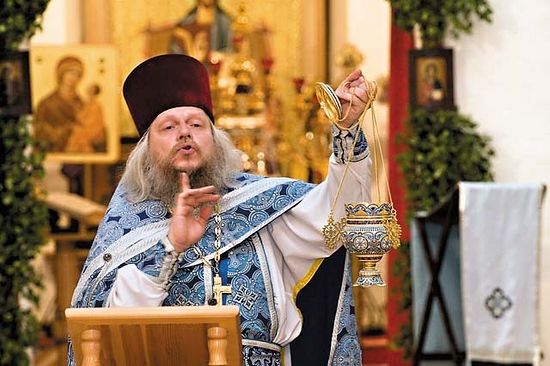 A Divine Liturgy will be celebrated this Sunday with simultaneous sign language interpretation for the first time in Cyprus. The Diocese of Tamasos and Orinis has invited a theologian well-versed in Greek sign language to come from Greece for the service in St. John Chrysostom Church in Lakatamia in the Nicosia district, Cyprus Mail Online reports.

According to parish priest Fr. Kyriacos Kasparis, the interpreter is scheduled to come once a month at first, eventually increasing to once every two weeks plus major holidays, depending on his schedule.

“This arrangement is aimed at satisfying the needs of the deaf faithful who have never had the opportunity to follow a liturgy and have someone explain to them the deeper meanings in their own language,” Fr. Kyriacos said. Seventeen have expressed interest in coming so far, but more are expected. “We have already invited several people and informed deaf organizations and we have also made announcements in the media,” the priest said.

The theologian will stand on a podium to be visible to as many people as possible. After the service, guests will be treated to breakfast in the church hall, with the opportunity to ask questions about the Orthodox faith through the Greek theologian.

The diocese has also invited a Cypriot woman to learn from the Greek interpreter, to eventually take his place when he cannot travel from Greece. If all goes well, the diocese also plans to start a Sunday school for deaf children.

The video below from the Tbilisi Times also shows a Georgian Orthodox priest signing the Divine Liturgy: Pat. Kirill blesses future site of deaf-blind children’s rehab center
His Holiness Patriarch Kirill of Moscow and All Russia visited the Ministry of Labor and Social Protection’s federal state budgetary institution the “Sergiev-Posad Boarding House of the Deaf and Blind for Children and Young People with Disabilities” on Saturday, where he blessed the future site of a social rehabilitation center for post-residential support for the deaf and blind. Boarding home for deaf and blind given relief icon

Boarding home for deaf and blind given bas-relief icon
The icon was made in the high bas-relief style. The icon is available to a wide range of parishioners, especially those with impaired vision and the blind. It is large, with a height of 43 inches and a width of 37 inches. Moscow church creating video guide to Moscow monasteries for the deaf
The patriarchal podvoriye Church of All Saints Who Shone Forth in the Russian Land in the Novokosino district of Moscow is launching a new missionary project focused on the deaf and hearing impaired.