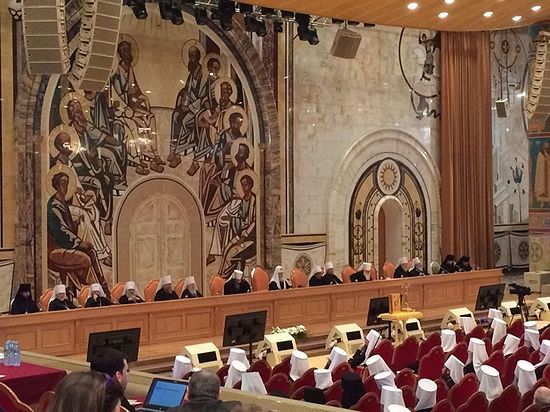 Among the topics to be discussed by the hierarchs of the Russian Orthodox Church who are meeting in Moscow beginning today is the documents of the council held on the island of Crete in the summer of 2016, Fr. Alexander Volkov, press secretary for Patriarch Kirill, stated at a press briefing today, reports RIA-Novosti.

The Council of Bishops, one of the highest bodies of Church governance according to the statues of the Russian Church, meeting every few years, opened today in the Hall of Church Councils in Moscow’s Christ the Savior Cathedral, under the chairmanship of His Holiness Patriarch Kirill of Moscow and All Russia. The previous such council convened in February 2016.

The bishops will discuss and come to decisions on matters of doctrine, religious and Church life, and moral themes, including the six documents of last year’s highly controversial Crete Council which had initially aimed to be a Pan-Orthodox Council. In the end, 10 of the 15 Local Churches of the Orthodox world participated, with the exception of the Russian, Georgian, Bulgarian, and Antiochian Churches, and the Orthodox Church in America, which had not been invited to the event.

“We can expect some kind of decision or conclusion of the entire Council of Bishop to be made on this subject,” Fr. Volkov said in response to journalists’ questions.

The Council of Crete took place in the summer of 2016, under the chairmanship of His All-Holiness Ecumenical Patriarch Bartholomew of Constantinople. The participants adopted six documents and delivered a message which speak to important events and problems of the modern world, including fasting, Church autonomy, the Orthodox diaspora, the Sacrament of Marriage, the Church’s mission in the modern world, and relations between the Orthodox Church and non-Orthodox Christian confessions.

The last three documents have proven to be controversial, and especially the last two, with many hierarchs, clergy, monastics, and laity throughout the Orthodox world objecting to ecumenistic ideas and wording present in the articles. There have been various other objections to the method and conclusions of the council. For more information, see the collection of articles from before, during, and after the council which can be found here.

The Russian Orthodox Church had made a last-minute decision to stay away from the Crete Council in a bid to avert a split, Pat. Kirill later stated.

“The Serbian Orthodox Church said that it was necessary to postpone the Council. The Bulgarian Church refused to attend the gathering. The Church of Antioch and the Georgian Church followed suit. When we received all that information, we sent a letter to Constantinople suggesting that an urgent pan-Orthodox conference be convened to discuss our future steps and decide on what we are supposed to do because it was impossible to assemble the Council without consensus,” Pat. Kirill said.

“We stated once again that the documents which were supposed to be presented to the Council (on Crete) did not suit us in their present form and that we had serious amendments to those documents. We received a very impolite reply, which said that the Council would take place anyway,” the Russian primate added.

The Holy Synod of the Russian Orthodox Church recognized the gathering of several Orthodox Churches on the island of Crete as an important event, while noting that it cannot be considered a pan-Orthodox event, due to the absence of five Local Churches which represent the majority of Orthodox Christians worldwide.

“The Holy Synod determined that the Council, which took place in Crete, cannot be regarded as pan-Orthodox, and the documents it approved as expressing a pan-Orthodox consensus,” said the head of the Synodal Department for Church, Society and Media Relations Vladimir Legoyda, commenting on the results of a Synod meeting in July 2016. Message of His Holiness Patriarch Kirill to Primates and representatives of Local Orthodox Churches who have assembled in Crete
His Holiness Patriarch Kirill
It is my profound conviction that the Churches, both those who have decided to go to Crete and those who have refrained from it, made their decisions in good conscience, and for this reason we must respect the position of each of them. Metropolitan Hilarion of Volokolamsk: Voices of the Churches should not be disregarded
"We were willing to turn a blind eye to the existing problems for the sake of peace and unity and have been preparing to participate in the Pan-Orthodox Council till the last moment. At the Bishops’ Council we took the decision to participate and appointed the delegation. Only after we had learned that the Bulgarian, Antiochian and Georgian Churches would not participate in the Council, and the Serbian Orthodox Church proposed to reschedule, we understood that the question of our participation must be resolved by the Synod. We have resolved the question today." Patriarch Kirill: We do not call the forthcoming Pan-Orthodox Council ecumenical
Ecumenical Councils and some other Councils of pan-Orthodox significance are a visible expression of the unity of the Church, her conciliar nature, a reflection of her self-awareness as one body in Christ (cf. Rom. 12:5).
Comments

Editor11/29/2017 7:50 pm
Steve, that was an error that we thought had been fixed before publication, but I guess not. Thanks for pointing it out for us!