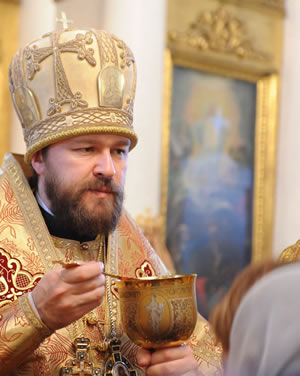 Metropolitan Hilarion of Volokolamsk, chairman of the Moscow Patriarchate’s Department for External Church Relations, said in his comments on the Holy and Great Council of the Orthodox Church that the situation that has come about is not catastrophic. The Holy Synod of the Russian Orthodox Church at its session on 13 June 2016 discussed the situation as it has developed due to the refusal of certain Local Orthodox Churches to participate in the Pan-Orthodox Council which was to be held on Crete on June 18-26, 2016.

On the results of the discussion the Holy Synod adopted the Statement which was sent to the Primates of the Local Orthodox Churches. Members of the Synod believe that the only possible decision is to continue preparation for the Holy and Great Council and to reach Pan-Orthodox consensus on its convening at another time.

‘We have been preparing the Pan-Orthodox Council together, but failed to satisfy all Churches," Metropolitan Hilarion said. "I believe that we should draw a lesson from this and understand that voices of the Churches should not be disregarded. If a Church expresses her concern over something, this concern should be resolved; if a Church proposes amendments, one should be more considerate towards them."

Metropolitan Hilarion believes that the situation has developed because certain problems had been left in abeyance. "For instance, the Antiochian Church did not want to transfer the discussion of the jurisdiction over Qatar to the period after the Council. The Antiochian Patriarchate is confident that the Council should manifest the Pan-Orthodox unity. The unity of the Church is expressed in concelebration of the Liturgy, and if one Church cannot take part in the Eucharist, it shows an emergency situation which should be resolved before the Council."

"We were willing to turn a blind eye to the existing problems for the sake of peace and unity and have been preparing to participate in the Pan-Orthodox Council till the last moment. At the Bishops’ Council we took the decision to participate and appointed the delegation. Only after we had learned that the Bulgarian, Antiochian and Georgian Churches would not participate in the Council, and the Serbian Orthodox Church proposed to reschedule, we understood that the question of our participation must be resolved by the Synod. We have resolved the question today."