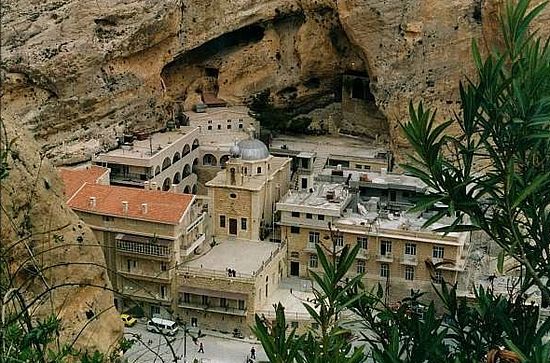 Holy Trinity Monastery in Ryzan, Russia has launched a humanitarian aid drive for their suffering brothers and sisters in Syria. The aid is to be sent in time for Pascha, according to the monastery’s website.

The collected goods will be sent to the Monastery of St. Thekla in Maaloula, where services are still conducted in the ancient Aramaic language, spoken by our Lord Jesus Christ Himself during His earthly life. The charitable Paschal drive has been launched with the blessing of His Eminence Metropolitan Mark of Ryazan and Mikhalovsk.

The clergy and parishioners of Ryazan churches are collecting candy, baby food, hygiene products, clothes, blankets, stationery, and toys for the suffering faithful in Syria. The collection will continue until April 1.

The Monastery of St. Thekla is a UNESCO World Heritage Site. ISIS invaded the small town of Maaloula on September 5, 2013, going on a rampage against Christian people and buildings, destroying all holy sites in the city. 3,000 fled the city, leaving only Muslims and the monastery’s forty nuns, twelve of whom were kidnapped by ISIS in early December of the same year. The nuns were released in March, 2014.

In April, deputies of the Russian State Duma proposed replacing the bells at the monastery. “We, the members of the committee and panel for the protection of Christian values have addressed the patriarch with an offer to replace the bells in place of those earlier stolen from the Monastery of St. Thekla,” said Sergei Gavrilov, head of the Duma committee for the development of civil society and religious organizations. Orthodox children in Latakia, Syria receive Christmas gifts from Moscow
The Russian Center for the Reconciliation of Warring Parties and the All-Russian Veterans’ Organization “Combat Brotherhood” recently delivered Christmas gifts and school supplies collected by the Sunday School children and parishioners of Moscow’s Church of the Resurrection on Dormition Ravine to the Sunday School of the Antiochian Church of St. John the Forerunner in Latakia, Syria.