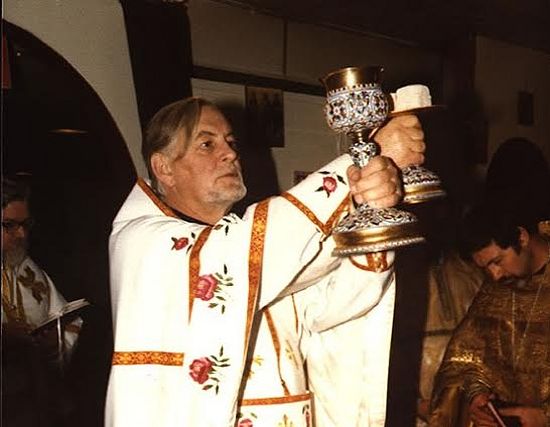 This month marks the 35th anniversary of repose of one of the most visionary priests of the twentieth century, Fr. Alexander Schmemann. And rather than relate biographical details, I’ll tell about him by reflecting on a key element of his preaching and teaching.

Why? Because gratitude is the most basic element of our humanity – since we were created to give thanks and glory to our Maker, for (for starters) the gift of existence itself. Thus, Fr. Schmemann called man a “eucharistic and doxological being” – a thanking and praising creature.

And this isn’t just what we were created for in Paradise. It’s at the heart of the Paradise to come: the Kingdom.

Sometimes, we create our own ideas of what “Heaven” will be like. Even for Christians, these often have little to do with Scripture – like that vision of Isaiah where he’s taken up to behold angels ceaselessly proclaim “Holy, Holy, Holy. Lord of Hosts. Heaven and earth of full of Thy glory.”

These words were once part of every worship service (Liturgy or Mass), in East and West – the reason being that Isaiah’s vision was a taste of the Kingdom, and worship a foretaste.

But often, ceaseless thanks and praise to God aren’t what we think of when we imagine Heaven.

A clergy friend once had a parishioner tell him, “Father, Orthodox services are too long. They’re boring.” And my friend had heard this enough, from enough people, that he decided to push back.

“Do you want to go to Heaven?” he asked. The person nodded – probably assuming, with a spiritual roll-of-the-eyes, that what he meant was: you must attend church if you hope to be rewarded with Paradise.

But the intent was far more forceful, and less transactional. “Do you know what that Heaven you claim to want is going to be like?” the priest continued. “It’ll be an eternal Liturgy before the throne of God. And we only pray He’ll give us enough love and gratitude to continually offer Him thanks.

But if you think our two-hour Liturgy here is boring – you’re going to be bored to death, in the Kingdom. In fact, you might even find it ‘boring as Hell.’”

I don’t suppose Father Schmemann would’ve put it exactly that way. But I image he would’ve basically concurred. To be grateful to God who made us, and express this gratitude in true worship, is to have the Kingdom within – to have one foot planted there, now, and image on earth what the angels do in Heaven.

Words fail me to thank and praise Fr. Alexander Schmemann. But whenever I celebrate the Liturgy with joy, and recognize this act as the purpose of my being, I think of him. “Glory to God for All Things”
St. Ignatius (Brianchaninov)

“Glory to God for All Things”
St. Ignatius (Brianchaninov) on thankfulness to God
Priest Valery Dukhanin
Ingratitude is the same as unbelief. Giving Thanks to God by the Way We Live
Chris Avramopoulos

Giving Thanks to God by the Way We Live
Chris Avramopoulos
Thankfulness is a state of being and a way of life for all Orthodox Christians, for you and me. A thankful spirit is a key characteristic of a Christian. It sets us apart from the world. It makes us different. Thankfulness is more than a comparison of our own circumstances to someone else's. It is more than having enough food to eat, a nice home, good health, or financial security, because any of these can be lost in an instant. Thankfulness is being grateful to God for who we are, His sacrifice for us, and the hope and joy of everlasting life.
Comments

Anthony12/21/2018 9:36 pm
Beloved friends! I greet you! And to add to the comments of the beloved kommentariat below, here is the link to Fr Michael's superb critique of Alexander S., about whom for some reason unbeknownst to me, this site likes to promulgate articels more frequently than would otherwise be sufficient. Tragic. Truly tragic. http://orthodoxinfo.com/phronema/pom_lit.aspx

Also worth looking at is Post-Patristic Theology from A Church Perspective and The Dangers of Parisian Theology by By His Eminence Metropolitan Hierotheos of Nafpaktos.A very good analysis of Fr. Schmemann's "visionary" theology bred and fostered by his mentors while at St.Sergius School in Paris, the infamous"Paris School"of theology and the Marxist"Fr. Sergius Bulgakov,condemned by the Russian church both in the Soviet Union and in the free world." This quote by Blessed Fr.Seraphim Rose from "Not of This World." This Fr.Sergius was also called a heretic by St. John Maximovich and it was Fr.Schmemann who spearheaded Fr.Georges Florovsky's exile from St.Vladimir's later in the US.Go figure.

Riassaphore-monk Anthony12/21/2018 4:17 am
Instead of posting this, you should post Fr Michael Pomazansky's critique of Fr Alexander Schmemann as he was by all means a "visionary," but by no means a good one!
×